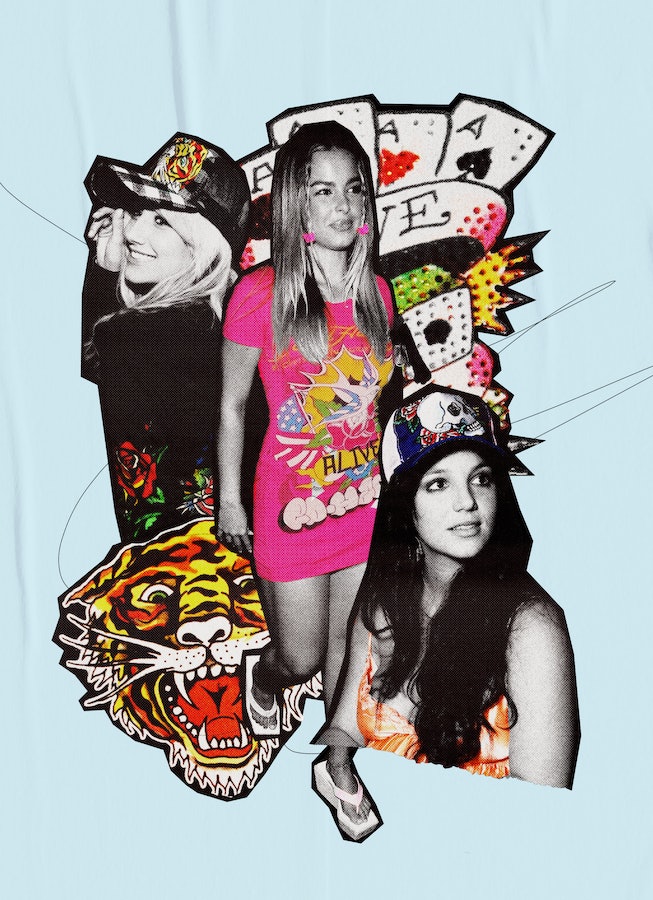 They say hindsight is 20/20. And as the early aughts slip firmly into our cultural rearview mirror, it seems as though we’re finally gaining some perspective on and collectively reconsidering the decade. As Paris Hilton, Britney Spears, and Megan Fox have all recently demonstrated, there’s much more to the pop culture phenomena of that era than initially met the eye. That goes likewise for one of the decade’s most infamous fashion labels: Ed Hardy.

For those older than 25, that name likely conjures imagery of rhinestones, studs, clashing neon prints, and more than a few midlife crises. But under the guidance of Creative Director Kevin Christiana, over the last two years, Ed Hardy has managed to find renewed popularity amongst Gen Z shoppers simply by returning to its founder’s roots in the tattoo world.

Christiana explains that people tend to think of Hardy as either the brand’s designer, dead, or just a fictional figurehead, but in reality, “he’s a sculptor, he’s a painter, he’s a pioneer in the tattoo industry, he’s real, and he’s cool as hell.” So, to execute his renewed vision for the brand, Christiana wanted to “align more with Ed Hardy’s art than the previous brands. I think that authenticity is really important. He’s the name on the label, it’s his artwork, and that’s what I want to see come to life.”

Christiana was perfectly suited for this particular challenge as his background in fashion design comes with a rock-and-roll pedigree, designing various music-inspired collections with Tommy Hilfiger, as well as The Rolling Stones, and working closely with Adam Levine for almost seven years on his menswear line for Kmart. But he confesses that despite being a seasoned industry pro, he was still hesitant about the prospect of bringing back Ed Hardy apparel. When Mark Levy, the president of Revise Clothing, first asked if he’d be up for the task of creative director, Christiana tells NYLON, “I hesitated and I cringed, like, really?” But both quickly realized the brand’s untapped potential and that they were just the tattooed guys for the job.

Levy and Christiana set up a meeting with Iconix Brand Group, the owner of the Ed Hardy brand license, and “before you know it, we’re all on a plane going to San Francisco to meet with Ed Hardy in this old school speakeasy that’s his art studio.” Once there, Hardy regaled them with one incredible story after the next and even convinced both men to let his son, Doug Hardy, tattoo a classic skull design on them. The designer recalls, “The only thing I could think the whole time was, this collection better be authentic. This sh*t needs to be authentic. The brand before wasn’t about Ed’s story.”

Christiana makes it clear, however, that while the aughts iteration of the brand may not have been true to its real-life namesake, he has nothing but respect for his predecessor, Christian Audigier, the late Los Angeles designer who helped popularize both Ed Hardy and Von Dutch during the early 2000s. He passed away in 2015.

“The thing about Christian Audigier is he was a master at marketing. He was a master at pulling celebrities together, bringing a story together,” Christiana explains. “It wasn’t even about the clothes; it was about his personality. I’m not going to ever knock him or put him in this bucket of the past. He built an empire, end of story.” He adds that people still don’t quite realize just “how big of a brand Ed Hardy was” in the aughts and the precedent Audigier set in terms of just how successful a fashion label could be. He also credits Ed Hardy under Audigier’s leadership with opening the door for today’s high-fashion streetwear.

However, Christiana confesses that reckoning with the legacy of this brand still makes him a bit nervous. “At the beginning of this, I was like, no rhinestones! But now we want to reintroduce it in a tasteful way,” he says. “You don’t show all your cards at the beginning of a poker game. You have to feel everybody out and then see what people are responding to because every time you blow something out too fast, it just falls even faster.” They were even hesitant about putting that iconic script logo on their initial designs for fear it would deter customers who still had bad memories of it from the mid-aughts. “We took a very underground, lay-low approach to bringing this brand back because no one knew what the reaction was going to be,” he says.

But ultimately, they decided to embrace the kitsch. At the brand’s launch party in June 2019, which took place at a at a speakeasy art gallery called Good Luck Dry Cleaners, they handed out mints at the launch party (to get rid of the bad taste the brand left in people’s mouths) and hung framed pictures of reality star Jon Gosselin in Ed Hardy’s signature loudly patterned tops — a moment that marked both the brand’s total saturation of American culture and its death knell.

After Ed Hardy’s soft relaunch, Urban Outfitters was one of the first stores to come calling looking to stock the brand, which is also when they knew they were on to something. “They’re like the comeback kings over there, so that was cool to get that stamp of approval,” says Christiana. But the designer adds that he believes the appeal of the brand for a younger customer goes back to the thrill of discovering its old pieces. “I think the Gen Z customer is digging up vintage Ed Hardy and testing it while they step out of the house and go places. Then, if they’re getting a good response, they’re like, ‘Oh, I’m going to get more of this!’” Which is why when creating his new collections, Christiana wanted to make sure that it all feels like a well-loved piece of vintage “dug out of their parents’ attic, dusted off, and put on.”

He’s also courting that luxury consumer, too, by elevating the brand’s signature streetwear through its line By Appointment Only, a name that pays homage to the fact Hardy founded the first by-appointment-only tattoo shop. These higher-end capsule collections that come in an edition of 50 are where some of Ed Hardy’s classic rhinestones, special washes, paint splatters, and bleach come back into play.

And, clearly, the brand’s relaunch strategy is working: Just this week, Bella Hadid stepped out in a vintage 2000s baby tee from the brand, while last month TikTok star Addison Rae attended a record executive’s birthday party wearing a hot pink Ed Hardy T-shirt dress. Madison Beer and YouTuber Niki DeMartino are also big fans, regularly being spotted in both new and vintage and designs. “Social media stars are starting to bring out the throwbacks for us, so we couldn’t ask for anything more right now. That’s free advertising,” Christiana says. It also doesn’t hurt that Y2K fashion is currently one of the biggest Gen Z fashion crazes, with Depop reporting it as one of its most searched trends with top product categories, including Ed Hardy, Von Dutch, and trucker hats.

Marian Park, a strategist in the Youth department at WGSN, adds that this return to the darker Hot Topic aesthetic of the mid-’00s is just gearing up. “From Addison Rae’s recent Ed Hardy T-shirt dress look, Willow Smith’s video collab with Avril Lavigne, to the hype around Megan Fox and Kourtney Kardashian’s style, there’s no doubt that a mid-2000s-inspired pop-punk revival is up-trending quickly,” Park explains. “Along with ongoing e-boy and e-girl subcultures, at WGSN, we’re tapping this darker twist to mid-2000s fashion to heavily impact back-to-school this season.”

This time around, however, Park notes that there’s a “glamour and sleekness that underpins it all, along with a more kaleidoscopic approach to color that looks beyond an Emily the Strange-esque monochrome. It’s mid-2000s with a Euphoria-meets-Gossip-Girl-2.0 touch that makes it enticing for Gen Z, who are revisiting mid-2000s fashion and making it their own, just like how they thrift, upcycle, and re-sell items like no other generation before them.” Park also predicts that this love for all things aughts will revive some more interesting brands from that era, particularly denim labels like Miss Sixty, Fubu, and True Religion.

For Christiana, seeing his work for Ed Hardy resonate so strongly with these high-profile stars and younger customers “is validating that what we’re feeling [at the brand] is what is starting to happen... It’s been all testing and figuring out which lane works best, and now we’re in a groove. We’re getting approached by a lot of people for collaborations. It’s very cool.”