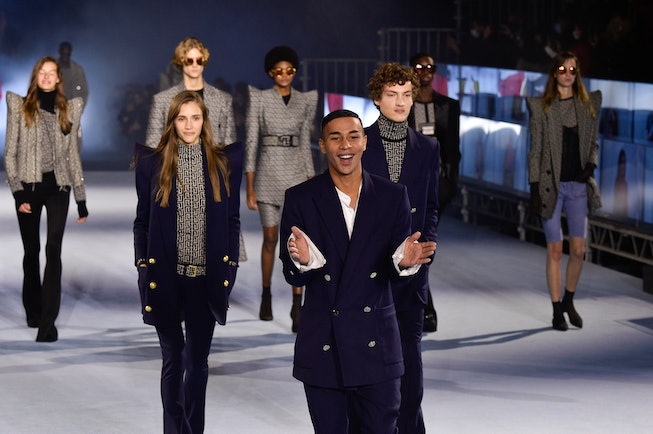 With a music festival in the works for Paris Fashion Week, Balmain and its new drama series is getting into the television game, too. The French fashion house announced the news on Monday, and the short-form show, made in partnership with the British network Channel 4, will be dropping in September.

The show, titled Fracture, will feature a star-studded cast, including singer-songwriter Jesse Jo Stark, Riverdale’s Charles Melton, 13 Reasons Why’s Tommy Dorfman, and Skate Kitchen’s Ajani Russell. The series will be divided into five 8-minute episodes, and the cast will be dressed in garments from Balmain’s Fall 2021 collection. This is the first time that a fashion house has collaborated with a broadcaster in this way.

In a recent Instagram post, Balmain’s Creative Director Olivier Rousteing wrote, “I’m so proud to announce that we have been working on creating a new BALMAIN SERIES with @channel4 called FRACTURE. New exciting project and so glad to go beyond fashion and starting to work in a new world for me. I can’t wait for you to see our new SERIES ❤️‍🔥.”

While we don’t know too much about the series just yet, the trailer revealed glimpses into the Le Rêve Motel, where the show takes place, and Stark’s character named Mya, who seems to be the leading role, alongside a colorful cast of characters.

“No one finds themselves at La Rêve, except, maybe I did, and maybe you will, too,” says Stark in the trailer. She also created original music for the show, including a new song, “A Pretty Place To Fall Apart,” which drops on Thursday, Aug. 26.

La Rêve Motel is, allegedly, an actual place, as well. According to Instagram, which leads to this website, it’s “where dreams are made and broken. Located on the outskirts of Los Angeles, Le Rêve Motel offers a safe haven for all those that have felt discarded or lost. Going beyond the traditional motel experience, this consciously-bohemian backdrop invites guests to reconnect with their youthful dreams.” And if the website isn’t solely a marketing ploy, the location could start accepting actual bookings in September.

Starting Thursday, Sept. 2, the series will stream on Fracture’s official website, and, in the meantime, you can check out the official trailer and catch a sneak peek into the Balmain wardrobe, below.