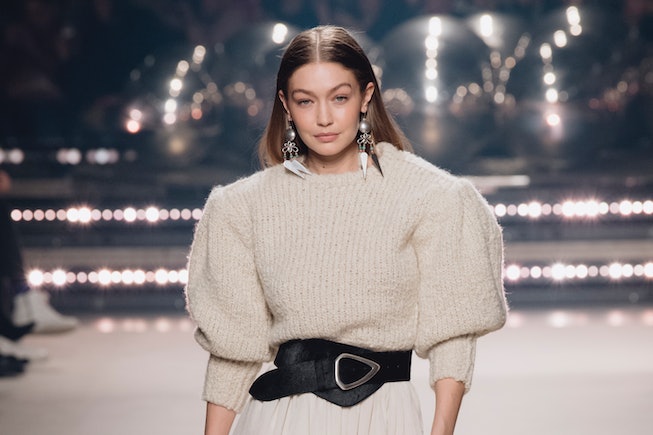 Since news broke that Gigi Hadid and Zayn Malik are expecting a baby in September, Hadid has been laying low all summer. Her few public appearances, including an interview with Jimmy Fallon for The Tonight Show, haven't revealed much about how she's been handling her pregnancy. And while the model did show off her baby bump for the first time on an Instagram Live video back in July, it was only a brief glimpse.

On Wednesday, however, Hadid officially showcased her baby bump with a proper photo shoot that took place on July 26. The dreamy black-and-white images, which were posted on Instagram, were captured by fashion photographer duo Luigi and Iango, who have worked with Hadid and her sister Bella in the past.

"growin an angel :)," wrote Hadid in her first Instagram post. More images were subsequently revealed on her feed, which she also captioned with the date of the photo shoot and "cherishing this time. appreciate all the love & well wishes ♡."

Instagram photo shoots have become the norm among celebrities who want to officially announce a pregnancy. Most recently in July, Nicki Minaj revealed she was expecting a baby with photos by David LaChapelle, complete with custom, on-theme looks, including a bra by designer Lacey Dalimonte.

See more of Hadid's photos, below, and watch her Instagram Stories for some behind-the-scenes footage.

Nearly a week later, Hadid has revealed more photos and some behind-the-scenes footage. On Monday, she posted two more images, including her wearing a long, sheer flowing army green gown, as well as a more casual ensemble that includes a white sports bra and baggy jeans. Plus, her most recent post includes three different making-of videos from her quarantine-friendly shoot, which you can view below.

Editor's Note: This article was updated to include more photos and videos from Hadid's shoot.

This article was originally published on Aug. 26, 2020