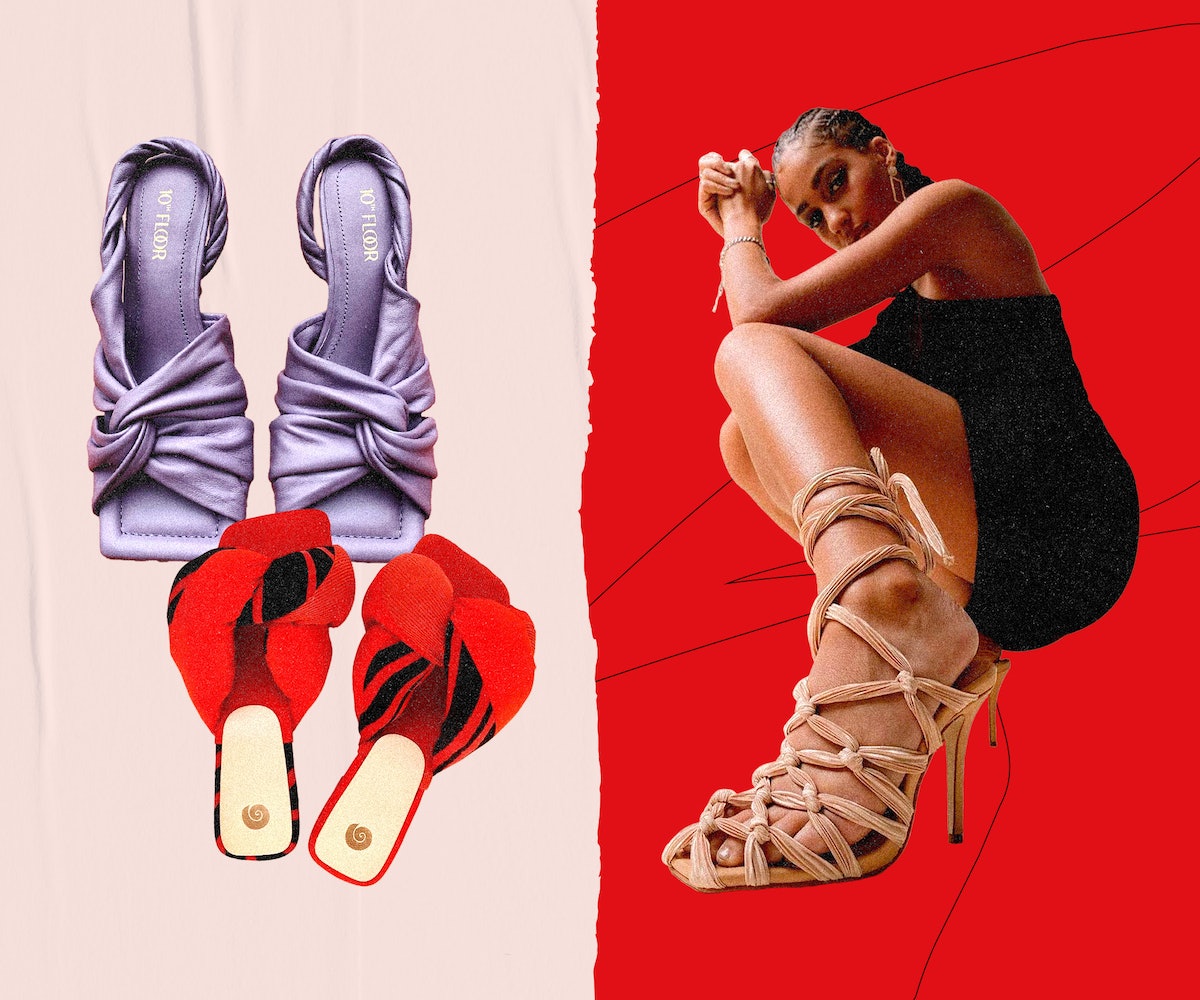 There are two types of people in the world: those who got rid their going-out heels for good, and those who are now finding any occasion to wear them on full display, even if those social plans only involve the local Target. In any case, we’ve all likely got a hankering for the anti-house slipper at this point, if only to commemorate the return to IRL events and all-night-long gatherings — because nothing says “going out-out” style like an extra 3 to 6 inches on your feet.

Up-and-coming footwear designers are fulfilling this sartorial need, leaning into the essence of playful, fun-loving “re-emergence” dressing, and the end result, of course, looks uniquely different, depending on your preferred aesthetic. There’s sky-high platforms for the brave and flamboyant, neon hues for the reformed minimalist, and imaginative plays on silhouette for the avant dresser.

Much like the modern-day take on Y2K-inspired beaded jewelry or indie designers reclaiming (and reinventing) knitwear, a wave of emerging shoe brands are beginning to take hold of our Instagram feeds right now, and in-the-know fashion enthusiasts are taking notes. It also doesn’t hurt that with a new, and frankly belated, appreciation for more walkable heels, many of these fresh offerings come with comfort at its core — all while making a major fashion statement.

Ahead, learn all about the brands and designers behind the heels that you’re going to want to wear for all of your future going-out plans.

If the return to night-out dressing for you means reaching for an eccentric heel in lieu of a classic black sandal, the Ugo Paulon brand was made for that moment. Its cloud-like, sure-to-be comfy styles have become something of an internet sensation since the brand’s launch in 2020. Immediately identified by its signature stripes, which manifest in different colorways from neutral tan to poppy red, Ugo Paulon’s shoes are simultaneously a closet upgrade and a necessary experiment in sustainability.

“My process is about working with limitations as a method to explore techniques and results within because for so long, we’ve been conditioned to believe anything should be available and within our reach in an instant,” designer Elise tells NYLON. In an effort to use as little new materials as possible, the London-based artisan predominantly creates with pre-loved materials and reclaimed fabrics.

Sleek, architectural and fun, AM:PM London’s heels go just as easily with a midi dress pairing as they do with an elevated denim ensemble. Without prior design experience, Edna Konadu brought her sketches to life in 2019 to create stylish heels you can actually wear for an entire outing. “I honestly believe my purpose as a shoe designer is to bridge the gap between style and comfort,” Konadu tells NYLON. “I saw I wasn’t the only woman who had to carry a bag big enough for my heels because I couldn’t last all night in them.”

For Konadu, unrealistic stilettos don’t equate to more fun, but what does are the brand’s thoughtfully sculpted heel silhouettes. Taking a slight turn from its neutral-toned inaugural collection without losing its easy-to-style identity, the AM:PM’s new collection, titled “Dear Girlfriend,” features a cylinder shaped heel along with what the brand calls its “whirlwind” heel in lively shades of chartreuse, orange, and lavender.

The brainchild of Fiona Brown, an Asos alum seasoned in product development and fashion buying, and Kim Kelly, who began her designing journey with sportswear, 10th Floor’s 2020 debut emerged onto the footwear scene with an experimental flare. Plus, each style’s price point rings in at under $250. “We started designing for our own label [because] we wanted fashion-forward, luxury quality and beautifully designed [shoes], but at an attainable price point,” Brown tells NYLON.

The brand’s hero piece, the Manhattan heel, features a caged toe in a crinkled, satin-like fabric — and it’s the kind of shoe that will likely welcome compliments all night long. The brand’s Instagram account gives way to what may be an unexpected reference point for its texture: oyster mushrooms. “We define our brand aesthetic as glamour with an edge,” says Brown.

Designer Dionna V. Ross pivoted from running an accessories shop to designing handbags before eventually landing on heading her own footwear line, Seuil Studios, in 2019. Its heels boast a healthy balance between minimalist and statement: For now, the brand forgoes bright hues in favor of a muted palette. But it’s Ross’ attention to detail, including link-and-sphere-shaped heels and ultra sharp, croc-embossed toe silhouettes, that results in shoe designs that are no less exciting than a pair of neon pumps. “[My heels] are staple pieces that turn heads, but they don’t overpower your wardrobe,” Ross tells NYLON. “They can be worn with just about anything.”

Is disco on its way back? If it is, it will single-handedly be the doing of the newly launched London-based brand D’accori, known for its metallic finish. Brand designer Mo D’accori’s early, student-era work was picked up by none other than Lady Gaga. Similarly, the standout style from its debut release, the Belle sandal, had already found its way on the feet of Doja Cat and Ariana Grande before the brand even officially launched.

“I want to make women feel fabulous and powerful in my shoes,” D’accori tells NYLON, and inarguably, a nearly 6-inch, shimmery platform is bound to do just that. For D’accori, the successful launch is about more than just a return to the dance floor — it’s about representation. “​​I come from a culturally diverse background,” he says. “I chose shoes as my art form of expression with the hope that one day, the future generations would look up to my brand and be able to relate to it in one way or another.”

While there are no firm style rules, one could argue that personality is the key ingredient to going-out heels these days. With Western Affair, the art installation-turned-funky footwear line launched in 2019 by Olivia Pudelko, you’ll have no choice but to head into the night wearing a conversation piece. “[I want my pieces to inspire you] to make bold choices with your outfits and overall in life,” Pudelko tells NYLON.

With that in mind, there’s no such thing as a dull style from the brand. Pudelko plays around with snakeskin-textured mules in a color-block format, reminiscent of Western cowboy boots, all the way through to heels brought to life with puffs of sheepskin fur. And the designer does it all with manageable heel heights, which top off at around 3.5 inches high. “Firstly, the shoe needs to be comfortable and of great quality, so you can have fun even going out in heels,” Pudelko says. “From there I can go crazy and experiment with different materials and techniques, which I love doing.”

Not many places will you find the bold flare of the ’70s, the sheer glam of the roaring ’20s, and the modernity of today all in one place, managing to somehow flow seamlessly. Yet that’s the premise of the newly launched line Larroudé — no occasion left behind, including those late nights. “[We design] with a woman in mind [and her needs] in mind,” designer Marina Larroudé tells NYLON. “Is she going on a date? Is she going on a job interview? If she going dancing? We want to be with her every step of the way, literally.” The industry veteran launched the brand following a pandemic-induced layoff, granting her the opportunity to bring a handful of other untimely unemployed friends on board. If anything, the brand’s now rap sheet of trendy designs are a sign the brand was meant to be — from a chunky, plaid motif platform, to a low-heeled gingham mule, Larroudé is sure to be on every fashion insider’s radar in no time.

TLZ L’Femme has long since captured A-list celebrity fans, from Beyoncé to Billie Eilish, with its standout apparel. As far as designer Aazhia Rhy is concerned, the unexpected is to be expected when it comes to fashion, from full fishnet dresses to puffer skirts. Now, it’s one of the brand’s new trouser styles, which features tube-like piping detail on either side (and has already been worn by Normani) that would inspire the brand’s upcoming release of its first foray into party-ready heels.

“I was playing with the foam tubes we use in our collection and began to lace them around my feet,” Rhy tells NYLON. “I typically play around with my materials to get an idea of what I want to do.” The result is a puffy-strap heel with lace-up ankle wraps the designer already teased with her own namesake collaboration with Missguided in July. Though Rhy hasn’t solidified an official launch date for TLZ L’Femme footwear, fans — and the dance floor — are eagerly waiting.