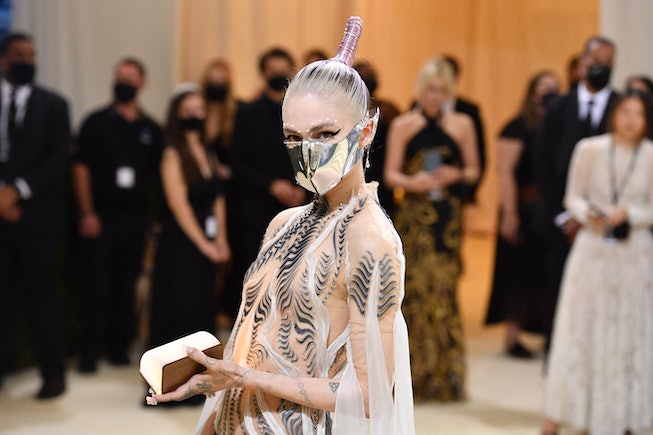 The new images were revealed on Tuesday, April 12, and the Miss Anthropocene songstress is seen traveling through mystic landscapes. Captured with a sword in hand, similar to her 2021 Met Gala ensemble, Grimes transforms into a medieval ice princess, wearing all-white pieces from Dion Lee’s Spring 2022 collection, ranging from fishnet skirts and embellished blouses to lace-up tops and more. The singer paired her campaign look with icy long straight hair, along with piercing red eye makeup, done by the musician herself.

The Australian designer revealed how Grimes inspired his Spring 2022 collection in a recent interview with Vogue. “‘Delete Forever’ became my existential anthem during the lockdown and it feels full-circle to be releasing this campaign in 2022,” said Lee. “I am incredibly inspired by how hands-on Grimes is with everything she creates, from writing and producing her music to directing her video... It was inspiring to see how the sound translated into visual mythology for the album and the parallels between designing and creating a collection for me each season.”

The 34-year-old musician also shared more about her project Book 1 and her personal style, stating, “I love old inaccurate, exaggerated historical texts, so Book 1 is my futurist version of this (see: Herodotus, Icelandic sagas for cool references!) Book 1 inaccurately and dramatically details the burgeoning era of technocracy and trans-humanism from within the corpo court. This sounds pretentious on paper…. Haha, I apologize.”

She also added, “[For my style] I am de-gothing so the aesthetic is mostly white... And like the theme, it’s mostly Medieval futurism.”