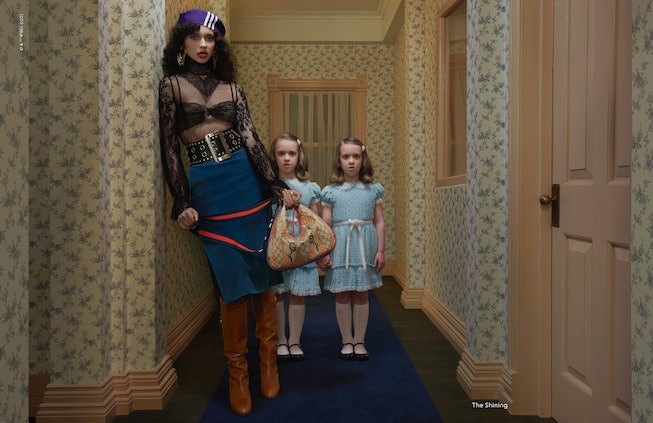 After debuting its Fall 2022 collection at Milan Fashion Week back in February, Gucci has finally dropped its accompanying campaign on Thursday, Aug. 25, titled Exquisite.

Visualized by none other than Gucci’s Alessandro Michele, the photo and video series not only includes key silhouettes from the luxury brand’s latest runway show but also features its surprise collaboration with Adidas, as well. The campaign also pays homage to renowned filmmaker Stanley Kubrick and his most celebrated works over his career.

Lensed and directed by photographic duo Mert Alas and Marcus Piggott, along with art direction by Christopher Simmonds and replicas of original costume designs curated by Milena Canonero and Charlotte Walter, Gucci’s “Exquisite” campaign takes viewers through a cinematic journey into the mind of Michele by replicating Kubrick’s most notable movie scenes, including 2001: A Space Odyssey (1968) and A Clockwork Orange (1971) to Barry Lyndon (1975), The Shining (1980), and Eyes Wide Shut (1999).

In a one-minute fashion film, models are captured channeling the uncanny vignettes dressed in a slew of Gucci’s runway looks for women and men, from fall-ready pleated skirts and suited outfits, to dreamy evening gowns and sporty glam Adidas dresses, just to name a few. The campaign also highlights some of Gucci’s sought-after accessories from the Fall 2022 collection, including spike-studded mini bags, knee-high boots, statement earrings, and more.

“I’ve always been charmed by cinema. For its power to tell stories that can probe human adventure and its drift. For its visionary power to dig up in the real, making it vertiginously imaginative and questionable,” Michele said in an official statement. “If you ask me, a garment is not, and never will be, just a piece of fabric. It’s rather the means through which we are able to unfold who we really decide to be, it’s how we shape our desires and the ultimate sense of our staying. That’s why I’ve always imagined my collections as films able to convey a cinematography of the present: a score of stories, eclectic and dissonant, that can sacralize the human and its metamorphic ability.”

He also adds: “This involvement generates a change of state that is very significant for my job: clothes get closer to bare life again. They turn into highly imaginative functional prosthesis, and they do so to tell a story. A story that shatters, enchants, tortures, ignites. Because it’s the story of the human that dwells in each and every one of us.”

You can now watch Gucci’s “Exquisite” Fall 2022 campaign, along with more of its official images, below.

Replicas of the original costume designs curated by Milena Canonero and Charlotte Walter.