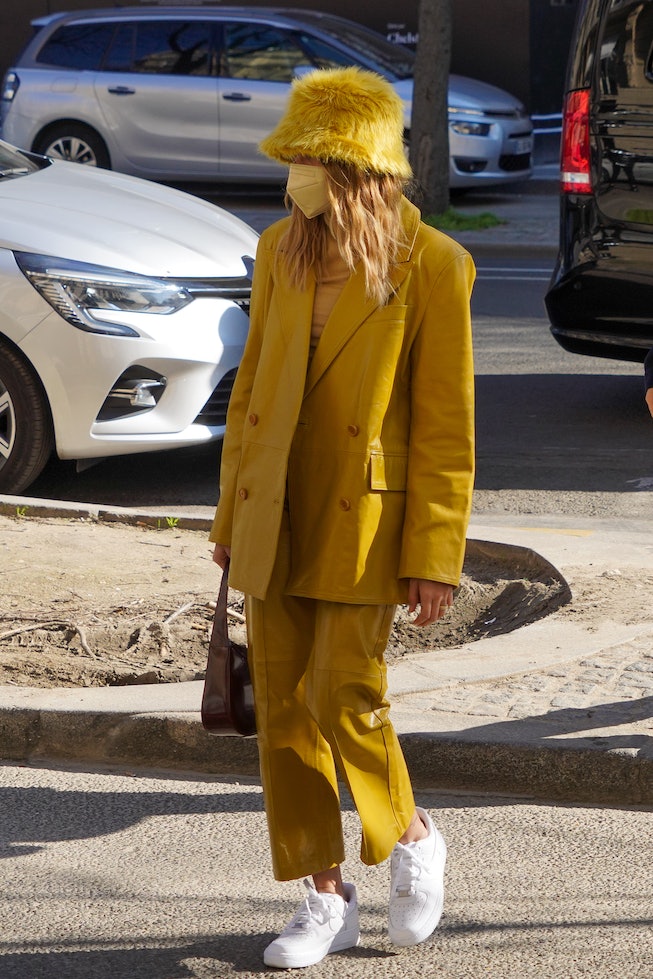 Have you heard? The Biebers are in Paris! Hailey and Justin Bieber stepped out in the city of lights over the weekend, but unfortunately for Mr. Biebs, it was Hailey's yellow look that got all the attention.

Dressing in all-yellow and not fully channeling Big Bird is a lofty task, especially if that look includes a fuzzy yellow bucket hat. Somehow Mrs. Bieber managed to accomplish this, and perhaps even made Big Bird question his own wardrobe upgrades in the process.

Bieber's yellow leather suit and shaggy bucket hat both come from Stand Studio, while her matching yellow sweater is by Petar Petrov. She broke up the yellow with a burgundy By Far bag and white Nike Air Force 1 Shadow sneakers.

"It's the matching monochrome for me," Bieber's stylist Maeve Reilly wrote on Instagram.

Spring is just around the corner, and now Hailey Bieber is making a very strong case for an all-yellow closet.

Ahead, we rounded up our favorite celebrity outfits from the week, including Charli XCX's bike shorts, Teyana Taylor's Fendi logos, Dixie D'Amelio's statement pants, and more.

Millie Bobby Brown doesn't just deliver looks when she's on the red carpet. The actor showed off her at-home style in a leather blazer and flared, zebra-print pants.

Kiernan Shipka, wearing a Moncler puffer, and her dog posed for family photos.

Dixie D'Amelio styled her argyle pants with a black crop top and cardigan.

Taylour Paige wore Prada's latest for a casual walk with her dog.

Elle Fanning channeled a Disney princess in a yellow gown by Bora Aksu while on her virtual press tour.

Storm Reid wore Alaïa for her appearance on The Late Late Show.

Tracee Ellis Ross may or may not have walked off the Black-ish set in a striped Rosie Assoulin look and matching Nike Dunks.