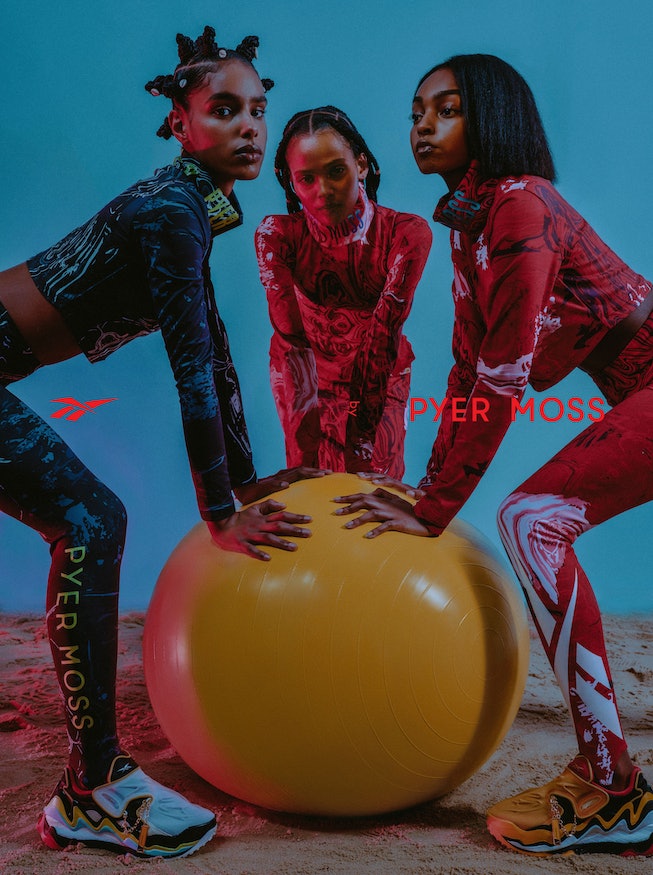 It’s been five years since Pyer Moss and Reebok partnered together and over the years, we were treated to perhaps one of the top fashion-meets-sport collaborations yet. Following the news of Kerby Jean-Raymond’s departure as the global creative director in February and with three sought-after collections under his belt, Pyer Moss is dropping its very last capsule line with the sportswear brand.

The New York-based label is expected to release the Reebok by Pyer Moss Collection 4 at the end of March. Inspired by identity and spirituality, the offerings merge both of the brands’ aesthetics and rich knowledge of athletic footwear and apparel. Though we don’t know much about the upcoming launch just yet, we can expect to see pieces similar to its past releases, like oversized hoodies, chunky sneakers, and comfy athleisure. In a series of newly-released images, the models are seen wearing cropped athleticwear, matching sets, hypebeast-approved sneakers, and more.

While we wait for more updates to come and the capsule line to officially drop in the coming days, see everything you need to know about how to cop Pyer Moss’ fourth and final collection with Reebok, ahead.

When it comes to the apparel line, Reebok by Pyer Moss Collection 4 is inspired by spiritual statues and artifacts, taking on the traditional image of a higher power. Not only that, it also reflects spirituality, channeling the ability to relate to people within our own communities, and healing.

Featuring a mix of men’s, women’s and unisex garments, the upcoming launch will be similar to its past releases when it comes to silhouettes. You can expect to shop the brands’ signature styles, like oversized hoodies ($180), chunky sneakers, and comfy athleisure. Matching printed athleticwear sets will also be released, along with cropped tops and form-fitting leggings ($150). There are also a number of outerwear garments, including windbreakers ($300) and padded coats ($450-$800), and coveted pieces like baggy jumpsuits. Best of all, the two brands are launching yet another line of hypebeast-approved sneakers, known to sell out quickly in the past. Prices for the Pyer Moss & Reebok collection range from tees starting at $80 to a long padded coat for $800.

When and where can I buy Pyer Moss’ final collection with Reebok?

Starting on Saturday, March 26, the Reebok by Pyer Moss Collection 4 will be available for purchase exclusively at PyerMoss.com and at Reebok.com, as well as retailers like Saks Fifth Avenue, SSENSE, and select stores globally.