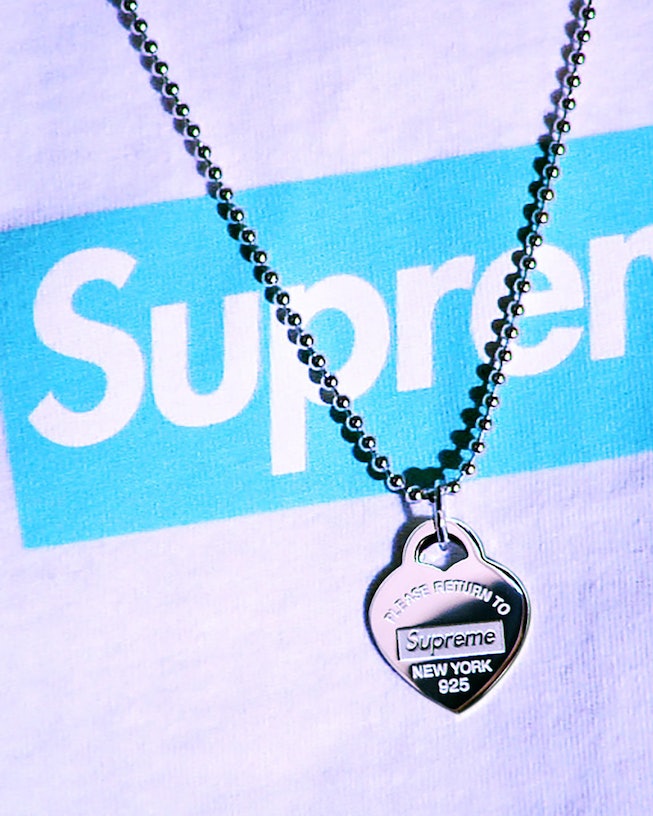 After several months of rumors about a collaboration, Supreme and Tiffany & Co. officially announced that they will be releasing an upcoming jewelry collection for Fall 2021, titled “Return to Tiffany.”

On Saturday, Nov. 6, the skate brand first teased the upcoming launch via Instagram, joining forces with none other than luxury fine jewelry label Tiffany & Co. Taking inspiration from Tiffany’s original designs in the ‘60s, the new collaboration is set to include a range of must-cop items, like Tiffany’s signature heart-shaped pendant, a star-studded bracelet, a key-shaped pocket knife, a pearl necklace with a silver oval tag, and more.

Although Supreme has always been known for its coveted and unexpected collaborations, like partnering with Dreamworks’ Shrek and stepping into the beauty world with Pat McGrath back in 2020, this partnership with Tiffany & Co. still is an exciting foray into high-end jewelry for its male-dominated audience. Most especially during a time when jewelry is rising in popularity among the menswear-obsessed crowd.

The collaboration also solidifies the new direction that Tiffany & Co. has taken since being acquired by LVMH at the beginning of 2021. Its latest campaigns, like “This Is Not Your Mother’s Tiffany,” targeted a wider and younger audience, and the luxury brand has recently added more buzz-worthy celebrity ambassadors to its already star-studded roster, from Beyoncé and Jay-Z to Blackpink’s Rosé and tennis champ Emma Raducanu.

Plus, if there’s anything to learn from past Supreme drops, it’s that this collaboration will likely sell out quickly and show up on the resale market quicker than any high-speed internet connection. So you might want to prepare ahead of time before the collection is officially available (and believe us, Supreme fans do not mess around).

Here’s what to expect from the limited-edition Supreme x Tiffany & Co. collection, and how to cop the sought-after pieces, ahead.

What is the Supreme x Tiffany & Co. collaboration?

Supreme x Tiffany & Co.’s limited-edition Fall 2021 collection, titled “Return to Tiffany,” is set to include an array of jewelry and personal accessories inspired by original Tiffany pieces from the ‘60s, like its well-known heart-shaped charms that were first introduced in 1969.

With prices ranging from $54 through $1,250, the new collaboration features a range of sterling silver items like a heart-shaped tag pendant, a freshwater pearl necklace with an oval tag, a star-studded bracelet, a heart tag stud earrings, a key-shaped pocket knife, and an oval tag key ring. Each item is also engraved with Supreme’s box logo, and the tags are marked with the phrase “Please return to Supreme.”

Not to mention, the capsule collection is also set to release a box logo tee in Tiffany’s signature blue color, as well as include a box logo sticker with each purchase.

When and where can I buy the Supreme x Tiffany and Co. collection?

The Supreme x Tiffany and Co. collaboration will be available to shop in select stores and online starting Thursday, Nov. 11 at Supreme. Tiffany & Co. will release the collection shortly after on Friday, Nov. 12. The select locations in the U.S. include Supreme’s New York and Brooklyn stores, as well as its flagships in San Francisco and Los Angeles. Plus, Tiffany & Co.’s New York Flagship Next Door, along with its locations at South Coast Plaza and in the Miami Design District.