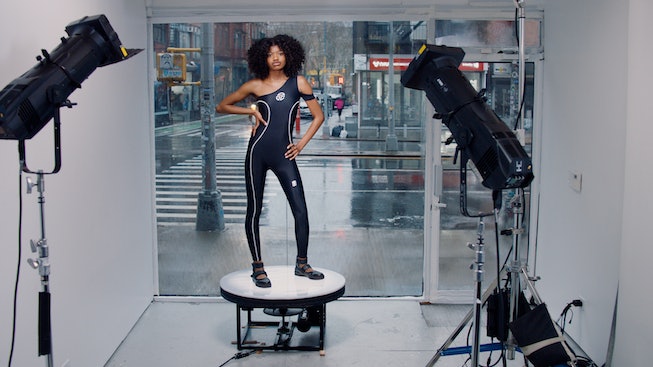 Telfar is back once again with another drop, following the success of its previous collaborations with UGG and Moose Knuckles, among others. After its first foray into athleticwear for the Liberia team at the 2021 Tokyo Olympic Games, the cult-favorite brand is now adding those uniforms to its official core collection for everyone to shop.

Starting on Wednesday, Aug. 17, the New York-based label is officially debuting a series of sporty pieces, titled Telfar Performance. You can expect to find a total of 14 brand new unisex pieces, coming in an array of sleek, skin-tight silhouettes, including leggings, compression tops, bandeaus, off-the-shoulder tanks, and more. There are also biker shorts and one-piece body suits, as well as fitted sleeves for your arms and legs. Clemens has also released his own rendition of athletic hijabs, too, which come with outer stitching and the brand’s signature logo. Sizing for the performance gear ranges from XS through XXL and is priced from $57 to $198.

Clemens’ 2021 Olympic uniforms for Liberia were featured in the teams’ competitions, along with the opening and closing ceremonies, and the players’ time spent in the Olympic Village. The celebrity-approved label also dressed the country’s officials and support staff, totaling about 70 pieces of sports apparel and accessories for the major global sporting event.

The first drop of Telfar Performance is available to shop exclusively on shop.telfar.net on Wednesday, Aug. 17, at 12 p.m. ET, with more expected to be released in the coming months. You can check out more from the collection in its official campaign images, below.

NEXT UP
Fashion
Telfar Thinks You Need An It Wallet To Go With Your It Bag
Entertainment
Mariah Carey, Xtina, Missy Elliott To Play Lovers & Friends Fest 2023
Entertainment
Hawa Has Her D'Angelo Moment In Playful "Actually" Video
Culture
Loewe’s Howl's Moving Castle Collection Is An Anime Dream
Style + Culture, delivered straight to your inbox.