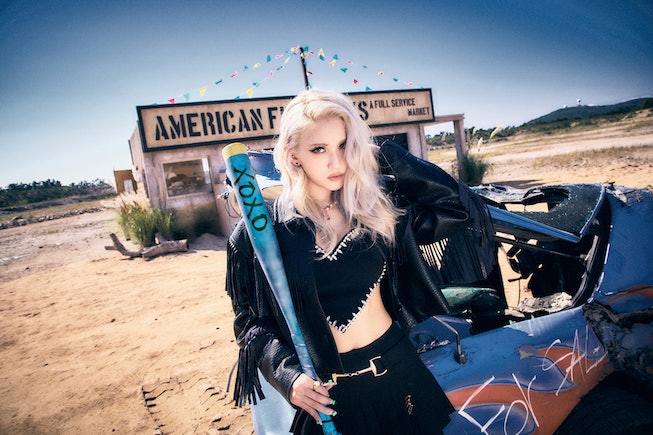 On Friday, Oct. 29, the K-pop star Jeon Somi released her highly-anticipated first full-length album and her latest single, both titled XOXO. The Dutch-Canadian and Korean artist rose to stardom after debuting in the 11-member project group I.O.I, and back in 2019, she released her own mega-hit track “Birthday.” Even before coming out as a solo artist, Somi has garnered millions of fans over the years, and at 20 years old, this is only just the beginning.

The music video for Somi’s new track “XOXO” exudes “high-teen” energy mixed with pop-punk sounds, as the heartbroken singer discovers she’s been cheated on by an ex-lover. She then mischievously embarks on a journey full of revenge and destruction, like trashing the “good boy’s” house, going on a graffiti-covered car chase, and accidentally setting the scene of the crime on fire... or does she?

“XOXO is the goodbye you send to the player who cheated on you, telling him ‘OK, I am done with your B-S. I don’t want your love anymore. This is over and I’m signing off with XOXO — as in, see you never, goodbye.’ It’s hugs and kisses that are a bit more evil than sweet,” Somi tells NYLON about the meaning behind her song.

Ahead, Jeon Somi shares an exclusive fashion diary for NYLON for “XOXO.” Read on as she unpacks the inspiration behind her eight-track debut album, her favorite fashion looks from the music video, and more.

You finally released your new single and debut album XOXO! It’s been so exciting to see your growth as an artist over the years since SIXTEEN and PRODUCE 101. How do you feel now that your album is out? How long have you been prepping for it?

I still kind of can’t believe it’s out! Every day it feels like I’m dreaming, like what, did you just say my album?! But I’ve been getting a lot of feedback from artists, friends, and fans from all over the world complimenting me on the album, so I’m very grateful that everyone is enjoying it as much as I am. The past year, I was in the studio every day because we were recording and re-recording for each track to make it sound more full and rich. Actually, I worked on some of the tracks on the album three years ago, like “Watermelon,” “Birthday,” and “Outta My Head.” So the album is a compilation of all my work up until now, which is nice hearing the evolution of Somi in one project.

What has been your proudest moment so far in your career, or even personally?

The turning point in my life was when I joined THEBLACKLABEL because that’s when I really got to grow as an artist and experiment with different sounds and write songs. The release of XOXO is my proudest moment ever, and probably will be for life! It’s everything I’ve worked on up until now, in the most perfect album form.

What were some of the biggest challenges you faced as a solo artist and while making this album?

I used to feel pressure as a solo artist when I was just starting out, but now, I don’t mind it. Honestly, most of the time when I’m in the songwriting and producing process, I have all our producers at THEBLACKLABEL to go to for questions and support, so it doesn’t feel like I’m alone in this journey as an artist. I do miss the energy of being in a group sometimes but my hair, makeup, style, and management team are always there to give me energy and we have a lot of fun behind the scenes. I just really lucked out with the best team anyone could ask for, [it’s really] a dream team.

What was the fashion inspiration and creative process behind the video?

The inspiration started from the music and the lyrics, and the finishing touches were actually made by me! “XOXO” has a rock bass guitar sound and the vocals have loud chanting parts, so some of the bold punk looks were created from that. The lyrics use ‘XOXO’ as hugs and kisses in a more cynical way, so we made feminine looks with a more bad*ss twist to it. I thought it would be cute to tone down some of the looks from looking too serious, so I added beaded accessories that I made or attached keychains to a simple outfit. Overall, we tried to upgrade the ‘DUMB DUMB’ prom-queen-like Somi with more after-school, rebellious looks and I love how everything turned out.

What is your favorite outfit from the video if you have to choose? Would you say that your style in your music videos is similar to your personal style?

I loved everything but my top three picks would first be the orange fur outfit with beads in my hair, which were added by me. It’s such a bold look with the makeup, too, I loved it. My second pick is the all-white tennis court outfit, which was just iconic with the fur hat. If you look closely, you can see the fun vintage keychain I added to the belt. My third one is the mugshot outfit with the crop top, leather pants, and leopard print jacket. It was so fierce, and nothing like what I’ve worn before.

“You can see the beaded accessories I added to my hair!”Photography by Jun Kyung Lee; Outer: Customed; Top:Vintage; Bottom: Customed; Belt: Alessandra Rich; Necklace: Junya Watanabe; Shoes: Demonia
“Shades of Christina Aguilera from 2000. Do you see the resemblance?”Photography by Ji Yong Yoon; Outer: 10CorsoComo by ERNEST W. BAKER; Top: ASHISH; Bottom: Artifact NYC by Dolce & Gabbana; Belt: Alessandra Rich; Shoes: Demonia
“An all-white tennis outfit with a fur hat? Iconic.”Photography by Jun Kyung Lee; Hat: Customed; Top: Clove; Bottom: Piv'vee; Shoes: Valentino
“Post mugshot in my favorite badass leather pants <3”
“Also, you can see the beaded bracelets I made, and the keychain I added to the belt. It says something about turning 21 that I'll share when I turn 21.”
“The orange fur, the hair, the car, and the desert scene — it was a whole look.”

How has your personal style evolved over the years? How would you define it now in your own words?

My personal style now is a balance between dressing up and being casual. For example, I’ll wear sweatpants with heels, or a fancy top with sneakers. You never know where you might end up, so I like wearing a mix of both high-end and street. Over the years, [the biggest thing] I’ve taken away is that if it’s done right, dressing down sometimes has a greater impact. So I’d say my style is low-key...serving looks? Haha.

Do you have any fun memories or stories from shooting the “XOXO” video?

In the first scene where I’m trashing the house, that’s all me. The big leg kicks, the hockey stick, swinging on the chandelier, none of it was in the script and I just improvised as we shot. Let me just say ‘Wild Somi’ was going 200% and could not be stopped, and the same for the car scenes! We did use a stuntwoman for some of the scenes, but for most of them, I drove myself and I had way too much fun.

Also, the music video was basically like shooting a movie, and on set, I noticed a police car and wondered if we were going to have a [foreign] policeman in the music video. We didn’t have that prepared, so I called up my dad, and he came to the shoot in the policeman outfit, which I don’t know how or where he got that. So cameo dad in the music video was impromptu but I was so glad it came out perfectly edited! (P.S. Thanks, dad, for the support.)

Do you have a favorite lyric that’s stuck in your head?

The rap part actually sums up the meaning of the song and it’s a fun little tongue twister to say so I like that part: Plenty fish up in the sea/ But they don’t swim like me you know it/ Keep on rowin’ if you miss it/ Hugs and kisses, x and o’s for you.

What’s next for Somi?

Season 2 of my reality show I Am Somi is coming. You’ll get to see behind-the-scenes clips of me preparing for XOXO and Somi in real life (aka wild and unstoppable) so stay tuned for that! And once conditions are better, I really wish I could start traveling again and perform in front of fans all around the world. That is on my priority list for sure. Lastly, I noticed how everyone was enjoying my song ‘Anymore’ because it was an all-English track, so that’s something I want to do more of. I will be working on more music and more content for you guys, and this is just the beginning.

“The green feathered boa was actually a Mardi Gras party prop. It fell off so many times while filming, but it was just the perfect finishing touch to the outfit — we had to use it.”Photography by Ji Yong Yoon; Top: Vintage; Bottom: Customed; Belt: Alessandra Rich; Fur: Customed; Shoes: ROC
“This is the outfit you wear when you pick up a cute puppy and blow up a house.”Photography by Jun Kyung Lee; Outer: BOONTHESHOP by CASABLANCA; Top: BOONTHESHOP by PATOU; Bottom: Customed; Necklace: Junya Watanabe; Shoes: Lamoda
“Leaning on the car that I flipped over earlier... and the belt was a nice fancy touch to the grungy, punk rock look.”Photography by Ji Yong Yoon; Top: Vintage; Bottoms: TRIPP; Belt: Customed; Necklace: Junya Watanabe; Shoes: New Rock
“We chopped up my old British Columbia tee from Canada and dressed it up with sequins, leather, and red lipstick.”Photography by Jun Kyung Lee; Top: Vintage; Skirt: PACO RABANNE; Shoes: Valentino
“I don’t get mad, I get evil.”Photography by Jun Kyung Lee; Top: Versace; Bottoms: Vintage Levi's; Shoes: Vetements
NEXT UP
Entertainment
Chloe's "Pray It Away" & 9 Other New Songs Out This Week
Entertainment
Harry Styles Is Performing At The 2023 Grammys
Entertainment
Samia On 'Honey' & Saying The Ugly Part Out Loud
Entertainment
Gracie Abrams & Gia Coppola On The Joy Of Free-Flowing Collaboration
Style + Culture, delivered straight to your inbox.