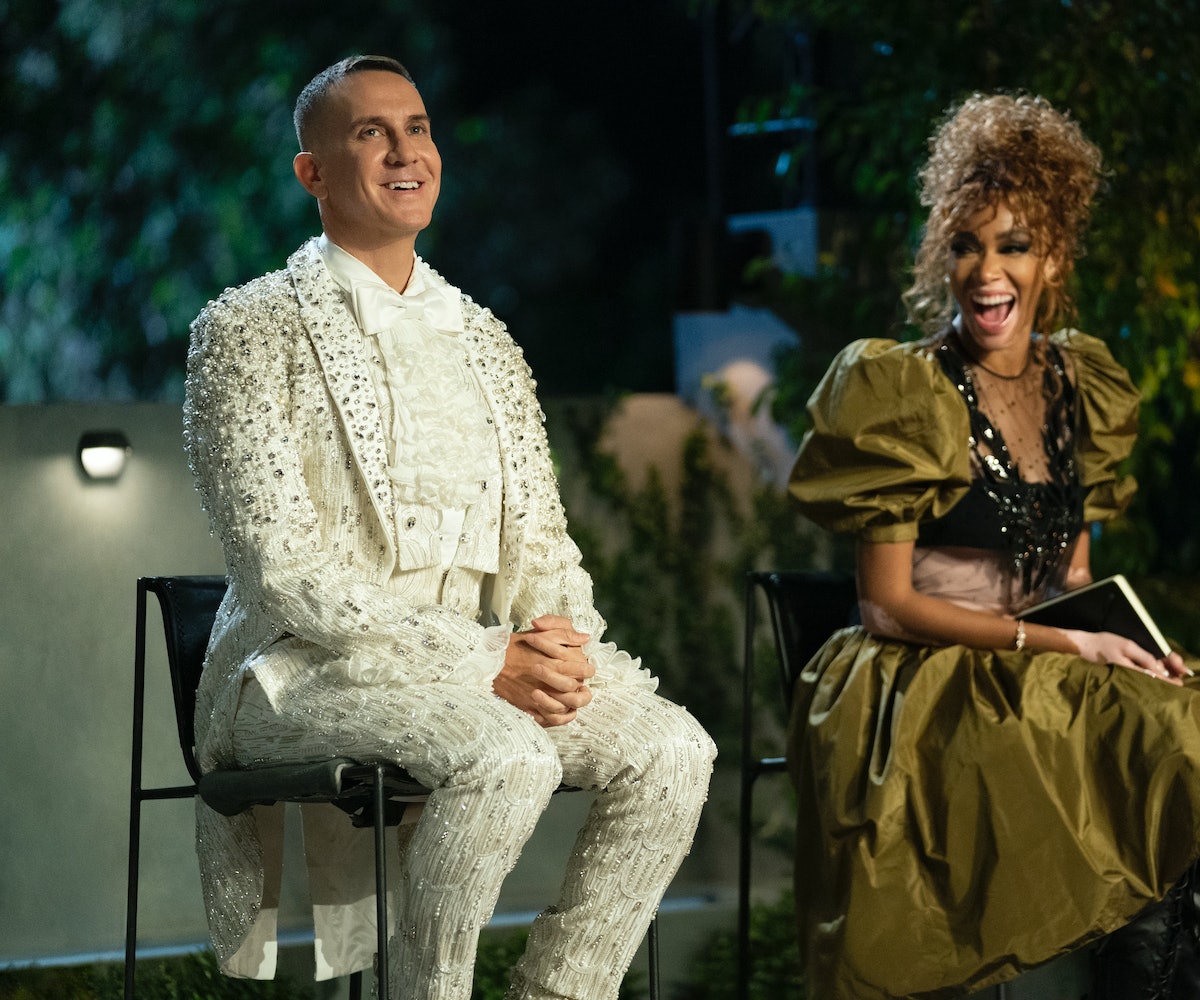 Amazon’s Making the Cut is back for a second season, reuniting TV’s dynamic duo Tim Gunn and Heidi Klum to host a competition among the next wave of emerging fashion designers. While the show’s debut included Naomi Campbell, Nicole Richie, and more to judge its contestants, Making the Cut is now welcoming Jeremy Scott and Winnie Harlow as its official judges, as well as a cast of rotating appearances from designer Prabal Gurung and stylist Shiona Turini.

Scott, who’s based in Los Angeles where the season was filmed, is no stranger to fashion reality shows, having made cameo appearances on both RuPaul’s Drag Race and America’s Next Top Model. But he sees his latest gig as one where he can really apply his decades-worth of industry know-how.

“I’m being able to partake in the whole arc of the season, so that I really am there from start to finish, planting little seeds and watering them and watching them grow,” Scott tells NYLON. “I was really happy to be able to impart the gift of my knowledge and my experience on these designers and, hopefully, to give them the tools not only to win the episode or win the competition, but to be a success in their careers.”

As far as how Scott approaches his new judging role, the designer doesn’t hold back. Though, it did take him some time to realize that honest feedback really is the best way to make the show’s designers better at their work. “At first I was very concerned about crushing people’s dreams, making them sad or hurting their feelings,” says Scott. “And then I just realized the best thing I can do is be honest.”

NYLON spoke with Scott to learn more about how his approach to judging the contestants on Making the Cut, what makes a successful designer today, and his plans for New York Fashion Week and the Met Gala. Read on for more.

What drew you to joining Making the Cut?

I mean, Heidi. Heidi, Heidi, Heidi, Heidi. I’ve had the pleasure of having a friendship with her for the past several years and getting to know her better over the years, and she’s just so much fun. And she’s such a wonderful, warm, hilarious, beautiful woman. When she called and said she wanted me to join for this season, I just said yes. There was really no hesitation because, you know, the thought of being with the gold standard dynamic duo of fashion reality television, of Heidi and Tim, was just a no brainer. I was so pleasantly thrilled to get the news after that, that Winnie was going to join us — one of my friends and muses and someone that’s walked my catwalks and been in my campaigns, so it was great to be with people I love.

How would you describe your judging style for the show?

I really try to give the honest truth. At first I was very concerned about crushing people’s dreams, making them sad or hurting their feelings, and then I just realized the best thing I can do is be honest. They can take from that and learn and improve, and be fueled to do better and to go further and to be able to have the opportunity to see things in a different light. I got over the initial hesitation of not wanting to be a meanie and not seem like a bad guy. And, of course, there’s so many times I got to encourage them along the way in positive ways, too. I really just thought about that as like a cheerleader — and sometimes a tough-love cheerleader.

What do you think makes a successful designer today?

It’s really about creating your own world; have the essence be so clear and tangible that it’s palatable to people. Throughout the season, I kept asking to show us who you are, show us your passion, your passion for fashion. You have to really have your heart ripped out of your chest and put it on your sleeve. Every time as a designer, every time you’re showing a collection, it really has to have a pulse. And that’s what captures people’s imagination and what draws people to you as a designer, in my opinion. It creates that fan base and that want for being part of your world, for wearing your clothes, to spray your perfume on, to everything that encompasses the world that is a designer.

You’ve had your own documentary and a lot of your recent collections have been shown through fashion films. Is the the entertainment industry something that you’re hoping to dive more into in the future?

I’ve always thought of myself and the fashion I do as entertainment. I believe that’s really the kind of point we are now at in pop culture, especially. To me, it just makes sense. Everything is kind of competing for your attention. It’s either social media and Instagram, and streaming devices and actual television, and museum exhibitions and fashion shows, and everything. It’s all just trying to get your attention. There’ so many choices and I just want to be one of the most entertaining of those choices.

New York Fashion Week is coming up. There’s a ton of excitement around its physical return after more than a year, how are you feeling about it?

I’ve had such a phenomenal year and I just launched my third fashion film. It’s been so exciting to watch the reaction to each film and it’s so encouraging and exciting that it’s reaching people and touching them and making them happy. So I love that and I don’t throw that aside, but I do think there is something unique and special about a live show that you just can’t experience. It’s the difference between seeing a movie and going to theater. It’s not one versus the other, it’s just a different feeling. So I missed that feeling and I’m looking forward to it in September.

The Met Gala is going to happen around the same time, too, and you have had plenty of memorable looks from that event. How have been preparing for it?

I’m starting to sketch up all my different looks for the Gala and trying to plan them. I’m starting to do that now because the film has taken a lot of my attention. And now that I’ve gotten through that, that’s my next piece of work — to start all those designs and do something that will, hopefully, wow you and knock your socks off when you see it on the red carpet.

Is there anything else you’re looking forward to this year?