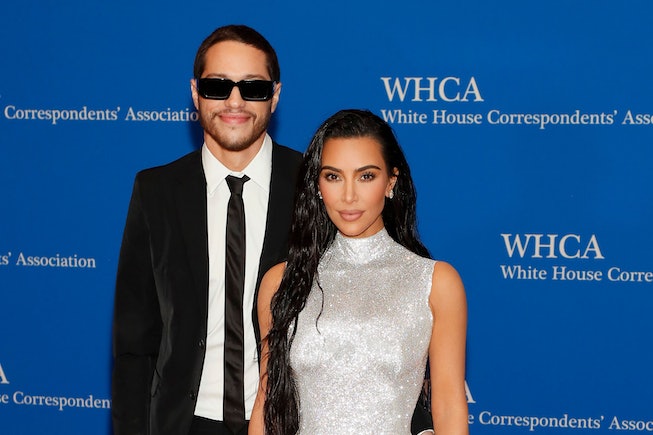 It’s officially official, Kim Kardashian and Pete Davidson are a thing after all and not some figment of our imaginations. Over the weekend on Saturday, April 30, the unlikely couple made their first red carpet appearance together at the 2022 White House Correspondent’s Dinner in Washington D.C.

The SKIMS founder arrived in true Kardashian fashion, opting for a shimmery silver couture gown, custom-made by her go-to brand Balenciaga. Styled by Dani Levi, the turtleneck gown was embellished with fine Swarovski crystal mesh and a short train. As for accessories, she kept it simple by only putting on a pair of diamond earrings and a statement diamond ring (on her pinky, by the way). Seen hand-in-hand, Davidson went for a black Prada suit with a pair of classic Vans sneakers and black sunglasses.

Aside from fans noticing Kardashian’s alleged reverse BBL, it also seems that the pair are a lot closer than we think. In light of their latest appearance together, Davidson was also captured with his beau and her children’s initials (permanently) tattooed on the side of his neck. “White House din din,” Kardashian wrote in a recent Instagram post featuring photos of the two.

Ahead, check out the rest of our favorite celebrity looks from the past week, including Olivia Rodrigo’s going-out dress, Blackpink’s Jisoo in Dior, Kendall Jenner and Hailey Bieber’s matching outfits, and more.

Olivia Rodrigo isn’t letting her world tour tire her out just yet. Ahead of the 2022 Met Gala, she was seen alongside Conan Gray at Carbone in New York City wearing a see-through chainmail mini dress, paired with a contrasting black bralette and high-waisted boy shorts. She then styled her “going-out” look with Giuseppe Zanotti black velvet “Bebe” platforms and a black mini bag with a bow from Self-Portrait.

It was a girls’ night out for Kendall Jenner and Hailey Bieber, as they were seen out-and-about on Saturday in New York. In an off-duty photo, Jenner was captured wearing a vintage Roberto Cavalli fur jacket with a brown corset and 16Arlington’s leather mini skirt, completing her look with black knee-high boots. By her side, Bieber wore patterned halcyon top from KNWLS, styled with brown flared pants, a shearling bomber jacket, and sandals.

Naomi Campbell was seen in attendance at André Leon Talley’s Celebration of Life memorial in New York donning a white belted dress from Schiaparelli with gold embellishments. She also wore an elaborate fur coat styled with a white headpiece, matching colored heels, and a leather handbag.

With the 2022 Met Gala right around the corner, supermodel Paloma Elsesser attended the Vogue Celebrates The Last Friday in April party wearing a shimmery Loewe gown with black sandals.

On Thursday, April 28, actress Tessa Thompson attended an Armani Beauty event in celebration of her as the new global face of the brand. Styled by Wayman and Micah, Thompson was seen channeling a dripped-out mermaid in a stunning Giorgio Armani gown.

Chloë Sevigny and Elle Fanning arrived at the special screening of The Girl From Plainville in Hollywood, with Fanning rocking a multicolored vintage Givenchy haute couture gown sourced from Cherie Balch of Shrimpton Couture, and Sevigny in a tweed look from Chanel.

The pre-Met Gala parties were popping over the past week, as Gigi and Bella Hadid attended the 2022 Prince’s Trust Gala in New York, with Gigi opting to wear an off-the-shoulder hot pink look from Valentino’s Fall 2022 collection. Bella was also captured on the red carpet in a vintage Christian Dior dress sourced by Aralda Vintage, paired along with Chopard jewelry and Christian Louboutin heels.

Rowan Blanchard attended the premiere of her latest film Crush in Hollywood donning a yellow dress with sequined fringe from Rodarte’s Spring 2022 collection and metallic heels.

Actress Kiernan Shipka was spotted outside of Bravo studios in New York City for her appearance on Watch What Happens Live with Andy Cohen wearing Alexandre Vauthier’s black and purple striped one-shoulder mini dress from its Spring 2021 collection and black heels.

On Tuesday, April 26, Lizzo arrived at her go-to spot Craig’s in Los Angeles for dinner, wearing a sheer mini slip dress adorned with pink bejeweled flowers and feathers. She also wore pink pointed pumps from Mach & Mach featuring dazzling crystal bows and a pair of oversized sunglasses with “That B*tch” embossed across the lenses.