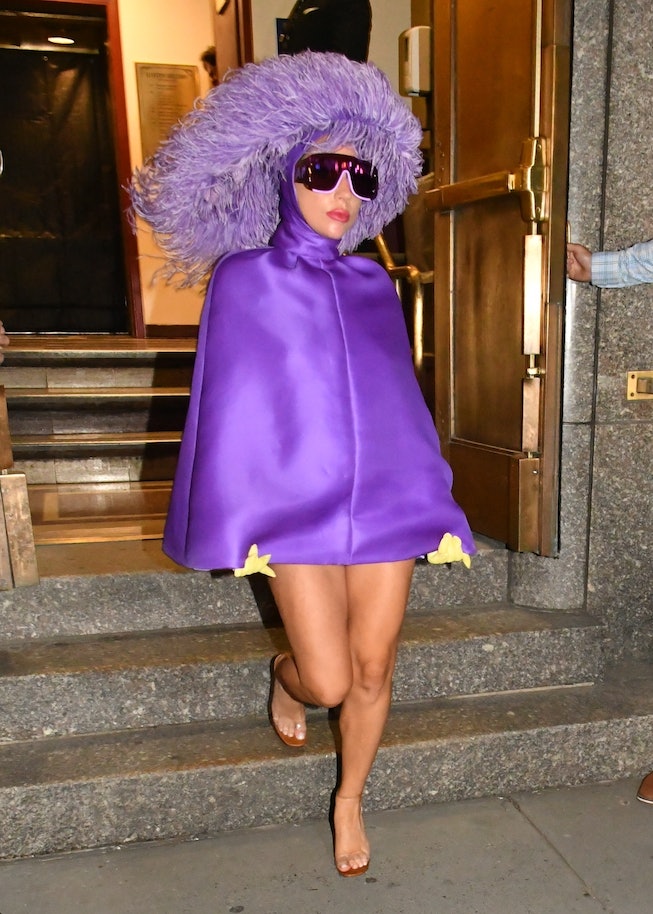 It’s already a big week for Lady Gaga. Aside from the trailer for the highly anticipated film House of Gucci starring the pop star herself, she’s also been making headlines (and jaws drop) with her major fashion looks in New York City. On Saturday, July 31, she was seen wearing an elaborate purple ensemble from Valentino’s Haute Couture collection after rehearsing at Radio City Music Hall for her upcoming concert with Tony Bennett. Just your average, casual post-rehearsal outfit. No big deal.

Gaga’s head-to-toe couture by Valentino’s creative director Pierpaolo Piccioli only made its debut a few weeks ago in Venice, which means that the lavender cape-dress arrived in the Big Apple fresh off the Fall 2021 runway. She paired the look with an ostrich feather hat from Philip Treacy, citron leather gloves, and barely-there heels.

Ahead, check out the rest of our favorite celebrity looks, including Gigi Hadid’s bike shorts, Olivia Rodrigo’s matching set, and more.

Matching sets and midriffs are in this season. Bella Hadid was seen wearing a printed black blouse and skirt combo out in New York City over the weekend. She paired her look with high chunky boots and black sunglasses.

White Lotus (and Euphoria) star Sydney Sweeney stunned in a sheer, ruffled gown by Armani Privé from its Fall 2013 collection at the LuisaViaRoma for Unicef event in Capri, Italy.

Also at the LuisaViaRoma for Unicef event, Katy Perry wore elegant vintage Pierre Cardin dress before switching into a second look for her live performance.

Willow Smith and Tyler Cole stopped by Billie Eilish’s “Happier Than Ever: The Destination” album celebration. Smith wore an asymmetrical orange ensemble underneath a long black coat and platform boots, while Cole coordinated with an all-black ‘fit.

Naomie Harris made it pop at the launch of new restaurant The Ivy Asia in Chelsea, London, in a colorfully printed Farm Rio dress with clear-strapped heels, a yellow clutch, and a gold chain.

Kitty Ca$h attended The Cut’s “How I Get It Done” dinner in Los Angeles in a criss-cross dress from KNWLS with strappy black heels.

Teyana Taylor traveled back to the ‘90s for the upcoming film A Thousand and One. The star was spotted wearing a cropped red tank and baggy jeans loosely tucked into a pair of Timberlands. She finished the look with large gold hoops and gold chains.

Jennie Kim of Blackpink and Grimes is a duo we never knew we needed until now. Jennie wore Maisie Wilen’s Muscle Beach Tank, which happens to be on sale right now, while visiting SpaceX for its rocket launch with Grimes on July 25.