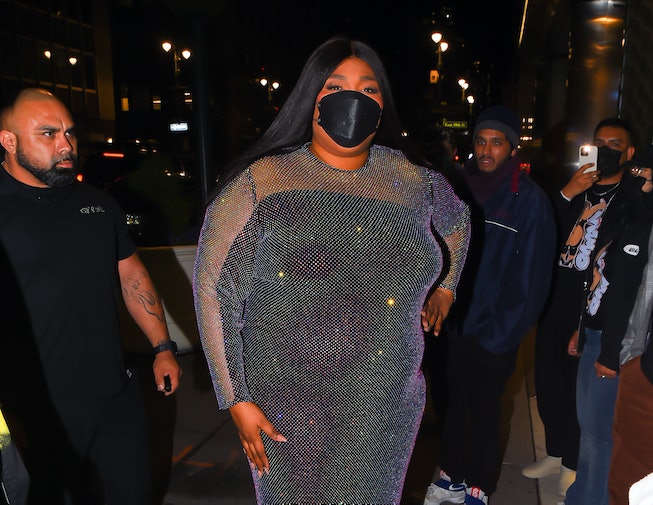 A lot has happened over the past weekend. For the first time in two years, Coachella made its anticipated return, and on the opposite coast, beloved multi-hyphenate singer and style icon Lizzo made her host-and-performer appearance on Saturday Night Live.

Since her last cameo as a musical guest back in 2019, the Watch Out for the Big Grrrls star and Yitty founder returned to the SNL stage and made her opening remarks in a bright blue dress that she accessorized with a matching fringe jacket. She joked to the in-studio audience, “My name is Lizzo and, yes, I’m shocked I have clothes on, too,” referencing her recently captured off-duty look.

After a series of hilarious spoofs and sketches, the music star then took to the stage to perform her newly released single, “About Damn Time,” plus a follow-up with her unreleased track “Special,” expected to drop along with her new album of the same title on July 15. Lizzo was seen front and center rocking a dazzling neon yellow set, including a crystal-covered Yitty catsuit with a matching corset top. Her second outfit also featured a corset top in hot pink, layered over a mini dress and with a billowy, floor-length cape.

Not only were her SNL looks quite the head-turner, but later that night, the 35-year-old singer was spotted heading to the show’s after party donning another crystal-embellished number: a sparkling mesh gown and glittery silver pumps. Her late-night outfit was, without a doubt, “good as hell.”

Ahead, check out the rest of our favorite celebrity looks from the past week, including Janelle Monáe’s futuristic ‘fit, Olivia Rodrigo’s pink mini dress, Zazie Beets in Valentino, and more.

While heading to CBS Mornings to promote her new book The Memory Librarian: And Other Stories of Dirty Computer, Janelle Monáe stepped out in New York City on Monday morning wearing a custom Dead Lotus Couture outfit inspired by Seshet, the lead character from the Memory Librarian short story. She wore a white mini dress with a large black-and-white coat, paired with fishnet stockings, black platform heels, and a mini handbag.

During the official launch of r.e.m.beauty in Ulta retail stores, Ariana Grande looked pretty in pink in a Barbie-inspired mini dress from Valentino’s Fall 2022 collection, paired with the brand’s matching hot pink stockings and its platform Garavani Tan-Go shoes.

Making her return to Broadway in the hit musical Chicago, the 54-year-old actress Pamela Anderson was out in New York City in a plunging black gown, finishing her look off with pointed black heels and a pair of sunglasses.

Beloved style darling Bella Hadid was out and about in New York City this past week in a white tee and chocolate leather pants. With notebooks in hand, she dressed her outfit with a brown vest and platform snakeskin loafers, along with a tan leather bag, a chunky gold belt, and mini sunglasses.

Olivia Rodrigo’s Sour tour is officially underway and her on-stage outfits are not to be missed. During her performance in Denver last week, the 19-year-old pop star was seen wearing a pink tiered mini dress from Betsey Johnson’s Spring 2008 collection. Styled by her go-to wardrobe duo Chloe and Chenelle Delgadillo, Rodrigo completed her look with fishnet gloves and stockings, plus knee-high combat boots from Dr. Martens.

Emma Chamberlain attended the launch of her collaboration with Cava in Culver City wearing an electric yellow sweater styled with black pants, platform shoes, and a leather mini bag.