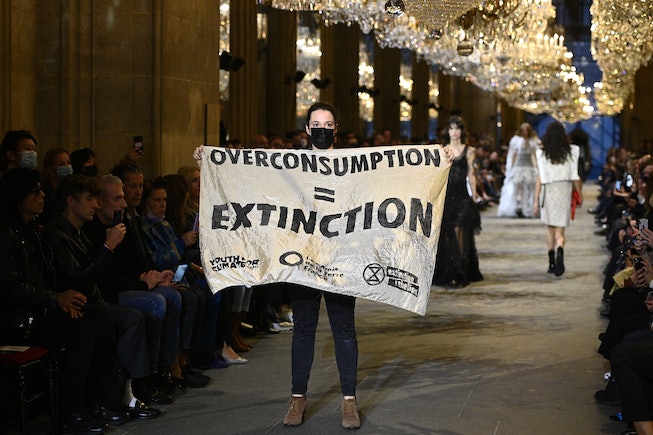 Editor’s Note: This post has been updated from its original version to include comments from Louis Vuitton and the activist groups involved.

Along with Testa’s video, she wrote, “protester disrupting tonight’s Louis Vuitton show.” The 40-second clip shows the person storming down the runway, stopping in front of the photography pit, and then being (quite roughly) removed off the premises by show security. The dark music playing in the background eerily matched the unexpected situation.

In a recent tweet from Extinction Rebellion France, the group urges viewers and French President Emmanuel Macron to #ActNow, writing, “It is urgent to ACT to reduce our carbon emissions! The fashion industry accounts for up to 8.5% of global greenhouse gas emissions. Now the @Gouvernement had opportunities to adopt ambitious regulations on this sector...but did nothing.”

"[President] Emmanuel Macron is very good at organizing big climates summits, but in reality, he is serving the interests of big French companies, especially LVMH,” a spokesperson from Extinction Rebellion told NYLON in an official statement. “We are not fooled and we demand strong and rapid actions!"

“The world’s largest luxury group set trends, bludgeons the public space with advertising, and inspires a desire of overconsumption in the entire population, including those who can’t afford such products,” added a Youth For Climate France spokesperson in an official statement for NYLON.

“2.88 billion tons of clothes, or 42 tons per capita, were sold in France last year,” Alma Dufour, Consumer Campaign Manager from the Les Amis de la Terre France (Friends of the Earth France), told NYLON. “This overproduction is incompatible with global limits. Year after year, fashion produces more and more. If it doesn’t reduce quickly, greenhouse gas emissions will continue to rise in the coming years!”

Noé Gauchard, a representative of Youth for Climate France, also added, “LVMH, the biggest luxury group of the world destroys the planet, defines what is trending, sinks us with advertisements, and inspires overconsumption all across the population, even people than can’t buy it. We had to denounce it.” Louis Vuitton declined our request for comment on the protest.

During Paris Fashion Week in September 2020, Dior experienced its own runway crasher for its Spring 2021 show. Vogue Arabia’s Features Director Caterina Minthe posted a video on Instagram of the protestor, captioning, “Fabulous #Dior show today ending with a ‘We are all fashion victims’ Gatecrasher. No one blinked an eye.” The video shows a woman holding a sign that read “We Are All Fashion Victims.” If there isn’t at least one protest happening at fashion week, is it even fashion week?

See the protestor at the Louis Vuitton Spring 2022 runway show, below.

This article was originally published on Oct. 5, 2021