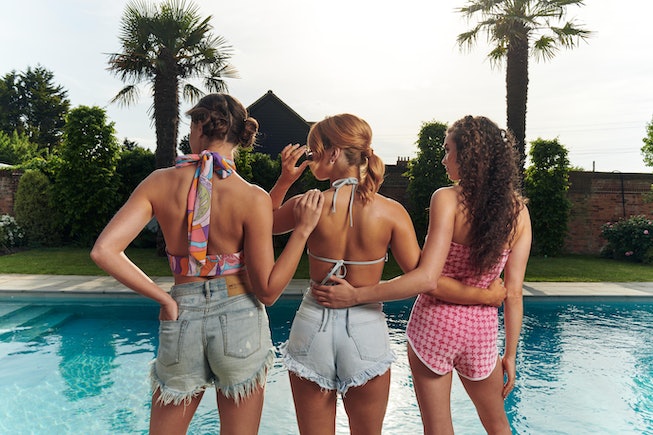 In a major switch-up from previous fashion partnerships, Love Island, the British favorite dating-meets-reality show, is teaming up with eBay. The online marketplace will provide this summer’s cast with secondhand clothing, as well as the opportunity to share a wardrobe of outfits in their shared villa.

“We can’t wait to change the conversation and dress the Islanders in pre-loved outfits for the very first time,” said Jemma Tadd, Head of Fashion at eBay UK, in an official statement.

The outfits you see on Love Island are heavily influential when it comes to shopping, to say the least. According to eBay, Millie, 2021’s winner (and certified “hero” in NYLON’s own ranking of past contestants), wore a one-shoulder marble dress that caused a jump in searches for a similar item by a whopping 127%, as well as 114% more searches for “hot pink co-ord” after she wore a linen version on the show.

The cast’s clothes have sparked such high numbers in sales that some members have snagged big brand deals, mostly among fast fashion brands. In 2021, Molly-Mae Hague, who appeared on the fifth season of Love Island, was named creative director of PRETTYLITTLETHING, while earlier in 2019, Maura Higgins and India Reynolds, also from the fifth season, were named brand ambassadors of Boohoo. (Both brands are owned by Boohoo Group.) With fast fashion’s constant criticism surrounding its sustainable and ethical work practices, it’s a big deal (and a smart move) that the folks behind Love Island are looking to change the sartorial narrative of its highly-watched cast.

“We are thrilled to be pairing up with eBay this year as our pre-loved fashion partner. As a show we strive to be a more eco-friendly production with more focus on ways in which we can visibly show this on screen,” said Mike Spencer, Executive Producer of Love Island, in an official statement. “This partnership will see our Islanders get to dive into the shared wardrobes and help themselves to some incredible pre-loved clothes sourced from eBay. We aim to inspire our demographic and show that there are incredible finds to be had and how sharing is, in some small way, caring.”

The eighth season of Love Island will premiere on ITV2 in the UK in June.