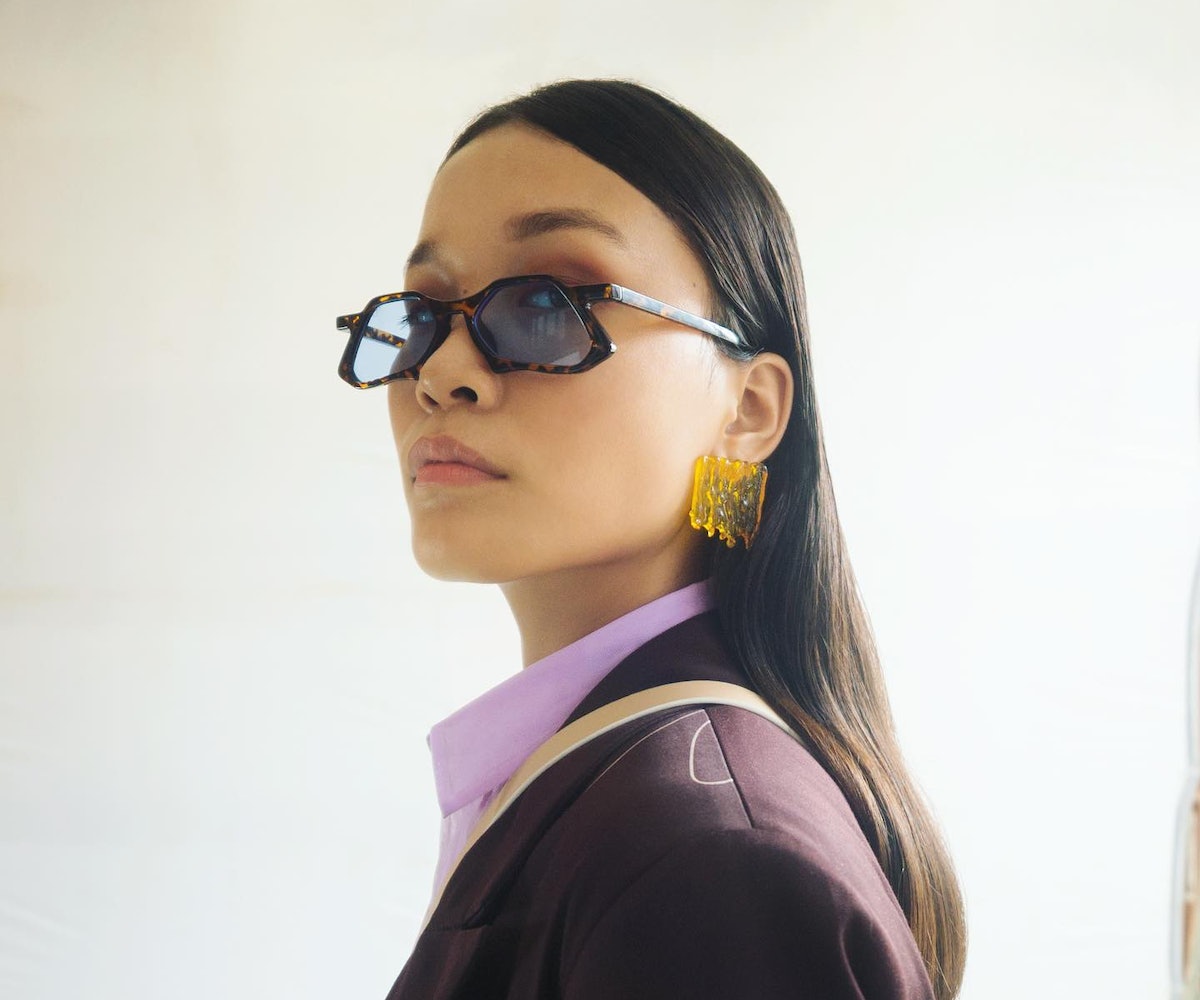 And just like that, New York Fashion Week is here again. After its very first IRL shows back in September 2021, the week-long event returns for the Fall 2022 season from Friday, Feb. 11 through Wednesday, Feb. 16. Taking on a hybrid format of both in-person and digital showcases like last year, NYFW is expected to bring some of our favorite household names and a slew of brand new labels onto our radar.

While some familiar emerging brands, including Saint Sintra, Melke, Tanner Fletcher, and Bronx and Banco have made it on the official fashion week schedule after hosting shows on their own, we’re still expecting a handful (and more) of buzz-worthy names who are just getting their start in New York. From a Los Angeles-based streetwear label and up-and-coming knitwear brands to Hood by Air’s Shayne Oliver and his luxury brand debut, get to know the 13 designers making their New York Fashion Week debut for the Fall 2022 season, below.

Parsons grad and Houston native Bach Mai, who boasts design stints at Oscar de la Renta and Maison Margiela under John Galliano, is bound to have his designs grace the red carpet for awards seasons to come. (He’s already dressed Tessa Thompson, Venus Williams, and Kate Beckinsale, among others.) The designer will bring some much-needed couture to New York Fashion Week as he debuts his latest collection. “America has a huge couture market,” Mai told WWD. “There is a lot of talk about Asia and the Middle East but why are there not more U.S. designers who understand couture? Not just the fantasy side, but the women who wear it in their lives.”

Created by twins Bruce and Glen Proctor, who got their start designing for brands like Sean John and American Rag, BruceGlen is a unisex fashion label known for its vibrant apparel and accessories that unlock the child within us all. The duo use colorful fabrics and exciting prints on a range of styles, from slip dresses to sweatsuits and their own handbag designs. For BruceGlen’s Fall 2022 collection, the brothers are dedicating it to their late mother, titled “Look Mom...”, which spotlights her strength and high-spirited persona, along with takes on a ‘70s disco-inspired pieces. “She gave up everything so we could have the lives we do,” the Proctors told WWD. “The looks are a statement of her strength, boldness, and fun.”

The Los Angeles-based label Castles & Queens is taking on the streetwear scene. Founded in 2020 by Josh J. Holm, the designer takes inspiration from both L.A. and his upbringing in South Korea. Though the brand is just getting into its fourth collection for New York Fashion Week, it has already established its visual identity leaning towards more refined casual pieces that have that West Coast feel, like embroidered sets and baggy silhouettes to slip dresses and trucker hats. “When you come across our brand I hope it inspires you,” Holm told Shoutout LA in 2021. “I hope you envision a future where you rule as the Kings and Queens you are.”

K-pop fashion label Greedilous may already be a hit in South Korea, but it’s just making its presence known in the U.S. For the first time ever, designer YounHee Park will present a capsule collection in collaboration with LG’s Artificial Intelligence research, which goes by the name of Tilda.

Interior was established in 2020 by Jack Miner and Lily Miesmer, who first met back in an eighth-grade math class, according to Vogue. The brand name is a play on the word and concept: While clothes are meant to be worn on one’s exterior, the brand’s name references the “inner emotional landscape, or our interiority” that we all possess. Since its inception a couple of years back, the childhood friends have already garnered attention from many for their whimsical approach to daily dressing, including intricate silhouettes ranging from asymmetrical cuts to quilted pieces and so much more. “The Interior woman is someone who is into fashion, but I think we have a little something for everybody,” Miesmer told Vogue. “[The puffer and the knits] make it accessible for someone who wants to build a really clever, clean, beautiful wardrobe.”

First conceived in 2018 by founder and creative director Conley Averett, the New York-based label Judy Turner has introduced pieces like ultra-soft pullovers and coveted chunky sweaters that are somehow so simple yet intricate at the same time. Averett’s designs originally started off catering to menswear but has since evolved into a unisex space, now scaling from comfy oversized garments to more fitted and feminine silhouettes.

Started by designer Zhexin (July) Li in 2020, the fashion label July Li is all about reimagining the knitwear space. Li’s designs are inspired by the very essence of nature, taking the everyday feels and emotions from life to create innovative, lightweight knits. You can expect to see anything from see-through crop tops and flowy skirts to ‘70s-style flares and more.

June79 is a luxury fashion house founded by Shawn Pean, who was a former Saks Fifth Avenue senior buyer for men’s footwear in the 2000s. The name of Pean’s label first came about after the passing of his brother, he told WWD. “The name June79 has lived in my head for a long time, my brother passed away years back,” said Pean. “He always wanted me to start a clothing line. His name was June, and June 1979 is the month and year I was born.” By using a wide range of uniquely-tailored fabrics, the label is reimagining the menswear space, creating easy-to-wear pieces with European sophistication and a Brooklyn feel.

KGL, or Kanika Goyal Label, is perhaps one of the most sought-after brands this season. After studying at the National Institute of Fashion Technology in New Delhi and Parsons in New York, Goyal honed in on her playful twist on oversized pieces with boxy shirt-dresses and patterned silhouettes as her designer trademark.

In an interview with Forbes India back in 2019, Goyal describes her aesthetic as “provocative minimalism,” using maximum patterns that’s still appealing to the most simple dresser. “It’s basically getting calm and chaos together,” she said. “Using both heavy and light fabrics, and contrasting prints, to give depth and perspective. Opposite elements always lend themselves to a dramatic, yet harmonious appeal.”

Since KGL launched, Goyal has already collaborated with brands like Adidas Originals and SmartWater, and dressed many global superstars, like MIA, Priyanka Chopra, and Lilly Singh, to name a few.

Designer Shayne Oliver is no stranger to New York Fashion Week, after showing for several years with his cult favorite label Hood by Air. Now, he’s debuting his own high-concept luxury namesake brand as part of a three-day event of art, fashion, and music, titled Headless and hosted by his art collective Anonymous Club.

Chicago-based fashion brand Tanisi is making its way to New York Fashion Week, debuting its very first collection for Fall 2022. Started by the mother-and-daughter duo Shreya and Axi Patel in 2020, the artisan-focused label makes sustainable and high-quality pieces that are timelessly elegant and accessible, as well. Taking cues from their Indian heritage, Tanisi features a range of elaborate dresses and must-have eveningwear that is destined to be apart of your “going-out” wardrobe.

After nearly 16 years in the knitwear industry, Henry Zankov launched his namesake label called Zankov in 2020 and will be hosting its first-ever presentation at NYFW. The genderless fashion brand heavily focuses on color and quality. “I always love mixing: a bright color with saturation that almost feels synthetic, mixed with natural materials such as cashmere, wool, merino, alpaca,” the designer said to WWD. While the brand has become known for its knitted pieces, from oversized checkerboard-print sweaters and comfy striped bottoms, Zankov is already expanding his skills outside of knitwear, like creating pillows and suited looks.