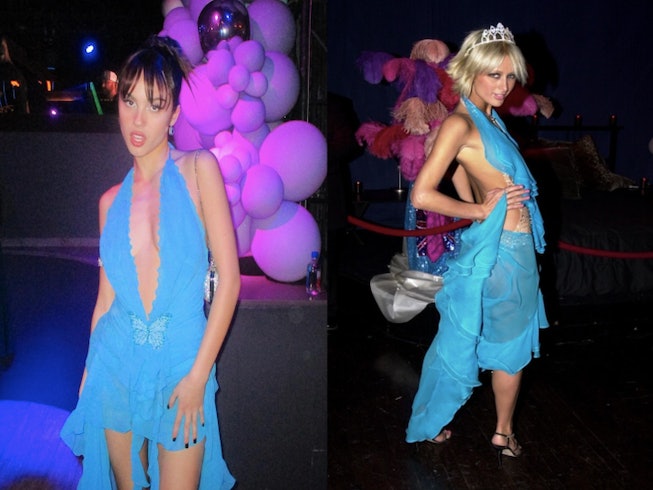 “Deja Vu” is real, after all. After taking home three trophies at the 2022 Grammys this past Sunday, including awards for Best New Artist, Best Pop Vocal Album for Sour, and Best Pop Solo Performance of the Year for her hit song “Drivers License,” the singer celebrated her wins that night in Y2K style.

The 19-year-old pop star took to Instagram to post about her night out, where she was seen hosting her own “baby’s first Grammys” after party. At the celebrity-filled event was none other than 2000s-era icon Paris Hilton, who also DJed for the evening. It was reported that Rodrigo, was not able to attend some Grammys-adjacent events in Las Vegas due to being under 21, including Spotify’s New Artist Showcase.

But that didn’t seem to bother the award-winning singer as she made up for it with her very own celebratory bash. In a series of photos from Rodrigo, she spent time in the DJ booth with Hilton, who wore a green, crystal-embellished mini dress by Dundas. By her side, Rodrigo opted for a blue dress from Blumarine, custom-made by creative director Nicola Brognano and styled by sisters Chloe and Chenelle Delgadillo. The dress also came with a plunging neckline, ruffled high-low skirt, and a rhinestone butterfly charm adorned at the center. Though the Grammys winner may have been born nearly halfway through the early aughts in 2003, the “good 4 u” singer continues to show her love for the noughties’ fashion trends, as her post-awards show gown heavily resembled a dress Hilton wore herself during her birthday party back in 2002.

Olivia Rodrigo at her 2022 Grammys after party.Instagram/@oliviarodrigo
Paris Hilton at her birthday party in 2002.J. Vespa/WireImage/Getty Images

Other parts of Rodrigo’s 2022 Grammys after party included a Sour prom-inspired banner behind the DJ booth, which was projected onto the wall and decorated with kitschy stickers. Hilton was also captured on video serenading and singing along with Rodrigo to her 2006 hit track, “Stars Are Blind,” with other famous friends in attendance, including photographer Petra Collins, actress Iris Apatow, and more.

“hop out at the afterpartyyyyyy ily @parishilton,” the pop singer wrote on her Instagram post, with Hilton commenting underneath, “So proud of you beautiful. Best time celebrating with you last night!!” The Simple Life star also shared photos from the night on her own account, including the caption, “Keepin’ it #Iconic 💯🎶👸🏼👸🏻🎶 So much fun DJing and dancing with you, sis! 🥰 @OliviaRodrigo #IconsOnly 💫✨👑👑✨💫.”

In case you’re having some post-Grammys FOMO, check out more from Olivia Rodrigo’s “baby’s first Grammys” party, below.