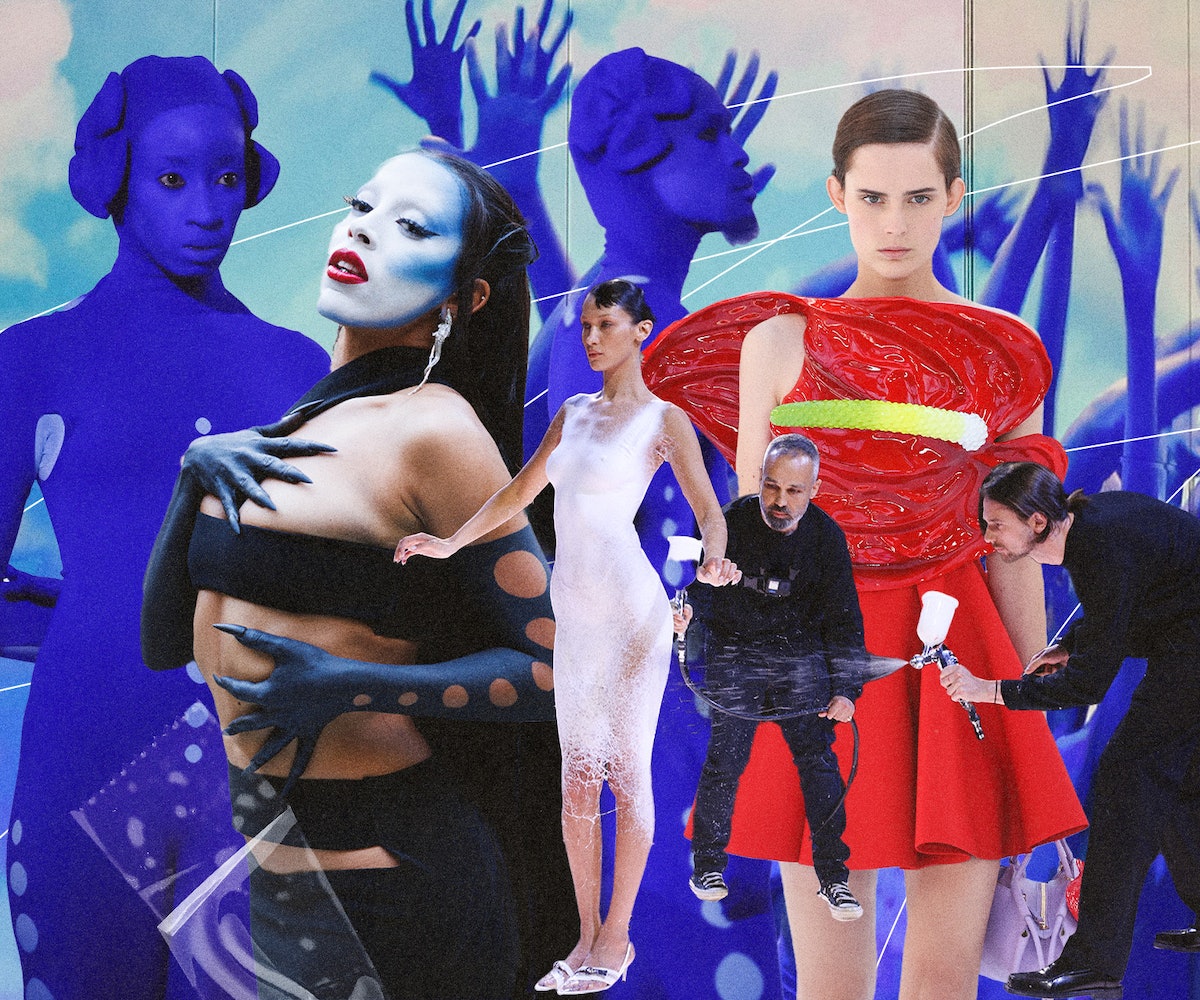 Fashion month’s grand finale, Paris Fashion Week, came to a close on Tuesday evening. It may not have been the most groundbreaking season on the runway front — as trends from recent seasons, like Y2K nostalgia and barely there miniskirts or bras worn in place of shirts, still permeated several collections — and was still lacking as far as inclusion on the runway was concerned. That said, there were many things to get excited about, whether you were on the ground in the city of light or watching livestreams and TikToks from the comfort of your own couch: showgoers taking big style swings (ahem, Doja Cat), K-Pop royalty in some of the biggest front rows, celebrity runway cameos, and much more.

Ahead the 13 buzziest moments from Paris Fashion Week. Til next time!

“Thank you for this. Without you, Paris would have had little to no representation.” That’s what one of the comments on designer Ester Manas’ Instagram debuting her new collection Sunset Body read. The stunning collection, created to counter to the problematic concept of the “summer body,” featured not just an inclusive moment or two but an entire roster of diverse models, strutting the runway in the comfortable yet sexy designs. More of this, please. —JF

So many celebs on the runway

Celebs made cameos both on and off the runways this season, making for a few fun, surprising moments. FKA Twigs in a micro mini and, er, flip flop boots and Ethel Cain in a sequined look sent Twitter into a frenzy at the Miu Miu show. Later the same day, HoYeon Jung opened Louis Vuitton wearing some seriously massive zippers. While no one worked harder than Bella Hadid this week, it was nice to see a few other familiar faces, too. — JF

After a big runway moment courtesy of K-Pop star Jeno in New York, the streets of Paris could have been mistaken for a Blackpink concert. Rosé attended Saint Laurent in a black minidress, Jisoo paired a black mini with fishnets at Dior and Jennie Kim looked absolutely delightful in a colorful, knit look at Chanel. It was almost enough to hold us over until their tour. Almost. —JF

Putting on a fashion show takes a lot of blood, sweat and, in Balenciaga’s case, dirt. A star-studded front row and an entire roster of face-pierced models trekked through literal mud brought in by creative director Demna, smushed on the walls and scattered on the runway. It was certainly a spectacle, albeit a stressful looking one. We’re just hoping Alexa Demie and her sequined, long-sleeved gown came out unscathed. —JF

If it’s Paris, we’re going to get at least a Kardashian/Jenner sighting or two. This season, Kylie said how about 10? The reality star popped up in multiple front rows and events this Week. Most notably, she went a bit bolder than we’re used to seeing from the mostly monochrome-loving family. It was nice to see her having some fun with her fashion. —JF

If you’re only going to make one appearance at Paris Fashion Week, do it like Zendaya. The Euphoria star and Valentino darling took the front row by storm in a see-through bodysuit imprinted with the fashion house’s logo in crystal all over it, a matching blazer and pumps. As usual, she does not miss. —JF

Balmain Creative Director Olivier Rousteing pulled out all of the stops for this season’s Balmain festival — a show that contained 98 ready-to-wear looks, a section of 15 couture looks, and a special runway turn by none other than Cher. While it’s not an easy task to convince fashion’s top editors to embark on a nearly hour-long trek from the city center during the busiest week of the year for a single event, Rousteing did his best to make sure the trip was well worthwhile. —AV

Bella Hadid getting sprayed into a Coperni dress

In a runway moment that recalled the iconic Alexander McQueen Spring/Summer 1999 show, in which Shalom Harlow’s white dress was live-painted on the runway by two robots as she stood on a revolving platform, Coperni designers Sébastien Meyer and Arnaud Vaillant sprayed a dress onto Bella Hadid before the audience’s eyes. It was a moment very clearly engineered to go viral, but in that respect, it was a massive success: The brand gained hundreds of thousands of Instagram followers in the days after the show, and a post depicting the moment garnered over 2 million likes in just 48 hours. —AV

Internet-favorite brand (and top purveyor of on-trend corsets) Miaou held its first proper runway show at the futuristic Espace Niemeyer this season, and it was a sight to behold. With models twisting down the runway illuminated only by a single spotlight wielded by cameramen, it marked an impressive transition from online to IRL. —AV

Having fun with fashion has long been a pop-star prerequisite, but few players in the music industry are doing it as well as Doja Cat is right now. The artist was a front row fixture all month long, often putting the collections on the runways to shame. As soon as she showed up at Lanvin, Thom Browne, Monot, Givenchy, A.W.A.K.E Mode, and more, all eyes (and cameras) were on her — and rightfully so. —AV

This season marked Ib Kamara’s first as the art and image director at Off-White in the wake of founder Virgil Abloh’s passing, and the show — complete with a live musical performance and a dance troupe — was a beautiful celebration of the visionary creative’s life, work, and what will come next from those entrusted with his legacy. —AV

If there’s one collection that we’ll surely see on red carpets, in influencer Instagram photos, and in glossy fashion editorials for the next six months and beyond, it’s J.W. Anderson’s latest outing for Loewe, which was in large part an ode to the beauty of the anthurium flower. Of course, the first celebrity to wear a look from the show was Zendaya, who premiered a white dress before it even hit the catwalk. These days, there are few sartorial co-signs as significant as that. —AV

Whether in Paris or New York, Thom Browne’s runway spectacles are nothing short of magic. From the fantastical clothing concepts, the surreal sets, and the always-emotional soundtracks, Browne’s shows are multi-sensory experiences that never fail to inspire. This time around, Michaela Jaé Rodriguez shut down the runway by climbing into a pink Cadillac as Aretha Franklin song of the same name blasted from the speakers. Who doesn’t love a feel-good fashion moment? —AV

NEXT UP
Culture
An Exhaustive Breakdown Of The Balenciaga Controversy
Culture
Lindsay Lohan’s New Style Era Is Sweet Redemption
Culture
Mowalola Teams Up With Bratz For A Daring, High Fashion Collection
Fashion
Reformation & Canada Goose Team Up To Warm You Up