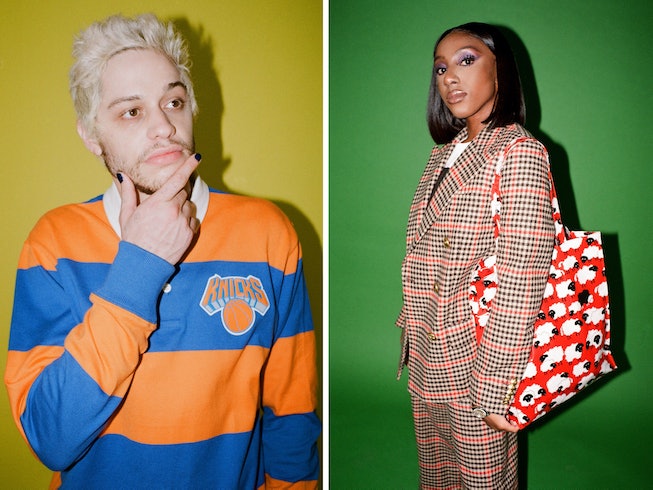 Rowing Blazers, the New York-based preppy streetwear brand, just launched its latest Fall 2021 collection, with the accompanying campaign starring none other than comedians Pete Davidson and Ziwe. (This marks Davidson’s second fashion gig this year, as he recently starred in a campaign alongside models Emily Ratajkowski and Adwoa Aboah for Moose Knuckles.)

“Pete and Ziwe are just the perfect poster kids for this collection, which is all about being thoughtful, smart, aware, and working hard, but not taking yourself too seriously and having a great sense of humor and of fun,” founder Jack Carlson exclusively told NYLON.

The duo star in a series of side-by-side images, sporting the brand’s vibrant pieces in front of colorful backdrops, like Pete in New York Knicks rugby-inspired polo, which is set to launch later this year, and Ziwe in a dark academia-leaning plaid suit and Princess Diana’s famous sheep sweater transformed into a roomy tote bag.

Plus, Rowing Blazers elevated its traditional basics with a refreshing take on the “grandmacore” aesthetic, featuring an array of bright colors and wacky prints that dominate the collection, including multicolored stripes on oversized silhouettes, statement knitwear featuring hearts, piano keys, and motifs inspired by a deck of cards, as well as patchwork-covered blazers, and plum-colored corduroy sets.

The brand is also expanding upon its signature sheep-patterned knits in partnership with Warm & Wonderful, which will now include a slew of new colorways and styles.

“I think sometimes people hear the word ‘classics’ and they think ‘stuffy.’ They hear ‘preppy’ and they think of something elitist and cringeworthy,” said Carlson in a press statement. “These concepts have been hijacked and given a bad name. They’re supposed to be about bright colors and beautiful fabrics, but more importantly: having fun, being yourself, and flipping the bird to anyone who takes themselves too seriously.”

Available now, you can shop the new collection, with items priced from $40 through $950, exclusively on the official Rowing Blazers website. View the full Rowing Blazers Fall 2021 campaign starring Pete Davidson and Ziwe, below.