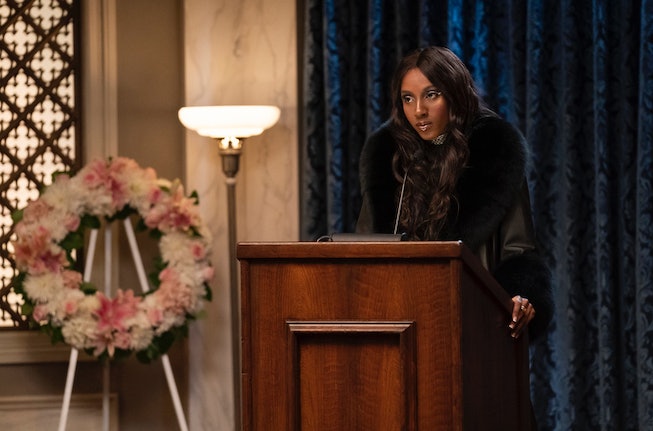 Earlier this year, during the height of the nationwide Black Lives Matter protests, Band-Aid announced that they would start offering their namesake product in “light, medium, and deep shades of Brown and Black skin tones that embrace the beauty of diverse skin.” After 100 years of only selling their signature adhesive bandage in its original beige hue, Band-Aid was now firmly “committed to taking actions to create tangible change for the Black community.”

For Ziwe, the hilarious comedian and writer whose Instagram Live-hosted Baited talk show quickly became the hottest thing to watch on Thursday evenings during the pandemic, Band-Aid’s sign of solidarity was “laughable.” Though she admittedly relishes the opportunity to cover her kneecaps in skin tone-appropriate bandaging, she can’t help but decry the performative activism that has become so popular for multi-million-dollar corporations in 2020.

It’s the subject of her eulogy in Amazon Video’s upcoming Yearly Departed special, which gathers a who’s who list of female comedians — including Tiffany Haddish, Rachel Brosnahan, Natasha Rothwell, Patti Harrison, Sarah Silverman, Phoebe Robinson, and Natasha Leggero — to eulogize the things that were lost over the course of this most chaotic year. Dressed in her finest funeral attire (in this case, a huge fur coat, a see-through gown, and a lime-green, fur-trimmed purse), Ziwe mourns the bygone era of one-shade-only Band-Aids while simultaneously taking a stab at the hypocrisy of corporate apologies for racism. Incisive and hilarious, Ziwe’s eulogy, like everyone else’s, is the perfect snapshot to cap off 2020.

Ahead of Yearly Departed’s premiere, NYLON interrupted Ziwe’s Survivor binge to talk about the joy of working with an all-female cast and production crew, balancing the universal tragedies of 2020 with her personal successes, what things have made her happiest this year, and who she’d most like to have on as the first “iconic guest” for her upcoming Showtime variety show.

Just to start, how did you get involved with this project?

Honestly, the team at Amazon just reached out to me and asked if I was interested in sort of eulogizing 2020. This has been such an impactful and wild year that I hope to never experience again, so I kind of jumped at the chance to eulogize it with some of my favorite people in comedy, like Tiffany Haddish, Patti Harrison, Rachel Brosnahan, Natasha Leggero, and Natasha Rothwell. Just all these fantastic, really brilliant women. I was so eager to do this project.

Did it feel different to deliver this eulogy to an all-female audience?

Well, definitely. I mean, when I first was invited to do this project, I got a list of the writers who were attached — it was Bess Kalb, Jocelyn Richard, who I knew from The Onion since like 10 years ago, Karen Chee, Akilah Green, and Franchesca Ramsey. I was just so delighted, because these are all people who I’m individually fans of. Seeing that they were collaborating together, I was beyond delighted to work with these really talented comedians. It was honestly a great experience. Even being on set, it wasn't just all-female on the writers’ side or on the performers’ side. You could feel that same vibe with the DP and the directors and, you know, all the different production people on set. It was such a really wonderful experience to be involved in a real women-led project, both in front of the scenes as well as behind the scenes.

Your eulogy is about the loss of beige Band-Aids, which in reality, is more a stand-in for this overarching idea of faux corporate solidarity in response to racial unrest. What about that topic stood out to you?

I think that corporate apologies for racism and corporations kind of shifting their strategy to address structural racism is so laughable. That eulogy really excited me because it was an opportunity to make fun of how simplistic the idea is of like, Hey, Band-Aids have been one color for all of eternity, and suddenly, we'll make them come in seven shades. I love the Fenty color ID comparisons — I think that's really silly and fun. It’s both meaningful but also kind of trite. I think that inherent contradiction is just so ripe for biting satire.

It’s interesting because your comedic style, at least as it’s presented on Baited, has always been about poking holes in the so-called “liberal bubbles” that many white people often find themselves trying to align with. You take these seemingly well-meaning people and confront them with things about themselves that don’t necessarily align with the self-image they’re trying to project. And I feel like your fascination with faux corporate wokeness is very much in the same vein. Were you thinking about that?

I just find that media strategy is inherently contradictory and it sort of undermines itself. So that's definitely an attraction. That's kind of what I do with my livestream and my live show, is [present the idea] that everything we're saying exists in this duality that doesn't really make sense. So yes, you see that again with this critique of beige Band-Aids. Because, well, it is really good — it’s high time that I have a Band-Aid for my kneecap that looks dark brown! I deserve that! But at the same time, we’re past that as a society. I find that you're kind of damned if you do, damned if you don't. I love that inherent inability to ever be right. I think that is so prevalent in my comedy, and I found it so prevalent in that eulogy that was written by that wonderful team at Amazon.

Yearly Departed is all about how horrible 2020 has been — and it certainly has been horrible — but it’s kind of funny to think about your casting here, since, in many ways, 2020 has been pretty incredible for you career-wise. You got your own Showtime show, you got a book deal, you got a personalized Ivy Park package from Beyoncé! Has it been weird living through this chaotic year while also making so many personal strides?

Hmmm...has it been weird living through this year while finding personal success? This year has been very unpleasant. I haven't seen my family in a very long time. I'm afraid to go to the grocery store. I have had personal success, but I've been working towards these goals for the better part of a decade. Honestly. If you look at my livestream, there have been roots in that for the last five, six, seven years.

So it's all these things coming to fruition at a really odd time in American history. But at the same time, who’s to say if I would've broken through, had people not been open to the idea of having public discourse about race? The timing, it stinks. This year stinks, man! It’s awful. I have acne all over my face! I mean, I am really so blessed and so fortunate that I could break out. I'm lucky — one-third of Americans are losing their homes, you know? People are going bankrupt because of their medical bills. I don't have that issue. But ultimately, I look forward to a time in history where, you know, this is not...life.

It goes back to that “inherent contradiction” you were talking about earlier.

Yeah. It's really such a very strange time. Just going back to the eulogy, there's no way I could eulogize beige Band-Aids had we not lived through an entire pandemic that led to activism, protest, and a racial reckoning. Like, the jokes that I'm making in this special would be totally different. I don't exist in a vacuum. You don't exist in a vacuum. We're just all sort of conscious about the world in America that has changed so drastically.

My last day in person at work at Desus & Mero was March 18th. You know, we’re all trying to adjust and I’m trying to make a better world and create really interesting, substantive conversations through comedy with the art that I do. Even with this eulogy, it's really light and tight and it's about how Band-Aids now come in light-skin and dark-skin [tones]. But ultimately, it's about the ways in which we conceive and what those things we conceive say about our society. So we're trying to make really important points. But yes, we're now able to have these really grandiose conversations, in part, because of this cultural awakening.

This special is, of course, about the things we’ve lost in 2020. But on the other hand, what things have brought you joy this year? What things made you laugh?

I think what I’ve enjoyed the most, which I think is really prevalent in this Amazon special, is the ability to laugh at ideas and commentary that is inherently political. I mean, there was a time in comedy where it was sort of passé to talk about anything other than like, "Yo, I got a wife and she is so annoying!" It never really broke that beat. So I’m really interested in this, like, new world that was sort of created in the midst of tragedy that allows us to look the most difficult aspects of our society in the eye and say, "Hey, not only do I not agree with this, but I am going to make fun of it!" In that comedy, we have so much power to change the world that we live in. That's what gets me excited. I like to make people happy and I just want everyone to self-actualize a better world — for us and the most marginalized people in our community.

As we’ve recently talked about, you’ve been binging a lot of Survivor in quarantine. What about that specific show has resonated with you during this pandemic?

Well one, there are 40 seasons! So it will take me a very long time to finish it. But I just love the social strategy of people trying to maneuver to survive. I was never one of those people that would watch Survivor prior to the pandemic. My eyes were opened when I watched the Race Wars, where they pitted the different ethnic groups against each other. I thought it was absolutely absurd. So that was really my entry point. I just think it’s such an absurd social strategy game to watch. But truly, it's just...TV. I’ve just been staying at home watching TV, man. Well, that and reading books.

Speaking of books, you’re also working on your own. Have you always been interested in writing a book about your life?

It's a book of personal essays about race and media in America. It's not entirely about my life. It's in part about my life — like, I'll draw from personal experiences. But as far as writing the book, yeah, I have always dreamed of writing a book. I studied creative writing at Northwestern University, so I am beyond excited to get to do that. But writing a book is hard! I mean, who wants to sit down and just go back into their past?

Finally, you have a Showtime show on the horizon. What can we expect from it?

Expect a variety show that addresses race in media. It's going to be as hyperbolic and satirical as everything you've seen me do prior to that, and it's going to be a really good time!

Obviously, you have experience in this arena, having written for Desus & Mero. But is it intimidating stepping into the driver's seat? You're going from being a writer on someone else's show to doing something very similar for your own. How’s that transition?

Well, I love control. So the idea that I get to executive produce and star in something is really exciting. It’s exactly what I've always dreamed of since I was a five-year-old kid who wanted to be a pop-star-slash-president.

If you had the choice, who would you want as your first iconic guest — living or dead?

I don't know. Probably Kim Kardashian. Or maybe the guy who invented the beige Band-Aid!

That would be an iconic double-header.

Better yet, Kim Kardashian dressed in a beige Band-Aid.