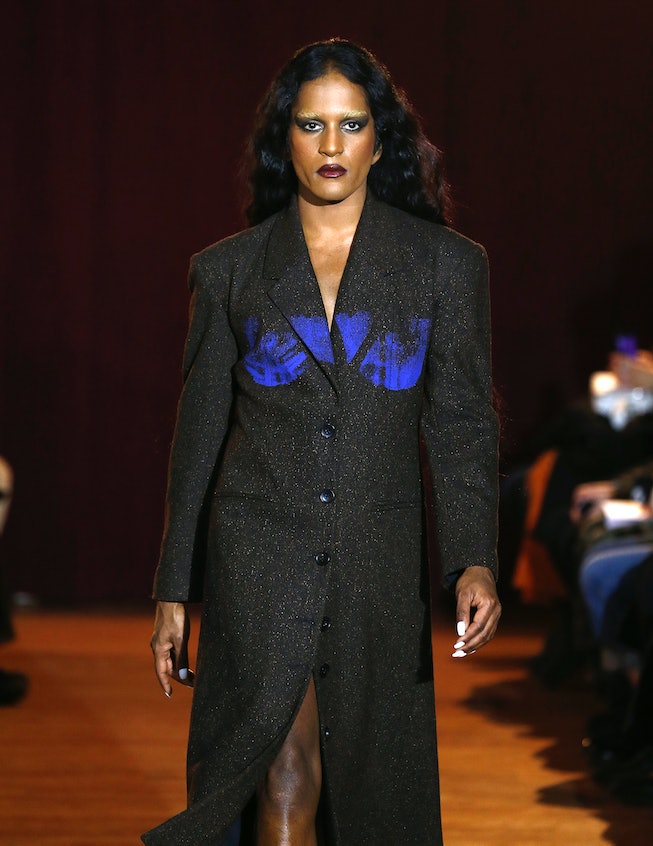 Ever since Puppets and Puppets launched in 2019, it’s become one of the most talked-about labels during New York Fashion Week. Founder Carly Mark named the brand after her dog and has transfixed fans and industry insiders with pieces that are a mix of highly technical construction, humor, and darkness. Take, for example, boned statement corsets, massive sculptural skirts that take up the entire runway, wheels of cheese as headdresses, and black leather bags with resin cookies attached to them. The latter of which has become the label’s definitive bestseller that retailers like Ssense can’t even keep in stock for longer than a day or two.

“I wanted to make a really classic handbag, but I also wanted it to be kind of funny and a critique, like, let’s talk about fashion through fashion, tongue-in-cheek,” Mark says of the hit accessory. “I operate to think about it on a big-picture level, but then also in this really reactionary level where I’m like, ‘OK, what do I like?’ I like black handbags and I like chocolate chip cookies. What happens if we put the two together?”

During Puppets and Puppets’ Fall 2022 runway show at New York Fashion Week on Sunday, Feb. 13, we saw some of the same bits of ingenuity: Carrots were strapped to a wooden bag, or the same coveted black bag swapped its cookies for little pumpkins instead. For her newest collection, Mark was thinking about witchcraft, covens, and powerful New Yorkers. The dark palette designs — a departure from previous shows — demonstrated that. Inky black knits, oversize long-sleeve tops, and tapestry coats and skirts covered in dogs were highlights of the show, to be sure. But there were also pieces that were a lot more commercial than collections past, such as sweaters branded with sequined logos and plenty of fall-worthy plaid.

“In past seasons, I’ve been really focused on story and putting things down a runway that were in line with whatever story I was trying to tell,” says Mark. During the early days of Puppets and Puppets, she looked at the brand like more of an art project, making one-offs of each piece for the show. “Now that I’m in production, things are being sold. I’m really looking at individual pieces and thinking like, ‘Do I want to own that?’ And sometimes I love the piece, but I don’t really want to own it. This season I'm really focusing on putting everything down a runway that I would wear myself.”

There was plenty of craft, too, an element that Mark prioritizes with her fine art background. “I’ll see a sculpture by a friend and be like, ‘That’s amazing. That would look really amazing in earring form,’” she recalls. Her ultimate goal through working with other artists? The ability to bring art into a commercial space. Mark was also inspired to move into art from fashion because she thinks it’s easier to make a statement. “Fashion is not a niche audience,” she says. “Fine art has a way of sometimes being more of a pretentious platform, and fashion is for everyone.”

While the early days of Puppets and Puppets may have challenged the idea of wearability, it now is about building a puzzle of how to integrate things that don’t necessarily seem wearable into the equation. “I think in the beginning there was more of critiquing fashion, but there was a big shift in the brand during the pandemic,” she says. “I went into production during the pandemic. But I think because we’ve already started that language, and it will always be part of the language.” One of her favorite examples of this is the label’s structured corset boning, a style that’s become an on-trend favorite over the past few seasons.

The other big draw of the brand? You can’t expect to attend a Puppets and Puppets show and not really feel like you’re truly at a performance. Whether that has to do with some of the overtly extreme pieces on the catwalk or the performance itself. At New York Fashion Week, a tap dancer clapped, tapped, and jumped his way through the Fall 2022 show on a raised platform in the middle of the venue. The talent’s sound was the only noise orchestrating the models walking.

“I love the high energy that happens at a show — and then it’s gone,” says Mark. “It’s this very experiential visceral thing. I always try to find ways to make the Puppets experience unique. I want you to escape yourself, at least for, like, nine minutes.”

“I hope that the things that I make and do make people kind of excited to be alive,” she adds with a laugh. “And I always want make things that feel like a forward movement.”