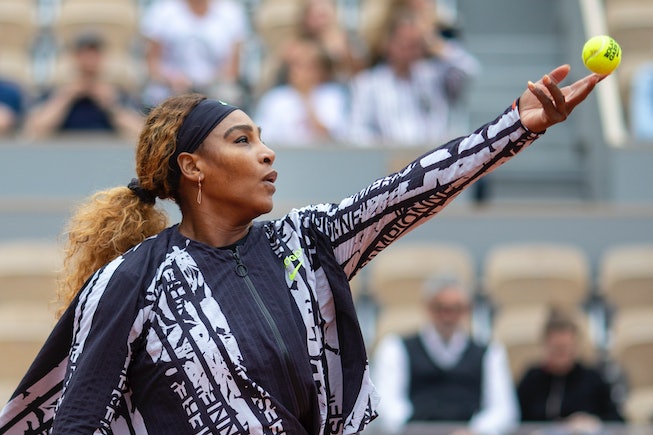 Both on and off the tennis court, Serena Williams always uses fashion to make a statement. But she recently shared that her custom ensemble from the 2019 French Open, designed by her late collaborator, friend, and fashion legend, Virgil Abloh, wasn’t his original outfit plan for her.

After facing criticism for her catsuit at the French Open the year prior, Williams wore a matching crop top, tennis skirt, and printed-cape jacket inscribed with the French words for “mother,” “champion,” “queen,” and “goddess,” which were meant to help her stay inspired throughout the match. But the original ‘fit Abloh designed for her took a much bolder strike.

“So the collaboration for the French Open — I still kind of regret not doing what Virgil told me to do,” Williams says in Vogue’s tribute film to Abloh’s legacy. “He wanted me to wear this long skirt with the crazy train, and then a cape with a train, and then just walk out on the court. And I’m thinking, ‘Virgil, I like fashion, and I like pushing the envelope, but this — I just don’t think I can do this.’”

When she saw him next, she instantly admitted that she should’ve gone for it. “I just wasn’t brave enough to go out there in all the red clay, and just walk out in this train, of like, a Met Gala at the French Open,” she recalls.

Abloh and Williams had collaborated on several looks in previous years, and the two first teamed up in 2018 for an Abloh x Nike collection designed as an ode to the tennis champ. Since then, Williams wore Abloh-designed outfits to both the 2018 French and U.S. Open, as well as Abloh-designed Air Force 1s to the 2019 Met Gala. Most recently, she walked the runway for the late designer’s Fall 2020 collection (his final one) at the Paris Fashion Week as tribute.

Watch more of Abloh’s closest collaborators, including Williams, Bella and Gigi Hadid, Karlie Kloss, and more reflect on the designer’s fashion legacy, below.

NEXT UP
Culture
Marie Faustin Loves To Waste Men’s Time
Culture
The Cutest Couples At The 2023 Grammys
Fashion
Jenna Ortega Is The Face Of Adidas’ Newest Line
Fashion
The Wildest Front-Row Looks From Couture Week In Paris
Style + Culture, delivered straight to your inbox.