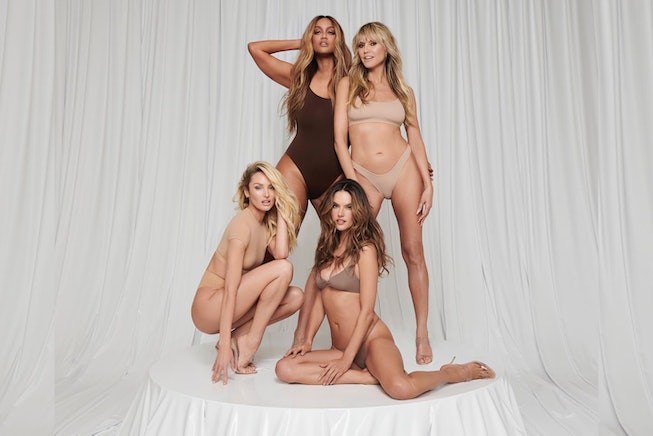 Following the recent launch of her new swimwear line, it seems that Kim Kardashian has been working harder than ever at SKIMS, and this time is no different as the brand just launched its newest campaign with an A-list cast of supermodels.

On Monday, April 4, SKIMS revealed the aptly-titled “Icons” campaign featuring Tyra Banks, Alessandra Ambrosio, Heidi Klum, and Candice Swanepoel together for the very first time. Shot by photographers Sandy Kim and Greg Swales, the quartet can be seen in SKIMS’ “Fits Everybody” collection, including high-waisted underwear, stretchy bralettes, bodysuits, and other form-fitting silhouettes from the line. In an Instagram post from Kardashian, she is also spotted alongside the models in a group shot, sporting her brand’s signature neutral-toned pieces. “OK so I wasn’t supposed to be in this @SKIMS campaign but I stopped by and jumped in because it was too iconic,” she wrote in the caption.

“Tyra, Heidi, Alessandra, and Candice have each played such a distinct and everlasting role in shaping the industry. Outfitting these incredible women in our ‘Fits Everybody’ underwear collection is truly a full-circle moment for me,” said Kardashian in an official statement. “Our underwear is such a game-changer and has been our best-selling collection since we launched — it stretches to twice its size and is so comfy it just molds to your body so it fits everyone perfectly. I’m thrilled to celebrate these women alongside a collection that our customers adore.”

You can now shop SKIMS’ Fits Everybody collection online at skims.com, with its campaign set to be shown outdoors in five cities: Miami, Chicago, New York City, Los Angeles, and San Francisco. While we wait to catch the beloved supermodels on the billboards, view the full campaign in more detail, below.

NEXT UP
Fashion
Getting Ready With Richie Shazam For Her Directorial Debut
Fashion
DL Eyewear’s New Sunglasses Are For The Schitt’s Creek Fans
Fashion
Jisoo Of Blackpink’s Best Fashion Moments On The Red Carpet
Fashion
How To Style The Mini Skirt In 2022, According To Celebrities