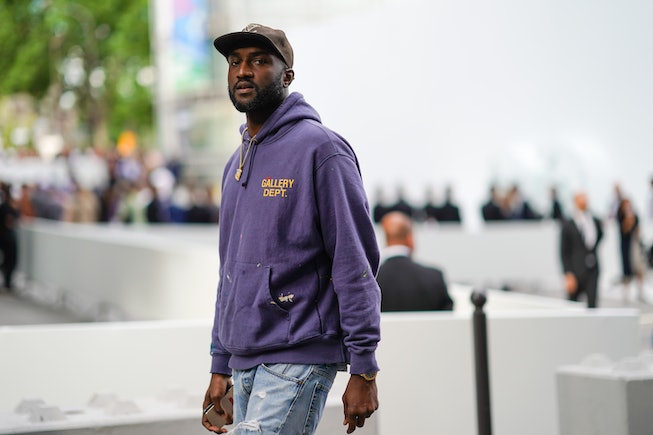 Virgil Abloh, the founder of Off-White and the Men’s Artistic Director for Louis Vuitton, has died at the age of 41 on Sunday, Nov. 28. According to an official statement released on Instagram, he passed away due to a rare, aggressive form of cancer called cardiac angiosarcoma. Abloh is survived by his wife Shannon Abloh and his two children, as well as his parents and sister.

It is reported that Abloh had been privately battling cancer since 2019, undergoing numerous challenging treatments. Shortly after his diagnosis, he also took a break from his work schedule for a while following doctor’s orders by canceling several events and appearances, such as taking the finale bow at his Spring 2020 Off-White show.

“We are all shocked after this terrible news,” LVMH Chief Executive Officer Bernard Arnault wrote in a statement. “Virgil was not only a genius designer, a visionary, he was also a man with a beautiful soul and great wisdom. The LVMH family joins me in this moment of great sorrow, and we are all thinking of his loved ones after the passing of their husband, their father, their brother, or their friend.”

Abloh undoubtedly left behind such an abundant legacy throughout his career in fashion, art, music, and beyond. Born and raised in the outskirts of Chicago to parents originally from Ghana, he actually studied civil engineering at the University of Wisconsin-Madison before earning a master’s degree in architecture at the Illinois Institute of Technology. He started his career in fashion with Pyrex Vision in 2012, flipping screen-printed Ralph Lauren flannels, and then later launched the Milan-based brand Off-White back in 2014, which reinvented the concept and trajectory of streetwear into the luxury fashion space. Abloh then went on to become the Men’s Artistic Director for Louis Vuitton in 2018, making him the very first Black designer to ever hold the title with the storied French fashion house.

Throughout his three-year-long tenure at Louis Vuitton, Abloh has since made a number of strides that not only redefined and disrupted the fashion industry but he also gave back to the community. Back in 2020, he raised $1 million for his scholarship fund aiding Black fashion students, and this past summer, Abloh and Louis Vuitton teamed up and contributed a $380,000 donation to UNICEF’s education programs in Ghana. In July 2021, LMVH also announced a new partnership with Abloh, where he worked with the luxury conglomerate to “help launch new brands and foster its existing partnerships outside of fashion, including wine and spirits and hospitality.”

Following the news of Abloh’s passing, Louis Vuitton will continue to hold their Spring 2022 menswear show in Miami as planned on Tuesday, Nov. 30, in loving memory of their creative director. The runway show will include a total of 72 looks including an additional 30 brand-new outfits, which is set to highlight a “gray formalwear theme.”

“Virgil was not only a friend, great collaborator, creative genius, visionary and disruptor, but also one of the best cultural communicators of our times,” Louis Vuitton’s chief executive Michael Burke said in a statement according to BoF. “He paved the way for future generations. As a devoted supporter of his community through his charities and passions, he was an eternal optimist who believed anything was possible. Louis Vuitton will proudly continue to celebrate his legacy with a final show in Miami, per his wishes.”

Tributes for Virgil Abloh have flooded social media following the news of his passing, including heartfelt messages from fellow designers to musicians and even models and muses, below: