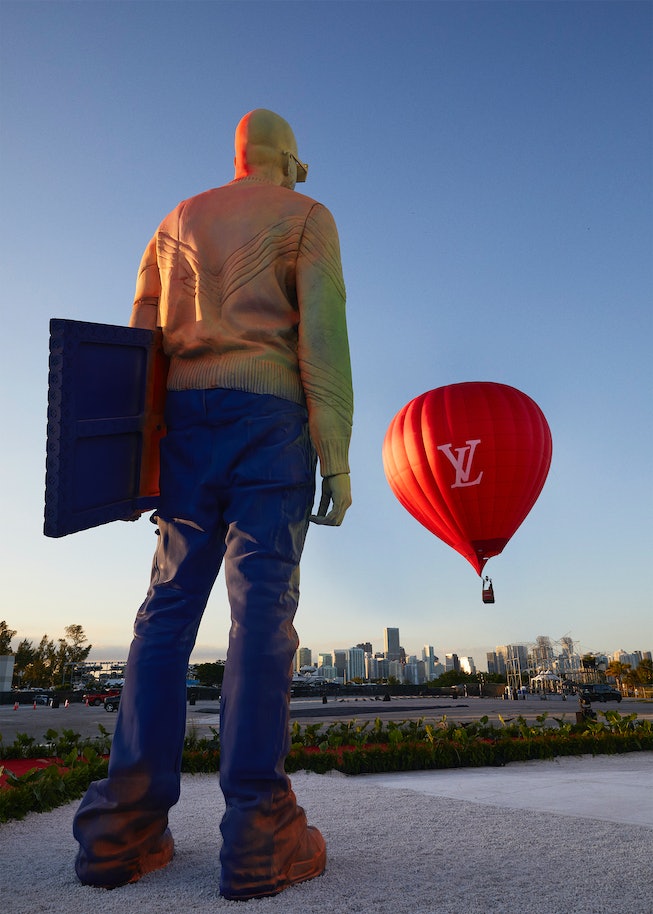 Following the death of Virgil Abloh, Louis Vuitton held its Spring 2022 “spin-off” menswear runway show in Miami, titled “Virgil Was Here,” on Tuesday, Nov. 30. After serving as the founder of Off-White and the Men’s Artistic Director for Louis Vuitton of three years, this collection marks the very final designs from Abloh himself, who recently passed away from a private battle with a rare form of cancer.

Despite the sudden news, the French fashion house continued on with the scheduled event during Art Basel in honor of the late designer, taking place in a secluded and private location across from Miami's Marine Stadium. “As a devoted supporter of his community through his charities and passions, [Virgil] was an eternal optimist who believed anything was possible,” said Michael Burke, Louis Vuitton’s Chairman and CEO, in an official statement. “In this same spirit, we at Louis Vuitton will proudly continue to celebrate his legacy with a final show in Miami, per his wishes.”

Compared to the brand’s past two seasons — with its Fall 2021 collection embodying dark masculine archetypes and Spring 2021’s primary-colored designs — the latest showcase is another view of an already-seen collection, along with a debut unveiling of 30 additional looks. Taking inspiration from the idea of “boyhood,” Abloh’s vision for redefining men’s fashion is undoubtedly present throughout the show. In his manifesto from Chicago back in July 2020, he wrote that through his Spring 2022 collection, and beyond, contributes “to a Black canon of culture and art and its preservation. This is why, to preserve my own output, I record it at length. You are witnessing unapologetic Black Imagination on display.”

Ahead, check out our breakdown of everything you need to know from Louis Vuitton’s Spring 2022 “spin-off” menswear show in Miami dedicated to Abloh’s life and legacy, plus details on the celebrities who took over the front row seats and the firework finale. You can also see the best and most memorable moments from the catwalk in the brand’s official livestream, below.

Louis Vuitton’s “Virgil Was Here” & Spring 2022 “Spin-Off” Show: The runway event was held in a secret location in Miami

Guests gathered on a port across from Miami’s Marine Stadium for the brand’s “spin-off” runway show. Upon arrival, attendees were greeted by greenery, which was cleared out for the makeshift catwalk, and it was also surrounded by the glistening water and views of the Florida city’s skyline. There were also red hot air balloons stamped with the “LV” logo and sculptures that filled the space resembling a black paper airplane and a three-story figure of the late designer, some of which acted as motifs that appeared throughout the collection.

Many star guests attended the “Virgil Was Here” show, including Abloh’s dearest friends, fellow collaborators and colleagues, and not to mention, musicians and muses. The front row seats were filled with celebrity appearances from the likes Kanye West and Kim Kardashian, who brought along their 8-year-old daughter North to view the collection. Others included Pharrell Williams, 21 Savage, Rihanna and A$AP Rocky, Jerry Lorenzo, Don C, Michèle Lamy, British Vogue’s Edward Enninful, and many more.

Some of the celebrity guests even modeled in the show, like Kid Cudi, who also was seen in the designer’s first menswear show for Louis Vuitton in 2018, along with Migos’ Offset. Kid Cudi wore an all-neon green ensemble to match his vibrantly dyed hair, while Offset opted for a western-inspired jumpsuit with a belt at the waist. The Migos rapper completed his ‘fit with a matching blue hat and a black knitted balaclava, cowboy boots, and a metallic monogram trunk in hand.

Louis Vuitton kicked off its Spring 2022 show with an audio message from Abloh as he discusses the creative process and the idea of “returning to this place of childlike wonder and curiosity” that the designer had been exploring through his work. This is definitely evident in his latest runway looks, as the vibrant collection included a total of 72 looks, plus an additional 30 brand-new outfits, all of which add a whimsical feel compared to Abloh’s past seasons. For his final show, the models made their way down the catwalk, featuring looks that reference different aesthetics, like western attire and streetwear, and were remixed into into a colorful, Abloh-made style of its very own. The “spin-off” show also displayed brightly-hued silhouettes and rainbow-gradient colorways, which have became a staple for the designer and Louis Vuitton men’s over time, on neon suits, printed jackets, and more.

If there’s anything we know so far about Abloh’s time at Louis Vuitton, it’s that he knows how to take his accessories game to the next level. Some standout pieces include fuzzy hats splashed with neon, puffed-up sporty gloves, colorfully monogrammed luggage (from both Louis Vuitton and longtime collaborator Nike), and hypebeast-approved sneakers. Oh, and the puffer hood and knitted balaclavas are bound to be street style staples during the winter’s fashion weeks across the globe.

Louis Vuitton’s “Virgil Was Here” & Spring 2022 “Spin-Off” Show: The runway show ended with a light show and fireworks commemorating the life and legacy of Virgil Abloh

Louis Vuitton ended the runway show with an unforgettable finale featuring a captivating display of lights and fireworks to honor the life and legendary contributions of Abloh. The evening sky lit up with drones that arranged and illustrated motifs, like paper planes and palm trees, that paid homage to the latest collection. The guests also captured and shared the lights on social media, as they moved around to spell out Abloh’s initials, along with the phrase and title of the runway show, “Virgil Was Here.”