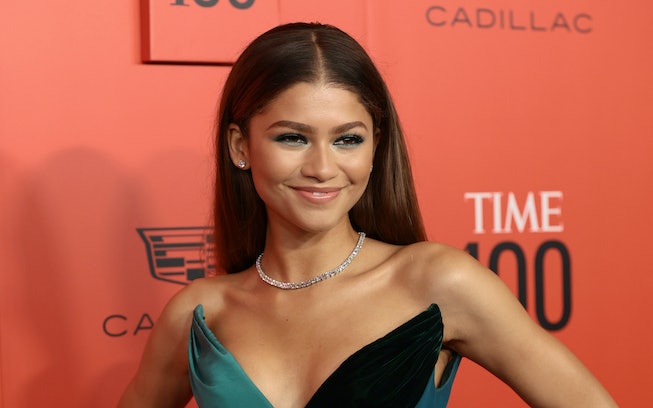 Following Valentino’s Spring 2022 “Rendez Vous” series back in February, Zendaya stars in yet another campaign for the Italian fashion house, this time for Pierpaolo Piccioli’s “Pink PP” Fall 2022 collection.

The brand has tapped the Euphoria actress Zendaya and F1 racecar star Sir Lewis Hamilton to model Valentino’s latest collection, with the full campaign slated for release next week. In a series of new photos lensed by photographers Micheal Bailey Gates and Nicolas Kern, which were released on Wednesday, Aug. 3, the duo can be seen wearing monochrome Barbiecore-inspired outfits and posing in a pink playhouse set. Zendaya is captured donning a long-sleeve mini dress paired with chunky platform boots, a studded handbag, and matching gloves. She’s also photographed in another outfit, opting for a suited look styled with a sheer top.

Valentino is also expected to release a clip with the beloved actress, once again by Euphoria cinematographer Marcell Rév who also collaborated on the brand’s “Rendez-Vous” campaign. The upcoming campaign video will take viewers through a dreamlike scenario featuring a sofa in the middle of the studio and a soundtrack by Yazoo’s 1982 song “Only You.”

Over the last few years, Zendaya has starred in quite a few projects for Valentino after being named global brand ambassador in December 2020. Since embarking on her fashion journey with Piccioli and the fashion house, she has been seen at some of the designer’s shows, as well as sporting the brand on the red carpet and fronting its campaigns.

NEXT UP
Fashion
Telfar Thinks You Need An It Wallet To Go With Your It Bag
Fashion
The Best Celebrity Fit Pics From Paris Men’s Fashion Week
Entertainment
Mariah Carey, Xtina, Missy Elliott To Play Lovers & Friends Fest 2023
Entertainment
Hawa Has Her D'Angelo Moment In Playful "Actually" Video
Style + Culture, delivered straight to your inbox.