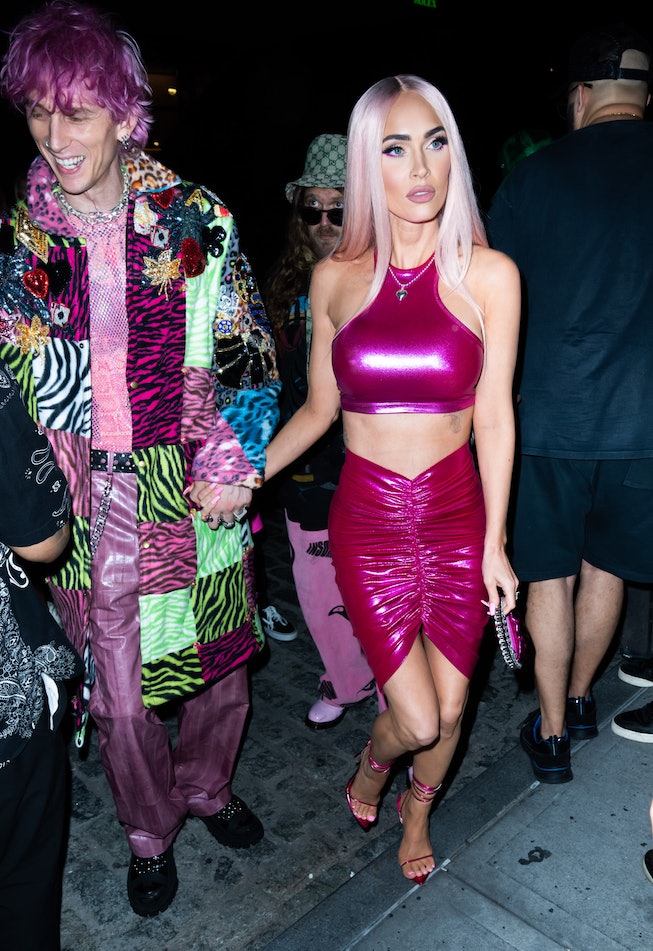 As everyone’s favorite doll growing up, Barbie has become a pop culture phenomenon, from fashion collaborations to the cultural reset that was Aqua’s 1997 hit song “Barbie Girl.”

But ICYMI, we’re entering an era that welcomes the return of hyperfeminity’s signature glitz and ditz. In the past few months, Barbiecore has become the latest aesthetic taking over our feeds and our wardrobes once again, so far amassing more than eight million views on TikTok alone. Many things can be attributed to its very pink rise, like Great Gerwig’s upcoming adaption of Barbie and Valentino’s Fall 2022 “Pink PP” collection debut, which has since taken over the red carpet.

These days, the phrase “pretty in pink” has evolved quite literally to donning head-to-toe pink. The vibrant colorway has also found its way on the likes of celebrities, including Kim Kardashian during her appearance on Saturday Night Live back in October, Scream actress Jenna Ortega, Bridgerton’s Nicola Coughlan, and most recently, Megan Fox and Machine Gun Kelly’s matching pink outfits. And we can’t forget Nicki Minaj’s early influences on the trend, as the musician has worn bright pink wigs and diamond-studded Barbie chains since the start of her career in the late 2000s.

You can never own too much pink and this year, it’s about time to stock up and channel the Mattel star herself. See 24 super-duper pink pieces to shop and channel the latest Barbiecore aesthetic, ranging from platform heels to terry mini skirts and so much more, ahead.

In case you’re looking for your next summer bikini, this shimmery two-piece from Triangl is destined to make you feel pretty in pink (literally!)

Dress up your going-out ‘fits with Jules Kae’s Lillian handbag, which is handwoven and accented with a gold chain shoulder strap. Plus, the mini bag is a lot roomier than it appears.

There’s always room in our closets for another pair of mules and iindaco’s Ade sandal has a stunning crystal flame heel.

This pink oversized tee from Teddy Fresh is a must-have piece if you’re wanting to make a fashion statement in comfort and in style. I mean, look how cute this teddy bear is!

The fuzzy handbag trend is still going strong so why not opt for a baby pink version of it?

We’re still adding more bucket hats to our wardrobes this year and with Barbiecore on the rise, this bubblegum pink version from Kangol is one you should cop.

Urban Sophistication’s coveted dough case has a soft and squishy feel and is designed with hearts and in a vibrant pink colorway.

Find Me Now’s Sonatina midi dress is the perfect #Barbiecore piece for summer as it’s light and airy, and also has a cute midriff-baring peekaboo cutout in the front.

We’re ditching our itty-bitty shorts for the summer and instead opting for jorts, so why not get them in pink? Stay comfy yet stylish with Braindead’s denim whale shorts with the legs hitting right at the knee.

Add to your beaded jewelry collection with Ian Charms’ blush necklace, made with real cream and pink pearls.

Bask both in luxury and in comfort with Printfresh’s Bagheera cotton leopard robe, which is available in an eye-catching pink hue perfect for curling up with a good book or as a summer cover-up around the pool.

Hot pink hearts will never go out of style and this season, we’re dressing the fun pattern up (or down) with Reformation’s Noha mini dress.

Notte Jewelry‘s limited-edition Heart to Heart necklace is destined to be your pendant of the summer, crafted from a handmade pink shell and its signature candy-colored crystal gems.

Loti’s ruffled Marta Vest will still have you looking “pretty in pink” while staying comfortable with its breezy lightweight design.

Steve Madden’s Charlize rhinestone heels are the chunky platforms of your dreams and are best for those late-night outings at the disco.

The Moxie Romper
Laws of Motion

This bright pink Moxie romper from Laws of Motion features a deep v-neck and seamless back zip. Best of all, it can be custom engineered to fit any and every body type.

Maximalism is a girl’s best friend and this bedazzled flower-shaped necklace from En Route is adorned with pearly pink beaded pieces.

If you’re going for the head-to-toe #Barbiecore look, you can’t skip out on the sunglasses and Peta + Jain’s pink frames are our go-to choice.

We’re wearing scarves as tops all summer long and this strawberry swirl one from Frasier Sterling is what dreams are truly made of.

Become your very own Y2K muse by pairing your pink ‘fits with this terry mini skirt from I.AM.GIA, adorned with a low-rise stretchy waist and a diamond-studded “I.AM.GIA” artwork on the back.

These open-toed strappy sandals are for those super romantic date nights, studded with jewel embellishments in a Barbie-like fuchsia hue.