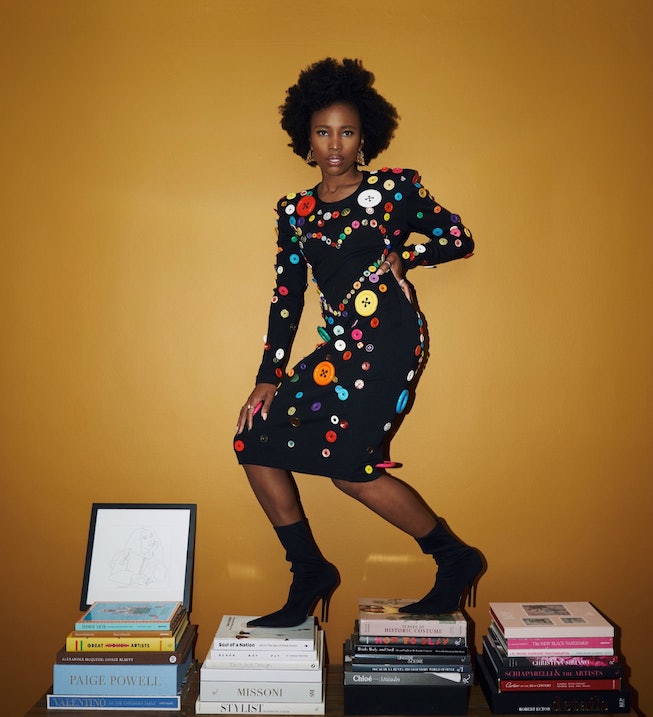 During the peak of holiday gifting season, Thrilling has teamed up with celebrity stylist Zerina Akers to offer a curated vintage collection to help you with your shopping needs. The edit follows Thrilling's most recent collaboration with Clueless costume designer Mona May, who handpicked 500 secondhand items that channeled her expert '90s-inspired aesthetic. Akers turned to the same era for inspiration, as well, but expanded upon the generation's hip-hop and R&B scene, which championed collaboration, celebrated personal style, and highlighted female musical acts, including Salt-N-Pepa, TLC, En Vogue, and Destiny's Child.

"Initially I was inspired by female empowerment and wanted to find a way to communicate that with us being two women-owned businesses coming together," Akers, who's best known for styling Beyoncé and founding Black Owned Everything, an extensive directory and marketplace of Black-owned businesses, tells NYLON. "The last time I remember seeing that consistently was in the '90s. I wanted to curate a collection that was on-trend at the moment and feel nostalgic."

Thrilling owner Shilla Kim-Parker reached out to Akers on a whim with the idea of collaborating. "We reached out cold to Zerina, and were blown away not just by her response, but by her generosity of spirit throughout this collaboration," she says. "Despite the fact that Zerina has done work at blockbuster scale with blockbuster clients, she has been passionate about lifting the voices and profiles of small, independent Black brands and companies."

Thrilling x Black Owned Everything is live and available to shop now on Thrilling's website, featuring pieces from FUBU, Tommy Hilfiger, Jean Paul Gaultier, and more. One of Akers' favorite picks is a Patrick Kelly jacket that she says "brings a full circle moment to the collaboration. He was a pioneer for Black designers." Plus, there's a mix of high and low designer items, including Jean Paul Gaultier, FUBU, Tommy Hilfiger, and more. "There’s a Christian Dior button-up bodysuit that would be great with a pair of jeans," adds Akers. "And the perfect pair of fleece-lined Carhartt jeans that will serve someone perfectly this coming winter."