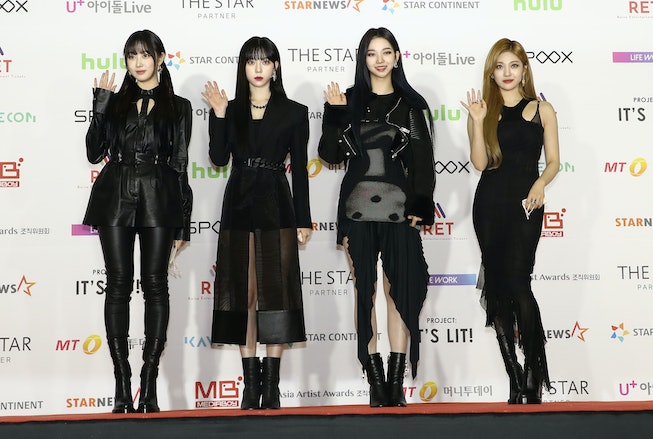 Before aespa was the first K-pop girl group to join the Macy’s Thanksigving Day parade this year, they spent a day touring New York City with comedian Roy Wood Jr. for a segment on The Daily Show with Trevor Noah, which aired on Tuesday.

Giselle, Winter, Ningning and Karina rode around in puffy jackets and blankets on the top level of a tour bus with Wood, who was perplexed that their avatars were not present, as he had saved seats for them on the bus. aespa explained the avatars were hanging out in the Flat, or their “virtual space.” “They’re not real people,” Giselle explained.

Wood was certainly interviewing the group for the dads at home who were wondering what “all this talk of k-pop is about,” first asking the group what “aespa” means.

“The a and e mean ‘avatar’ and experience,” Giselle explained. “It’s like having a two-sided thing where you have an avatar friend and we experience a new world together.”

“Yeah, a metaverse,” the group replied in unison, which is all the explanation we need, even if that doesn’t really answer any questions. aespa is of course famous for their mesmerizing performances and for being the first group with their own AI avatars, known as the æs — a trend that Grimes is recently getting in on, recently launching her own AI group, NPC.

They also drove on Madison Avenue, where aespa spotted Givenchy and told Wood that everything they were currently wearing was Givenchy, as they are brand ambassadors. We love some (accidental) product placement. He took them to Times Square, which aespa described as a “shiny new city,” by the Broadway theater playing Harry Potter and the Cursed Child, and down Madison Avenue, where Giselle said, “Hi Blair!” referring to where Blair Waldorf might live. They ended the tour by doing karaoke, where Wood sang a rendition of “Don’t Stop Believing,” and aespa looked horrified.

They promised to show him around Seoul one day — that is, if they have time amidst their insane success. aespa released their six-song EP Savage in early October, which sold 510,000 copies during the first 15 days of its release, and per Forbes, became one of the most successful releases in U.S. history by a K-pop girl group. Wood asked them what the most views one of their videos has ever received is and they replied, “one hundred million.” He had to sit down.

Anyway, while we eagerly await more releases from aespa, you can watch the entire clip of aespa touring NYC here, below.