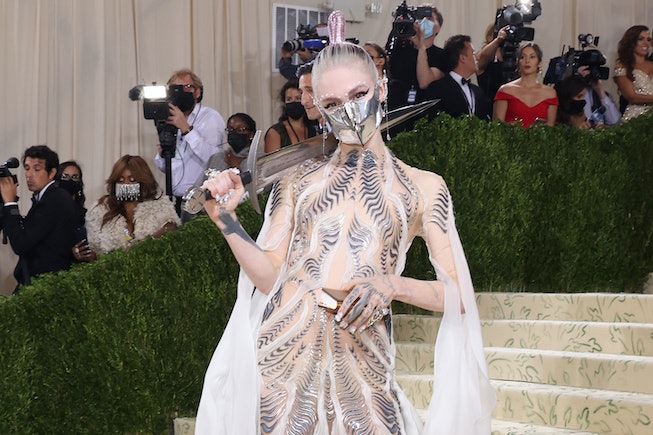 It was only a matter of time before Grimes expanded her futurist empire to include more than just her. The visionary singer is a famous AI advocate, from releasing an AI lullaby to help X AE A-XII sleep to her next album being a space opera about a lesbian AI romance. Now, she’s staying oh so true to her brand and forming an AI girl group called NPC — which makes its debut on November 12.

Wasting no time, they’re making their debut on DJ Chris Lake’s track, “A Drug from God”, which you can hear a snippet of on Lake’s Instagram, though it will be about a month until we see what the band looks like.

On Instagram on November 10, Grimes announced the launch of the group, writing: “Were super behind on everything and you’ll all see why in a month or so , so I apologize abt delays of music and visuals. Gna be catching up on the girls visual development and whatnot - but me and @chrislake just needed to get this song out cuz it’s been going so hard at festivals!!!!”

Grimes looks amazing in the photo — that breakup looks good on her! — and she included the unretouched one as well (in which she still looks amazing...), writing “(((((PS i included the un retouched image cuz this is more retouching than i normally do and whilst I look hot haha I do fear for the mental health effects of ye olde photo shoppé,” she wrote. “I may have had some filler mishaps over the years but def didn’t get a nose job haha.”

The name NPC is a reference to the gaming acronym “non player characters,” which is a video game character not controlled by a player. If nothing else, Grimes is giving us all the AI curriculum that we all may need to exist in the new world order.

NPC is the latest AI girl group project, following K-pop’s aespa, who recently made history as the first K-pop girl group to join the Macy’s Thanksgiving Day Parade lineup. The project is in good hands; Grimes is a high-concept artist and even if she’s the only one who knows what’s going on, that’s reason enough for us to follow her — even if sometimes she occasionally goes on bizarre TikTok tangents about AI being the “fastest route to communism.” Her argument? “AI could automate all the farming and weed out all the corruption, thereby bringing us to... as close as possible to genuine equality.” We’re listening. For what it’s worth, she did also post a TikTok debunking rumors that she was an avowed Communist. The saga never ends!

Listen to the first, rave-ready single, “Love is a Drug from God,” below.