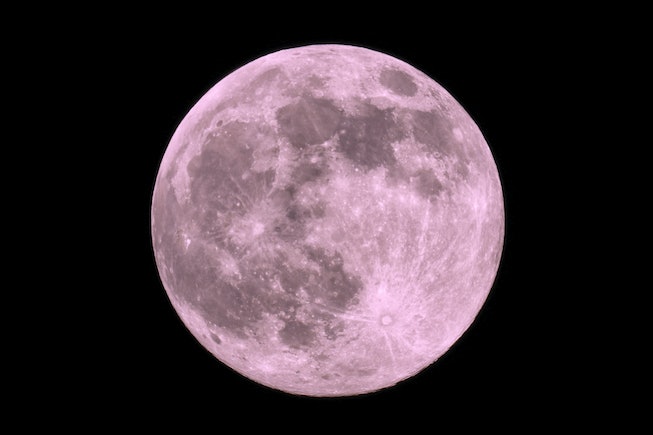 April, famously the cruelest month, has actually been home to 2022’s most psychedelic astrology. Along with a historic Jupiter-Neptune conjunction in the dreamy waters of Pisces, April’s cosmic weather also boasts a boundary-less Pisces stellium, and an incoming solar eclipse on the Taurus-Scorpio axis. If that sounds like a lot, that’s because it is — but fear not! The universe is doling out some much needed balance in the form of a full moon in Libra. This lunation, also known as the Pink Moon, operates on harmony, and who among us can’t use an extra boost of Venusian stability? Ahead, find out everything you need to know about April 2022’s rose full moon in Libra, as well as how to make the most of its magic.

What is the Pink Moon?

As the first full moon of the astrological year (remember, Aries season kicks off the zodiac), the Pink Moon reflects the the beauty of the spring bloom it illuminates. Per the Farmer’s Almanac, the the North American wildflower pink moss phlox aligns with the April lunation, hence the rosy nickname.

What does the full moon in Libra mean?

The Venus-ruled air sign is all about invoking beauty and harmony, so this lunation is working to bring some equilibrium back as we recalibrate from the opened floodgates of the Jupiter-Neptune conjunction. “This is a moment for cinematic vision, spectacular fantasy, and then, the emotional fallout,” says NYLON astrologer David Odyssey. “Such historic Pisces transits will take you to your highest high, and just as soon crash your spaceship in the machine city, where gray disenchantment poisons the recent possibilities.”

After something so otherworldly, grounding is key. Cue the full moon in Libra. On April 16 at 2:55 PM EST, the full moon will be at its brightest, creating a moment of realization within the part of your birth chart that contains Libra. As the full moon squares Pluto in Capricorn, expect a fresh understanding of the relationships in your life — and the things that may be standing in the way of them accessing the harmony the air sign so desires.

What’s the best way to work with this lunation?

While the deluge of emotions and psychic transmissions from the Pisces stellium may be hard to see through, April’s full moon in Libra can help achieving harmony and balance through accountability, an honest conversation, and reflection. Remember that this lunation is ruled by Venus; any and all work done under the full moon in Libra works to introduce beauty and collaboration back into your life.