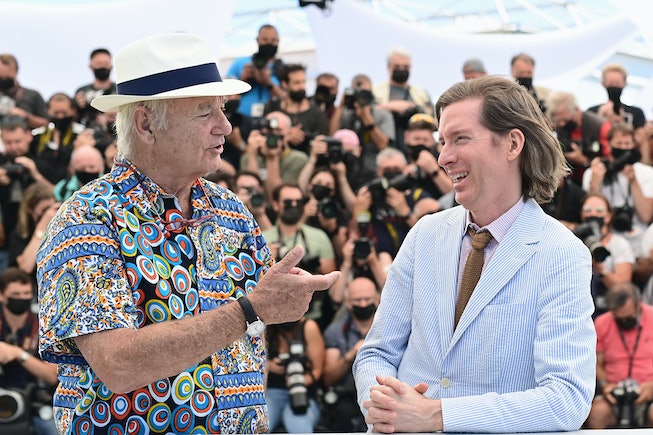 Wes Anderson may hopping from one film festival to another in promotion of the theatrical release of his long-awaited feature The French Dispatch, but that’s not enough to stop him from working on his next film. Back in June, it was reported that Anderson was preparing to spend his summer in the town of Chinchón, Spain, the location of his then-untitled film. Little was known about the flick other than its set featured a mock train station and classic, rolling Western landscapes. (Anderson and his penchant for twee, am I right?) But now, thanks to his frequent collaborator, Bill Murray, we have a name: Asteroid City.

“It’s the usual cast of characters,” said Murray of Asteroid City, speaking to LFF director Tricia Tuttle following the screening, as reported by Screendaily. “We’re shooting it in Spain, about 45 minutes from Madrid. It’s fun out there, we’re having a nice time.”

Asteroid City will also serve as Anderson and Murray’s tenth time working together, a fact of which Murray is well aware. “There are certain people you don’t take their calls; and there are certain people you just say, ‘OK, yeah,’” he said of Anderson. “He’s one of those.” Anderson first worked with Murray on the 1998 film Rushmore, liked what he saw, and continued onward for two decades and counting. He’s not alone: Owen Wilson, Schwartzman, Brody, Swinton, Anjelica Huston, and Willem Dafoe also count themselves as repeat Anderson cast members with no signs of stopping.

As for The French Dispatch and Timothée Chalamet’s tiny mustache, the film’s visual style has been praised by critics, with Variety‘s Peter Debruge saying “every costume, prop and casting choice has been made with such a reverential sense of absurdity” while IndieWire’s Eric Kohn calling the film “an endearing and liberated explosion of Andersonian aesthetics.” (Again, Anderson and his love for all things twee!) The film, which follows journalists set in an outpost of an American newspaper in a fictional 20th-century French city, hits theaters on October 22.