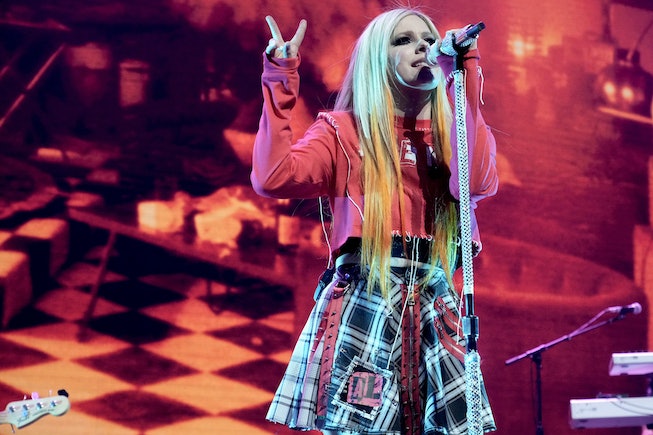 It’s always been Avril Lavigne’s world. Since the release of the highly influential 2002 album Let Go, Avril has remained a pop-punk icon — except for the brief duration of her inadvisable Harajuku era. Now, Lavigne is back in a big way, after signing on to Travis Barker’s DTA records for the release of her latest studio album Love Sux, out February 25.

Whether she’s back just in time for the latest mainstream pop-punk wave or if she’s the one carrying it, she’s still got a loyal fanbase obsessed with her every move. Just take the three TikToks she’s posted, which have both garnered over 10 million views.

The beauty of Lavigne’s new album, of course, isn’t just that we get a new set of ferocious, energizing pop-punk bangers, but also an accompanying press run. We haven’t heard from the artists in interviews in a long time, and getting reacquainted with the rockstar has been a treat — like learning, for instance, from an interview with Inked Magazine, that she has the word “f*ck” tattooed on her body in three different places.

Now, in a new interview with Mercedes In The Morning on Audacy’s Mix 94.1 Las Vegas, Lavigne said she’d love to do a Las Vegas residency. “I think it’d be fun. I would totally do it, for sure. Because then you can just stay in one place. You don’t have to travel every night to a different city,” she said, laughing. “It would be my show, my vibes, so absolutely.”

She also talked about the upcoming Sk8r Boi movie, an adaptation of the song that did wonders for text abbreviations. When asked if the movie was just a rumor, she responded: “It’s been a rumor actually my whole career. Since 20 years ago with the first album, people have been talking about it and there were all these articles and I was like I have to do this eventually.” She decided now is the time to make it happen. “It’s just been like meetings and I’m producing it and developing it and I can’t wait. It’s gonna be so fun,” Lavigne said.

And to answer the question that is obviously most pressing to those of us who are fully embracing pop-punk’s sartortial resurgence, when asked if she’s a Vans or DC girl, Lavigne was economical in her answer: “DC, like the big fat shoes in high school,” she said. “But I’ve been a Vans girl for years now, too.” Aww, she really is a woman for us all!

As we eagerly await Love Sux just in time for post Valentine’s Day blues, you can watch the whole interview here.