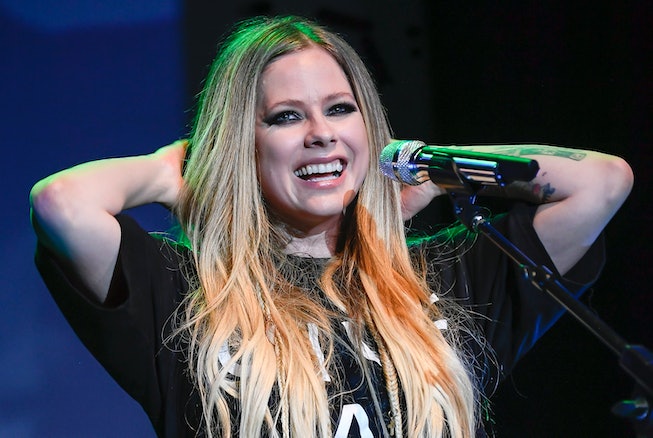 For those of us whose first concerts were Avril Lavigne or listened to scratched CDs of 2002’s Let Go on our Walkmans so much that they become unlistenable — every interview in Avril Lavigne’s extended press tour in advance of her upcoming pop punk, Travis Barker-produced album Love Sux is a magnificent gift. In a new interview with the very punk Inked Magazine, she shares the stories of the tattoos on her body — most notably, that she has “f*ck” tattooed on her in three different places.

“All of my tattoos for a good 15 years were just random,” she said in the interview. “I was probably super-drunk and I was like, ‘Let’s do this!’ I never really thought them out. But a couple years ago she sat down with artist London Reese and asked him to create a half-sleeve connecting all her tattoos into a larger, more cohesive piece — something she’d long wanted. Now, the main focus is a microphone surrounded by roses and music notes.

“I always wanted the half-sleeve, but I was trying to be responsible,” she said. “It’s funny, I say that while I have ‘f*ck’ tattooed on me three times.” More specifically, Lavigne has “F*ck You” on her middle finger, “Motherf*cking Princess,” on her pinky finger, and block letters on her rib cage spelling out, simply, “F*ck.”

It’s also immensely gratifying to know that Avril has the “Sk8er Boi” star tattooed on her wrist, that her song meant as much to her as it did to the cultural zeitgeist.

Avril’s “f*ck it,” mentality has always been one of the most powerful things about her, and obviously about punk in general — a mentality she needed to have as a young artist battling hesitance from industry execs who initially didn’t want her music to have so much electric guitar.

“When I first came onto the music scene I was doing something different,” Lavigne said. “I was a girl writing empowering songs, standing up to men and playing guitar-driven music. At the time that was [barely] happening, so it was hard for me to do that and people didn’t expect that from me. When I was in the studio writing I was like, ‘I want to rock out more, I want to have guitars,’ so I fought to have that sound.” And we’re all better for it!