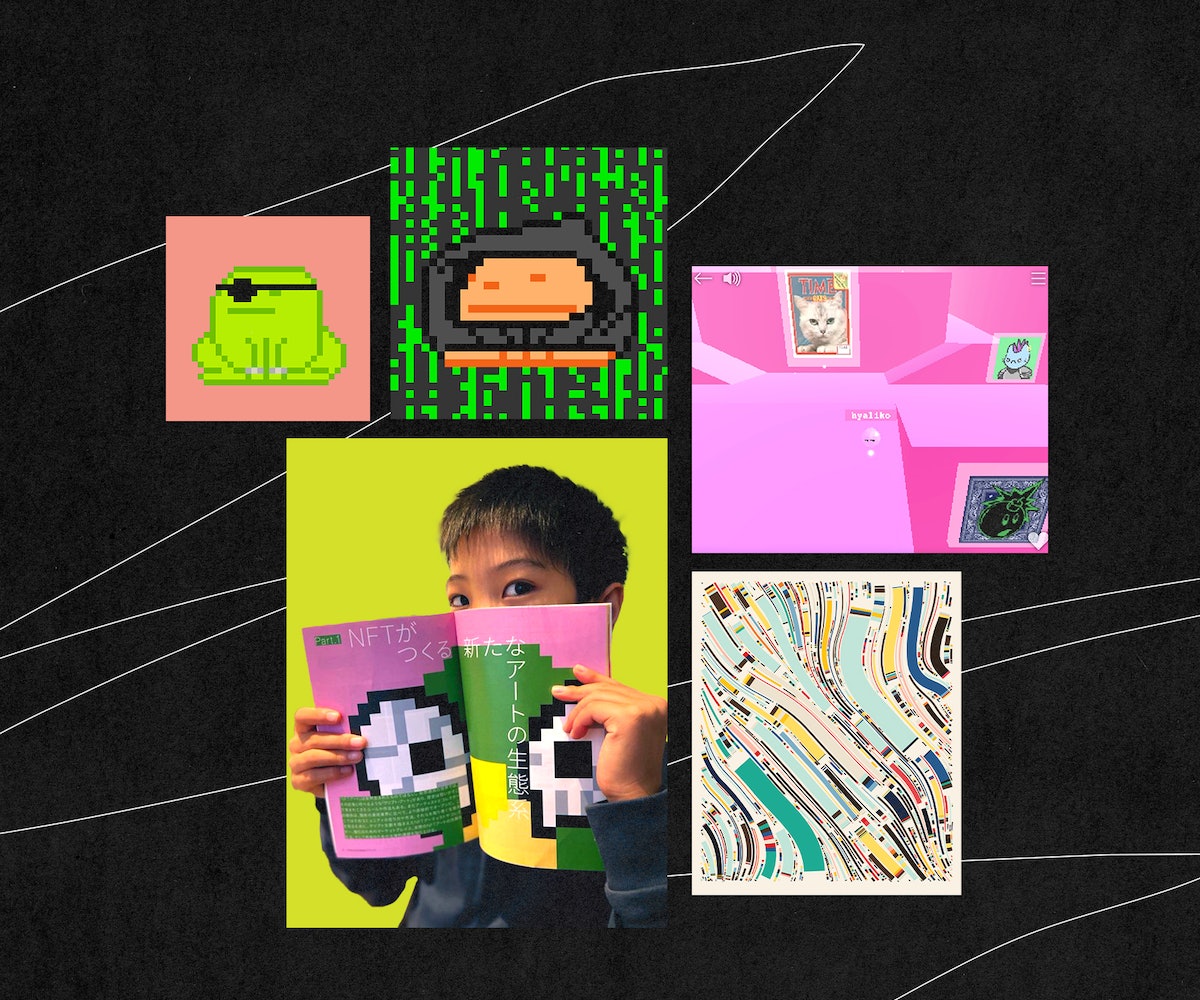 The life cycle of most internet discourse is fairly simple: something happens, people foam at the mouth either in agitation or in its defense, it hits the meme cycle, and finally it recedes into the ether, as if it never existed. And then there’s NFTs, the crypto-backed blockchain art that entered the cultural zeitgeist at the top of the year and became inescapable.

Once it became clear exactly what an NFT was — a non-fungible token, which can represent art on the blockchain — the opinions began rolling in from all fronts. Art world types felt threatened by the lack of control NFTs presented to galleries and collectors. If anyone with a crypto wallet could purchase art, where was the exclusivity that predicated its importance? Other arguments focused on the perceived value of NFTs; if anyone could simply “right-click-save” an image, what was the point shelling out money for one? And finally, as more celebrities released obvious and ultimately stupid NFT projects, the more the movement felt misunderstood at best, and scammy at worst.

A woman in tech I am not, but I began to understand the utility of an NFT came from the community it fosters. The open-source quality of some NFT projects opened a new facet of collaboration; if you really liked the project, no one was stopping you from building a game, metaverse, or pretty much anything you wanted. An NFT’s success is from its community, and that’s something even the most vehement of detractors can’t take away. While some NFT projects are in reality extremely corny drawings of primates, there's a lot that are — hand on my heart! — imaginative, collaborative, and actually cool. Read on for the 10 best NFT projects of 2021, in no particular order, below.

Pixelated illustrations of toads is one way of describing CrypToadz, the NFT project from the anonymous pixel artist Gremplin. But what’s cool about the project is its CC0 license — meaning that it’s a creative commons no rights reserved, which has influenced other projects to adopt the same policy. The CC0 of CrypToadz opens it up to spin-off projects, games, and more, which has catapulted the project into one of the most successful NFTs of the year. Plus, all the toads are really damn cute.

Zombie Zoo bravely asks the question: What if your childhood drawings never went on the refrigerator, and instead lived on the blockchain where they were bought and sold for thousands of dollars in Ethereum? Started by an 8-year-old boy in Japan who goes by the moniker "Zombie Zoo Keeper," each Zombie Zoo NFT is a zombified interpretation of creatures across the animal kingdom — including, but not limited to, sea slugs, butterflies, and koalas — which is exactly the type of tender imagination you’d expect from an 8-year-old.

While most NFTs point to a static image or video file, some actually use code in your web browser to form a picture. Art blocks allows artists to upload the code that generates visual experiences onto the blockchain, creating a platform for generative art and a unique way to store the digital art forever (or at least for as long as Ethereum is around).

New York City-based artist Danny Cole’s universe of abstract illustrations, Creature World, feels like trippy reflections you’d see on a serene, psychedelic adventure. Of the 10,000 creature illustrations, some emanate bliss, acceptance, and other profundities, while others with dilated pupils and crazed expressions are certainly in the process of realizing big things.

For those who question collecting art that can’t be displayed in the traditional (re: physical) sense, there’s Hyaliko, a 3D metaverse gallery that auto-generates a “show” based off the NFTs in a person’s wallet. Walk through your own gallery, visit a friend’s, or simply hang out — you’re the gallery director as far as anyone’s concerned.

Vine co-creator Dom Hofmann is something of a tastemaker in the NFT space, and his project Loot is another example of the world-building that’s possible through the creative use of the blockchain. Loot randomly built a list of items you’d be likely to find in role-playing games — a cloak, a sword, or, like, a random accessory you’d find in any Grimes music video — which allows collectors to use their items across game applications. Think of it as Dungeons & Dragons on the blockchain, if you’re into that sort of thing.

The surrealist exquisite corpse technique gets the NFT treatment with exquisite.land. The collaborative project gives each collector a tile upon which they can draw and work with the glimpses of surrounding art for a wacky yet seamless piece of art. The project also requires users to upload a PNG file of a special coin to create a tile — which is a cheeky play on the whole “right-click-save” trope.

Katherine Frazer’s psychedelic, kaleidoscope NFT projects feel far from the reputation of NFTs as dry, two-dimensional photos. Frazer’s work plays with her own perception of memory as she collects and recomposes her library iPhone photos and screenshots; each new piece augments reality and narrative, and the final result is an NFT that feels very much alive. Frazer’s work, which is often tied together with floral motifs, also draws inspiration from her foray into ikebana floral arranging; Ikebana arrangements, at their core, are living sculptures, and Frazer’s NFTs emanate a similar striking and harmonious quality of their physical counterparts.

As another Hofmann project, the code that renders Blitmap art lives on the blockchain via clever usage of the SVG file format. All the art work is made up of points that the computer generates, making each NFT’s size infinitely scalable and its color palettes variable. Like CrypToadz, it’s also a CC0 project, which opens it up to the community for infinite use in gaming, merchandise, and other derivative art projects.

Created by artist and software engineer Manuel Palou, mannys.game reimagined the thrill of unboxing collectibles into a gameified NFT project. While every NFT came as a manny, 3D avatars of the artist, collectors were incentivized to collect all the “rare” manny’s in order to mint the Golden manny and win the game. And minting the Golden manny came with a payoff — 60% of the NFT’s sales. Collectors forged unions to make it happen, and although that iteration of the game is over, mannys.game continues to evolve with integrations with other NFT projects, avatar customizations, and a robust community.

(Full disclosure: Palou is my boyfriend but I objectively think his project rocks.)