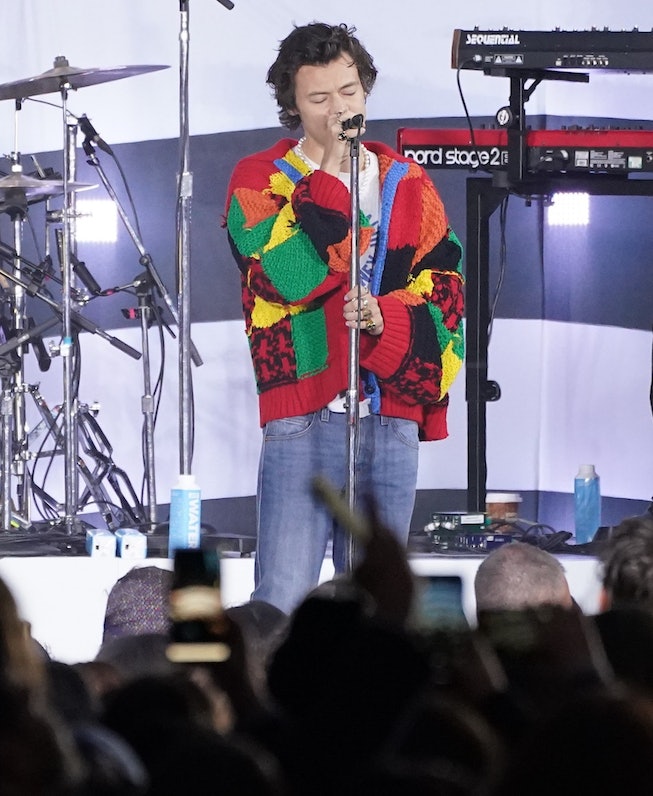 I’ve said it before and I will say it again: Nothing is sacred, as proven by the increasing number of things we can now call non-fungible tokens, which include everything from a photo of Britney and Madonna kissing to Hello Kitty herself. (Side note: I recently learned that, according to Sanrio, Hello Kitty is not a cat and am still recovering.) Now, joining the NFT-sphere? Harry Styles’ viral cardigan.

Fashion-focused NFT platform xydrobe, which Teen Vogue describes as a “sort of Christie’s for virtual fashion,” is launching a digital copy of Harry Styles’ viral cardigan, designed by JW Anderson, which took 300 hours to “generate.”

If you missed the era in which this particular Harry Styles’ fit became famous, let’s briefly revisit. In a perfect storm of an enthusiastic embrace for hot, cis men wearing gender-neutral clothing and a foam-at-the-mouth American exuberance for craftcore during the lockdown era, Harry wore a knitted, rainbow cardigan from JW Anderson's Spring 2020 men's collection before a TV performance and it became an overnight sensation. The cardigan was so viral that it sparked a crocheting trend on TikTok; the hashtag #harrystylescardigan has 87.3 million views to date and there’s no shortage of knockoffs on Etsy knitted by fans. Even JW Anderson blessed the knockoffs, making the knit pattern available to the public. The cardigan was even acquired by the V&A museum in London that same year, hanging next to other historically significant items of clothing. It’s only fitting that its mythology takes its next steps into the NFT world.

“At xydrobe, we provide a place for brands to have their rare and valuable designs recreated digitally. With our knowledge of the luxury space, as well as our skills, and understanding of VFX, we are able to do so without compromising on integrity and vision,” Nell Lloyd-Malcolm, xydrobe CEO said in a statement. “Introducing our platform to the world with such a pioneering brand, and a piece that captures a pivotal cultural moment, is a dream come true.”

It’s also a good way to keep “the kids” into NFTs. Because if there’s anything that’s going to spark my interest in something I still can’t say I fundamentally understand nor can explain to anyone, it’s the Harry Styles cardigan.

There’s not a lot of info yet on when, where, or how to bid on the NFT, but you can sign up for updates on xydrobe’s website. Until then, watch TikToks of Styles’ fans crocheting, below.

NEXT UP
Culture
An Exhaustive Breakdown Of The Balenciaga Controversy
The Art Issue 2022
True Life: My Partner Is Obsessed With NFTs
Culture
Mowalola Teams Up With Bratz For A Daring, High Fashion Collection
Fashion
Reformation & Canada Goose Team Up To Warm You Up