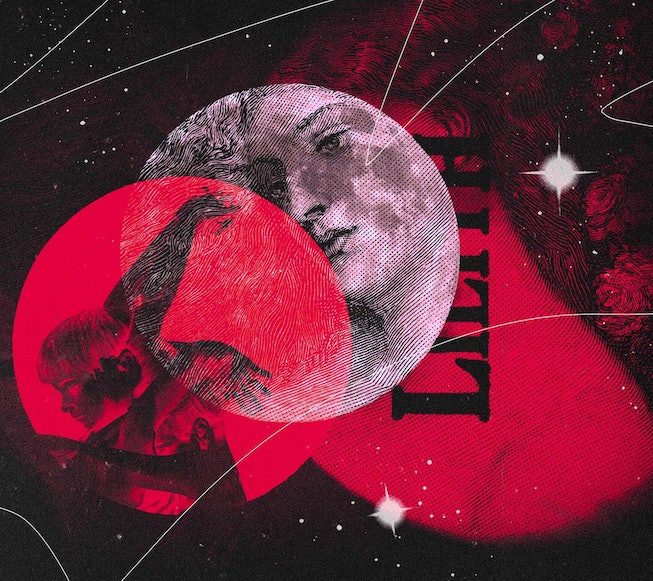 This ought to be good: Starting January 8, Black Moon Lilith, the astrological avatar of feminine exile and revenge, enters Leo. After an explosive 2022 tour of Cancer, Lilith takes to the domain of talent, purpose and power, not leaving the Lion’s kingdom until October 3. What retribution will the First Slayer claim in Leo? How will the backlash blow out on the global stage, and in your chart?

In its orbit of the earth, the moon collects and reflects our stories, a roving feminine archetype of wisdom and empathy. But at its farthest point in its elliptical orbit, its deepest plunge into the void of space, the moon enters Lilith’s dark dimension. This “black moon” represents the unseen, uncanny, and abject: the verboten desires, erased stories, and subsumed power we rarely bring to light.

As Barbara Black Koltov writes in The Book of Lilith, the archetype of the vengeful, “wanton night hag” dates back beyond the Garden of Eden, to the third millennium B.C.E. Mesopotamia, evolving through Egyptian, Hittite, and Israelite mythologies. Every culture needed to demonize the creative and destructive powers of female sexuality, and took great liberties with tales of screeching seductresses who’d procure men’s seed out of wedlock and steal children from their beds. A queer icon who haunted “wells and latrines,” as Koltov writes, Lilith would land her starring role as Adam’s original mate in the Garden of Eden, made of the same clay and believing herself to be his equal. Naturally, when God and man established their hierarchy, Lilith found herself subordinated and gaslit. Banished for questioning authority, Lilith would embrace her exile in the desert, living to fight another day as an immortal icon of repressed and reclaimed feminine power, a specter of righteous devastation who would reverberate forever through culture’s most iconic wronged women.

Wherever Lilith lands in your chart, she demands payback. Look to her sign placement and house positioning to help you uncover a primeval wrong which must be avenged, however messy the proceedings.

In April 2022, Lilith entered Cancer — the sign of the mother — and her brand of vengeance would be immediately relevant in the global reproductive horror story which was about to ensue. In Cancer, Lilith reveals the dangerous power of creating life; she incarnates as “mad” (and ultimately vindicated) mother-destroyers like Medea, or X-Men’s Madeline Pryor. In 2022, Lilith emerged in the U.S. and Iran, as protesters embraced fire, fury, and renewed opposition against turgid moral authorities. Gendered and reproductive servitude may be the oldest form of persecution, but, as Lilith recalls from her days in Eden, bloody rebellion goes back just as far.

Embodying the protective mother archetype, Cancer shelters those things we create — children, art, and any other form of divine expression — so that they may be safely delivered to the world. That birth, that awakening, is the call of the Lion. In Leo’s domain our gifts are embraced and realized, seen and affirmed, bound and armored in loyalty.

But what happens when there’s a crack in the mirror? Who do we become when our way to glory is blocked? Somewhere along the line, someone dismissed your talent. Or exploited it, defiled it, commodified it. Somewhere along the line, you got lost in the sale. And now, Lilith has come to collect her due. This Lilith takes the form of grand, delusional dames who won’t go down quietly, no matter how society has dismissed them or dusted them off: shattered silent-picture legend Norma Desmond (Gloria Swanson) in Sunset Boulevard; fallen Angel Madison Lee (Demi Moore) in Charlie’s Angels: Full Throttle; Mass-media zealot Fiona (Parker Posey) in Josie & the Pussycats; B-list fame-climber Jenna Maroney (Jane Krakowski) on 30 Rock and, of course, sitcom survivor Valerie Cherish (Lisa Kudrow) on The Comeback.

Refusing to move on with the times, to fit in or disappear, these fading stars fight eternally to stay relevant, ensuring their immortality in the annals of queer tragedy. They’re heroes. The directors, critics, and executives who hold power have deemed them passé, sad, reminders of their own lowbrow pasts. But for all their desperation, Fiona, Valerie, Jenna, and their sisters are originals, each one of a kind, with the tenacity to endure long after their facetuned replacements drift away. “I am big!” Norma Desmon erupts. “It’s the pictures that got small.”

Just because anyone with the body, the boyfriend, or the viral account can have the spotlight, doesn’t mean they should. And somebody’s going to have to bring them down. As Jupiter hits Aries, rewarding authentic points of view, Lilith unleashes voices suppressed, restrained, or deemed abject. The future of the human race doesn’t need you to bend and compress yourself to fit the algorithm, but to scream and rage in service of your originality. Fran Lebowitz argued that talent is the one currency which can’t be bought, learned, or inherited. It’s time to defend yours — especially when it gets ugly.

And, to be clear, it’s not only the ways others have blocked our gifts; it’s how we’ve shut them away ourselves. Lilith in Leo will make us face our inner destroyers; those crushing parts which refuse praise, block opportunities, and keep ourselves small. You’ll have to creatively access your own penchant for self-annihilation to fully exorcise this demon.

In some tellings, Medusa’s deadly visage is a mark, or testament, of her violation by Poseidon. She wears her snakes like a glorious mane. Lilith, acting as the proto-Gorgon, won’t stop until they’ve seen what they’ve done to you, what you’ve become, and the power you now wield. Better give ‘em a show.

NEXT UP
Astrology
February 2023’s Full Snow Moon in Leo Embraces The Real You
Astrology
How to Use Astrology to Access Past Lives
Astrology
Your February 2023 Horoscope Is A Breath Of Fresh Air
Culture
For The Girls Of Forever Magazine, What's Forever Is Friendship
Style + Culture, delivered straight to your inbox.