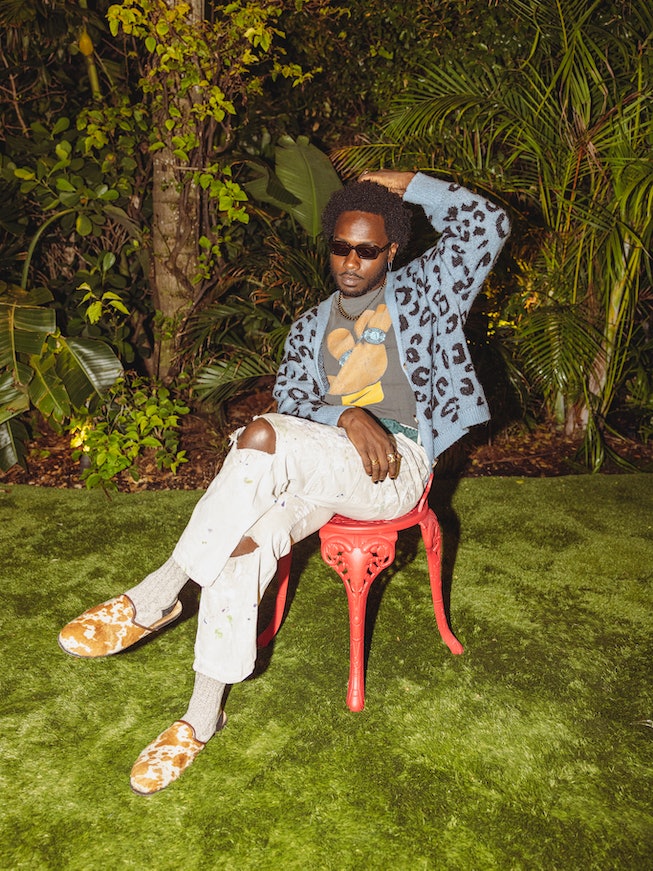 Channel Tres caught a red eye to Miami Sunday morning to perform at The Faena Hotel’s Red Bull Guest House, the party headquarters for the Red Bull team at the Formula 1 Miami Grand Prix. It’s an invite-only curated guest list of celebrities, influencers, and F1 fans and the midnight set is much anticipated, particularly coming off of Max Verstappen’s win for Red Bull that hot afternoon. The hotel is buzzing; a heightened Miami energy. For the rapper, things are more serene. A few weeks out from his first Coachella performance, a longtime dream for the Los Angeles native, as well as being newly (six months) sober, the party vibe has been swapped out for self-improvement. “It’s been a lot of meditating, lighting some incense, just chilling. Everything’s pretty lowkey,” Tres tells NYLON.

Hearing him discuss sobriety would tempt anyone to try it. “It’s really liberating because you get high on life. You actually enjoy what you do.” Preparing for a show now includes sleeping, listening to music like Thundercat and MonoNeon, and reading self-help literature on codependency and boundary setting. (It’s honestly…hot.)

“I’m learning how to not be in control of things,” he says. This applies both in friendships and in the potential of a new relationship. We talk about how hard it is to change those patterns once the relationship begins. Sunday’s show falls on Mother’s Day, so while he may call a friend before a show, this day, it was mom. (Also, hot.) Tres’ mom was present at his Coachella set, which he notes as his dream come true: “Seeing my family there dancing and having a great time, it was so beautiful.”

While L.A. is home and playing there is beyond compare, Miami remains a favorite place to perform. “They’re great and they love dance music.” For this show, Tres is workshopping a new song called “Six AM.” The Guest House is only the second time he’s played it and he’s eager to see the response. It goes on late in the set and to call it well-received would be an understatement; the crowd loves it. He also incorporated some notable choreography into the show, with two background dancers on stage with him adding a whole new element and energy.

While he’s been working with a stylist, a new addition to his team, he’s on his own in Miami. Tres defines himself as, “not really a brandy guy.” He prefers flea markets and vintage, no labels or designers, sunglasses, and rocks a thrifted baby blue cardigan with a large cheetah pattern that he plans to start the show in. It’s all about whatever feels good.

The evening continues on and Tres remains relaxed and effervescent, casually singing the chorus of Rick Astley’s “Never Gonna Give You Up.” Maybe it’s the proximity of the beach or the clarity of sobriety. While it’s still new, he’s starting to see the effects on his life and his work. It’s just the beginning. “Lot of feelings, lot of things. Nowhere to hide but you don’t wanna hide. It’s still the start of the journey, still finding out things, still discovering…”