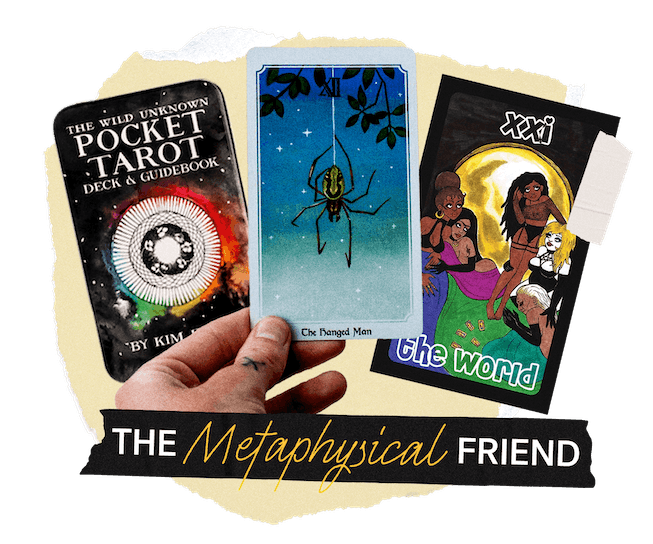 by Jenna Igneri and Layla Halabian
Updated: Dec. 2, 2022
Originally Published: Dec. 12, 2018
We may receive a portion of sales if you purchase a product through a link in this article.

'Tis officially the season for gift-giving. For us, that's a full month in which we'll be providing gift ideas for everyone on your list with our holiday gift guides. Next up: A selection of stunning tarot card decks for your most prescient friend.

When securing the perfect gift for your metaphysical friend, few things are as foolproof as a tarot deck. Each deck is conveniently sized and gorgeous in its own right — not to mention an extremely helpful aid in opening up new realms of reality and self-understanding.

Between the major and minor arcana, tarot represent the life lessons, karmic influences, archetypal themes, as well as the trials and tribulations that we experience on a daily basis. There's never been a better time to help a friend hone in on one's gifts of prescience, either. Yes, there is a tarot deck for every personality, and we've sorted through them all (and even consulted a professional astrologer, or two) to find the crème de la crème. Whether you're looking to gift a tried and true deck, like the Rider-Waite Tarot Deck, or an independently published masterpiece, there's a perfect tarot deck out there for both newbies looking to dip their toes into the complex world of tarot, and seasoned professionals, alike.

And a bonus? Pair your tarot deck with an intimate tarot reading from NYLON astrologer David Odyssey, offering archetypal, intuitive readings to spark dialogue and insight on any immediate questions, no matter how broad or specific.

See the best tarot decks to gift, below.

The Tarot de Marseille is one of the most popular tarot decks in existence, and this soothing rendition feels like a watercolor painting. It’s a fitting choice for the deck’s ethos, which encourages instinct and understanding of the suits and elements over imagery.

This striking, pocket-sized tarot deck comes in its own handy tin, and even includes a guidebook.

This moody tarot deck is inspired by nature and earth’s abundant biodiversity.

Metaphysical, but make it kinky.

This tarot deck explores man’s collective unconscious and its bearing on one’s personal life and growth. Can’t get more Aquarian than that!

According to Odyssey, Hermetic is “next level” and also beautifully brings in astrology.

A vibrant and diverse take on the major and minor arcana.

The one that started it all.

A tarot deck for the minimalist at heart. With gold foil on sleek, matte, recycled plastic, the Golden Thread Tarot was inspired by “the concept of the night, and the archetype of a single string that connected all things within the universe, threading images in a murky unknown.”

Take a dive into the collection unconscious. Developed by Dr. Robert Wang, The Jungian Tarot is a “visual gateway into the complexities of Jungian psychology” to aid in the process of active imagination proposed by Carl Jung. The figures are visually presented with archways and circular mandalas to aid in meditation, and the court cards depict family roles: father, mother, daughter, and son.

Matt Hughes’ gorgeous, hand-drawn illustrations draw inspiration from the Art Nouveau movement. And to add another level of elegance, each card shines with gold foil stamping.

This article was originally published on Dec. 12, 2018