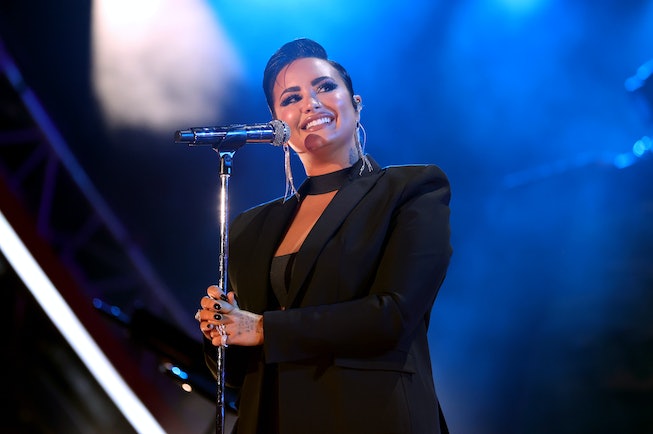 Demi Lovato has been responding to one too many DM slide-ins on their Instagram asking for partnerships. I love Lovato for their unapologetic embrace of all things extraterrestrial, but their latest partnership has verged from fun what-ifs to full, dangerous misinformation territory. On November 2, Lovato shared on Instagram that they’re partnering with Gaia, which bills itself as an “online resource of consciousness-expanding videos,” writing, “Understanding the world around us (the known and the unknown) is so exciting to me! Check out my stories to learn more!”

Harmless enough, right? No shame on anyone trying to get a bag. That is, until social media sleuths got wind of it and outed Gaia as being a hub of misinformation. Reported as being a “hub for QAnon influencers,” alongside videos of yoga and meditation are 9/11 conspiracy theory, anti vax, fluoride, chemtrails and anti-Semitic lizard people videos. No!

If we revisit the press release, there’s enough eyebrow-raising language that could indicate things weren’t exactly not conspiracy theory-adjacent. Gaia describes itself as is a “community that produces and curate's conscious media in four primary channels— Seeking Truth, Transformation, Alternative Healing, and Yoga— to its members in 185 countries.” (“Seeking Truth”? I don’t know about that one...)

"With Demi's fondness of Gaia and natural curiosity about the topics we cover, including extraterrestrials, meditation, and consciousness, they will be welcomed with open arms by Gaia's community,” said Suzanne Murtha, Gaia’s Senior Vice President of Sales.

It’s easy to see how Lovato could be drawn into this partnership. They love anything and everything “consciousness” and “extraterrestrial.” Lovato’s also been called a Lizard People-believer, but it’s hard for me to believe their brand of curiosity about the world is sinister. They believe aliens — er, sorry, extraterrestrials (aliens, they says, is an offensive term) — are forces for good, a topic they explore with other believers in their Peacock show Unidentified, which is a train wreck combo (you can’t look away!) of earnest cringe and tin foil hat. (You can read NYLON’s review of Unidentified here.)

“I also think that if there are civilizations that are of consciousness in other dimensions, which has given them the technology to be able to travel through space, I think that they are looking for nothing but peaceful encounters and interactions,” they said of ETs. “If they wanted us gone, we would have been gone a long time ago!”

I’m more likely to believe Lovato’s team just didn’t vet this one thoroughly. That being said, Lovato has yet to disavow Gaia — and if they don’t, their whole alien quest takes on a different tone.