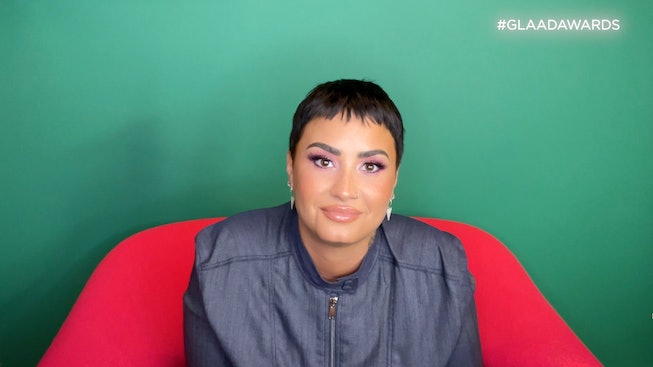 Demi Lovato is the latest celebrity to get into the podcast game. The debut of the new podcast 4D With Demi Lovato also came with a personal disclaimer from the singer: "I want to take this moment to share something very personal with you," Lovato said at the opening of the episode. "Over the past year and a half I've been doing some healing and self-reflective work, and through this work, I've had the revelation that I identify as non-binary."

Lovato also announced a pronoun change to they/them, adding that it brings the most fluidity to their gender expression. “[It] allows me to feel most authentic and true to the person I both know I am and am still discovering," they added.

Lovato is no stranger to being hyper-candid with their fans. They’ve openly discussed their battles with disordered eating, as well as addiction and their 2018 overdose, the latter two being the focus of their YouTube documentary, Demi Lovato: Dancing With The Devil.

Lovato brought on non-binary South Asian performance artist Alok Vaid-Menon as 4D’s inaugural guest. It was actually one of Vaid-Menon’s poetry readings, which Lovato attended with fellow non-binary artist Sam Smith, that sparked Lovato’s journey toward their non-binary identity. Vaid-Menon helped define and contextualize non-binary people for the podcast listeners, noting that the experience is in no way new. "We are people who have existed for thousands of years, who actually experience ourselves outside of the idea of man or woman," they explained.

Vaid-Menon also mentioned an ugly truth: that people could misconstrue Lovato’s announcement as a ploy to gain attention or further their career. Frankly, Lovato could not care less.

"I could leave my career today. I'm still going to identify as non-binary tomorrow,” they said. “For the first time in my life, I'm putting my well-being over my career. That's the difference in somebody doing something for attention versus seeking your truth. I know that not everybody's going to love that this is me and this is my truth. I know that some people are going to react out of fear."