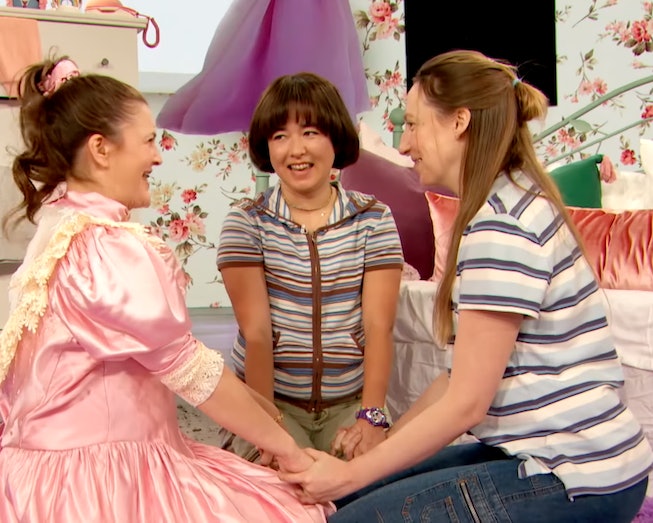 One of Drew Barrymore’s most iconic roles is Josie Gellar, or ‘Josie Grossie,’ a journalist who goes undercover as a high school student in the seminal 1999 film Never Been Kissed to “research teen culture.” Josie is most people’s worst dream personified: going back to high school, but being just as weird and unpopular as you were the first time around. Josie is totally stuck in the ‘80s and wears all the wrong things, but like any good rom-com goes, she ends up with a hottie at the end.

Barrymore, on The Drew Barrymore Show, reprised the role of Josie on Monday to interview some fellow teen nerds — Maya Erskine and Anna Konkle of PEN15, which just aired its second and final season on Hulu. Barrymore describes Maya and Anna as “just two gals not unlike many of us who found a way to turn those teenage awkward years into this extraordinary show.” She continued: “I thought a fitting way to display my love and admiration of these women was to get into my own inner awkward girl who is the best representation of how I felt growing up.”

On the set of a teen girl’s room, Barrymore became Josie Grossie again, complete with an over-the-top ‘80s dress, an unmatched earnesty, and a side ponytail. Maya and Anna walk in, in character, and the three sit on a purple shag rug for the interview. Often, press around a show feels so monotonous, but interviewing Maya and Anna in character is so fitting for this show, where the two play 13-year-old versions of themselves, amidst of a cast of actual middle-schoolers. And seeing these three beloved nerds together in some very sweet fan fiction feels so generous to viewers.

In the interview, which will make you nostalgic for sleepover gossip, Josie does the running man and whips her ponytail around and Anna and Maya demonstrate grinding. Josie reveals she’s never been kissed and the three discuss the value of bed frame knobs and mirrors for kissing practice. They don’t all agree that frosted tips are hot on boys. They end the interview all in a circle holding hands, where Josie says: “The power of three girls can be extremely successful.” Cute!

Watch the entire interview, below, and stream both Never Been Kissed and PEN15 on Hulu