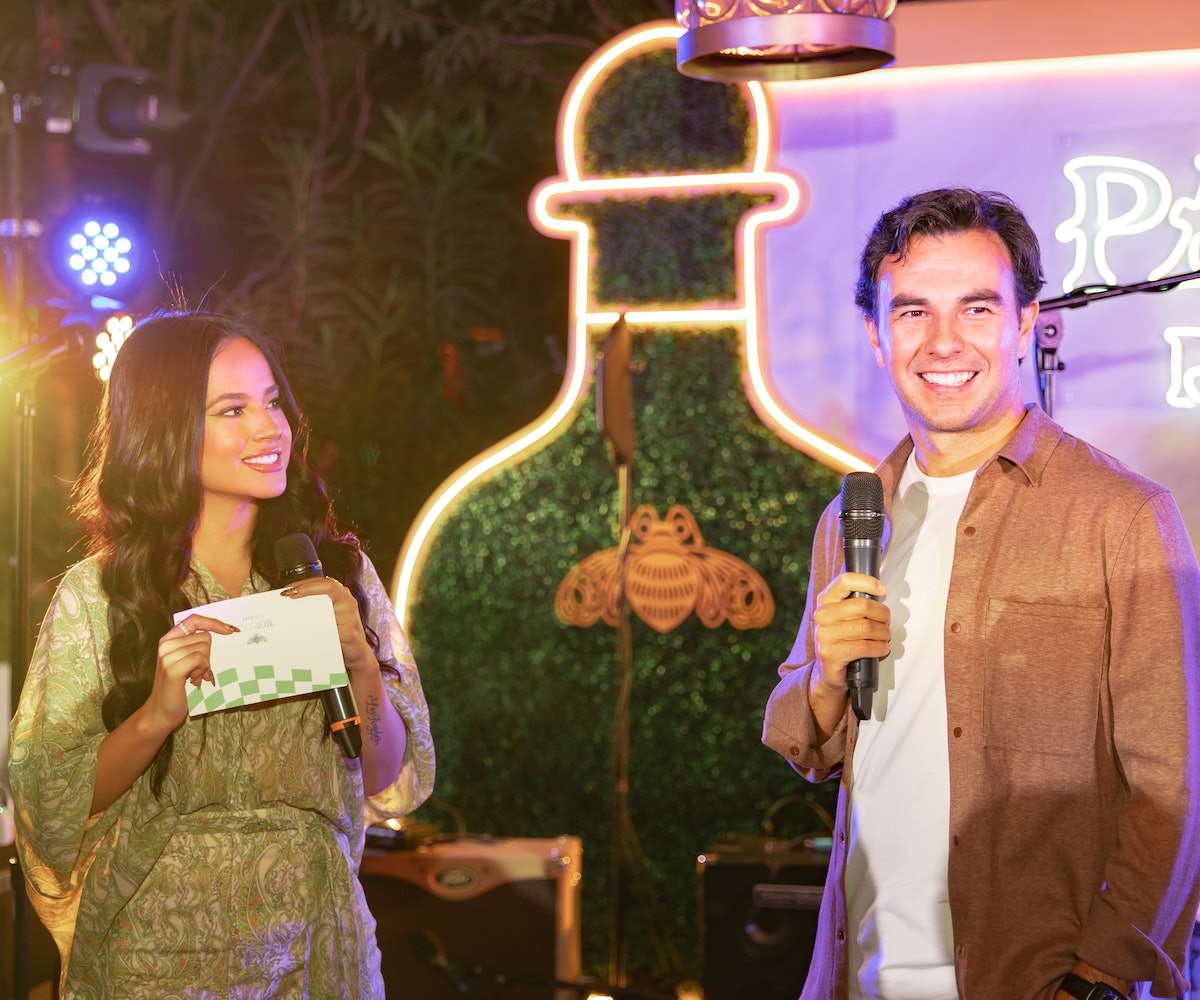 WHO: Aside from an invite-only guest list of media editors, there were also a slew of F1 fans, athletes, and celebrities including global superstar Becky G, Mexican racing icon Sergio “Checo” Perez, and Vanderpump Rules stars Tom Sandoval & Tom Schwartz

OVERHEARD: “He’s so hot.” – literally everyone to every F1 driver

THE VIBE: Almost six months after Formula 1’s Red Bull celebration held in Miami back in May, the U.S. Grand Prix took to the stands at Circuit of the Americas in Austin, Texas. As a relatively new F1 fan, I was ecstatic to attend the U.S. Grand Prix, an invite I received by none other than the world’s biggest tequila brand, Patrón. With one of F1’s beloved drivers Sergio “Checo” Pérez as brand ambassador, I had the honor to both anticipate Perez’s pending success at the race and to celebrate his team’s (almost) guaranteed winnings at the city's finest destinations.

The weekend festivities officially commenced that Thursday evening. After hopping off the plane and getting settled at the Hotel Van Zandt beforehand, Patrón treated its guests to a lavish meal before heading to Soho House right in the heart of downtown Austin. There, Pérez held an intimate meet-and-greet situation before heading out for the official Patrón-studded pre-game. While on top of the venue’s decorated rooftop, the Red Bull driver was seen chatting about the upcoming days with fellow ambassador and singer Becky G, and after a round of cheers with cocktails in hand, the Soho House members and guests spent the rest of the night immersed in dancing to a live band and bracing for on-stage karaoke.

Friday was a much-needed calm before the storm, to say the least, as we all headed back to Soho House’s rooftop for a cocktail tasting hosted by Vanderpump Rules’ Tom Schwartz and Tom Sandoval. After a day of drinks and relaxation, Saturday finally marked F1’s official pre-qualifying races held at Austin’s Circuit of the Americas track – and for those who don’t know, all 20 drivers on the grid are given 12 laps to solidify what place they start on the official day of the race. Luckily, inside Patrón’s VIP Paddocks was filled with tons of food, games and drinks, on top of a glorious view of the straight track right above the teams’ pit stops. For pre-qualifying, Patrón also took its guests closer to the tracks from behind the fences; seeing the action up close made my entire evening.

The official competition on Sunday saw a bevy of F1 fans, with COTA hosting a record-breaking 440,000 fans at the track from all over the world. Before the race, we got a chance to take a ride around the track and look into the pit stops. Spirits were up but tensions were high as dedicated onlookers anticipated how their sought-after drivers perform, but as expected from the rigorous sport that is F1, a few fan-faves unfortunately crashed and were eliminated from the race, like Ferrari’s Carlos Sainz, who spun off-track seconds after the green light.

It comes as no surprise that with the rising interest of F1, the sport is now co-signed by the industry’s biggest A-list spectators and luxury brand sponsorships. Many were in attendance at the U.S. Grand Prix including the ranks of Chlöe Grace Moretz, Madison Beer, Pharrell, and Ashley Graham. The biggest celebrity spotting was none other than Brad Pitt though, whose face popped up on every giant screen out at the venue. By the end of the 56-lap race, Red Bull took home the crown with Max Verstappen in first and Sergio Pérez in fourth. Shaquille O'neall made a surprise appearance and gifted the team with the trophy on a bull-shaped float, and we were lucky to get an up-close view of the podium from Patrón’s VIP paddock where Verstappen, Mercedes’ Lewis Hamilton, and Ferrari’s Charles Leclerc were doused in champagne showers.

The final night of Patron’s celebrations ended at the Red Bull celebration held at Austin’s Mayfair nightclub. The night was spent alongside the team’s closest friends and biggest fans celebrating not only Verstappen’s win but Red Bull’s constructor’s championship, too. There were, of course, tons of tequila flowing through the crowd and bass-beating sounds at the party lasted into the very early hours of the morning. Coming back to New York on an afternoon flight still hungover from the past four days was not on my 2022 bingo card, but I definitely wouldn’t trade this experience for anything else. If there’s anything I learned this weekend is that Texans really do know how to throw a hoedown, and yes, I have been officially converted into a Patrón fan, too.

Disclosure: Patrón hosted a press trip, providing travel and accommodations, for me to cover the Formula 1 (F1) Paddock Club.

NEXT UP
Culture
NYLON Party Report Card: Partying With The Stars & 94 Foot Long Whale At The Natural History Museum Gala
Culture
The White Lotus Will Return For A Third Season
Ask A Witch
Ask A Witch: How To Survive The Holidays With Hoodoo Magic
Culture
Megan Fox’s Dreamy Vintage Gaultier Dress & More Party Photos You Missed