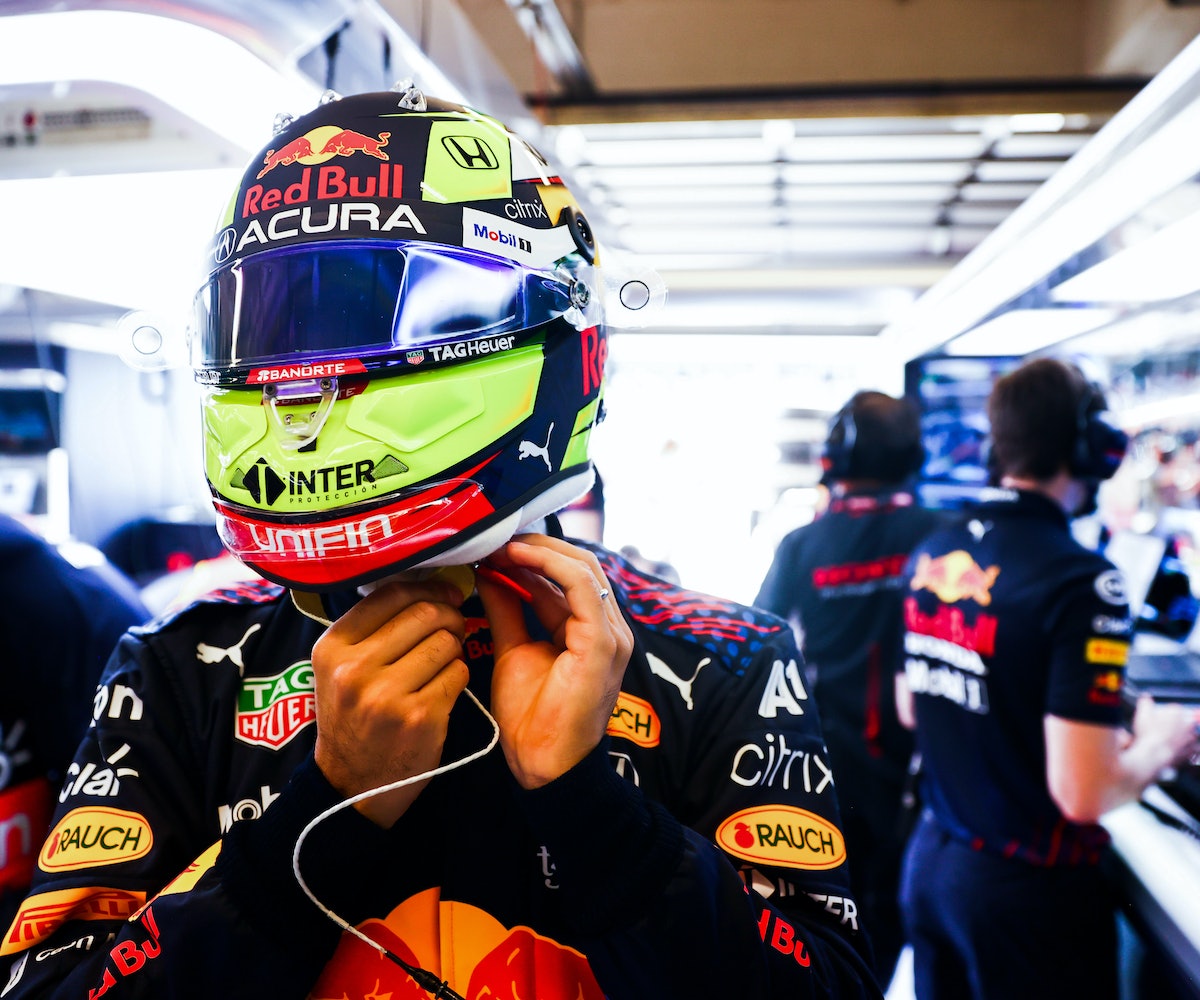 Just hours after landing at the Austin airport, I made my way to Soho House located at the heart of its bustling downtown. The Formula 1 U.S. Grand Prix was right around the corner and the festivities were already underway ahead of the city’s biggest night.

While seated for a roundtable discussion in an elaborate, larger-than-life (and my bank account, for sure) suite floor on the second floor, I clutched my phone in one hand and a tequila cocktail in the other – a Paloma, if you’re wondering. Soon after, Sergio “Checo” Pérez dominated the room sporting a matching beige set and a white tee, a more comfy approach than his usual tracksuit attire.

Pérez, one of the F1’s most emblematic drivers of the moment, is known for his daring yet smooth-sailing techniques, currently representing the Red Bull team. In over a decade, he has been crowned the three-time Grand Prix winner and first-place champion of the Monaco Grand Prix. Austin breeds ground for superfans unlike any other as the race, held at Circuit of the Americas, marks the 20th race in the F1 season as it nears its finish.

Hailing from Jalisco, Mexico, Pérez shares his early beginnings in the sport, one that has long been in his family. “I started racing when I was probably six years old, but I learned to drive when I was four years old,” he shared. ”My family was always involved in motorsports since my dad worked with [a] famous race car driver from Mexico.”

Though the sport has long been around and has since accumulated a devoted international fanbase, F1 racing has just recently stumbled upon mainstream popularity in America, with much of its new-found success attributed to Netflix’s docuseries Drive to Survive. “This sport has definitely grown massively, not just in the U.S. but all over the world, and we can see how much it has grown. It’s great,” he said.

Since rising to F1 stardom, Pérez now serves as a brand ambassador for Patrón, and as the only Mexican driver on the grid, it’s a pairing that makes for the perfect match. “It's amazing to be able to work with worldwide brands like Patrón because as an athlete, you always strive to partner with these big, iconic brands,” he said.

The U.S. Grand Prix was a huge accomplishment for both Pérez and his team. After ranking fourth this past weekend, and his charismatic teammate Max Verstappen leading in first place, Red Bull secured its first constructor's title in nine years – with the hope to continue the winning streak in Mexico in the following week.

Ahead of his recent competition in Austin, read more from Pérez as he chats with NYLON about Red Bull’s strategy for the race, his experience working alongside Patrón, and more, below.

I know this season has been super extreme and tough, but you've been really hitting it off on the grid! First of all, I have to ask: How did you prep for the race here in Austin? What exercises or rituals do you usually do ahead of time?

I actually don’t really have a routine, to be honest. Ahead of the weekend, I arrive early and try to be as relaxed as possible before all the commitments start with sponsors and with the media on Thursday. Then on Friday, it's all about focusing on the racing.

It's a great feeling. Being able to feel that you're in control and that you can do what you want with the car. The closeness with your car…knowing that you can trust him and vice versa… you feel like [the car] is really more like a person, you know? It's so important [to maintain this relationship] because it's obviously your life on the line.

You say you treat your car like a person – do you have a name for the car?

No, no [Laughs]. Because our car is always changing and it’s pretty much a different person every race, every week.

After the Japanese GP and now that you're in Austin, could you share a snippet of what the team strategy is looking like?

I hope we are able to carry the same form we've been able to have throughout the season. If we're able to do it here, [the team] is aiming for the constructor’s championship and the weekend will be amazing for the team, but it’s not all that we want to think about. We just want to be focused and hopefully get a strong result.

As a part of the Red Bull team, it's obviously not just about the cars but also known for its energy drinks. And not to mention, you're a brand ambassador for Patrón as well, so I know you must also love tequila! If you were only stuck between the two, would you rather crush a can of RB or a shot of tequila before a race?

Oh, that’s a good question [Laughs]. I will say maybe Red Bull before the race and a shot of tequila after.

I know you have years of memories but if you had to choose, what is one of your favorite moments that you've had?

Earlier in my career, I remember driving all around Mexico with my dad and my brother. Also, I really enjoyed my time driving in Formula 3 because with F1, it's all very different because it's a lot of politics involved. It's a big worldwide sport and it's great. But you realize how hard it is, and sometimes, I miss when it was just pure racing.

As an outsider and a relatively new F1 fan, I'm curious to know: how do F1 drivers celebrate after a long day out at work? What kind of celebrations do you usually opt for, and what can we expect to see from you off-duty this weekend?

Well, that's the thing because sometimes, you are able to stay in one place but for the most part, once we finish the race, we have to quickly travel to the next destination. I try to be with my family as much as possible because we have such limited time with them. For this week, in particular, many of the drivers are staying in Texas on Sunday because we're heading to Mexico next weekend for the upcoming race, and it just so happens to be right there. But certainly, when there’s time, I celebrate with some Patrón tequila.