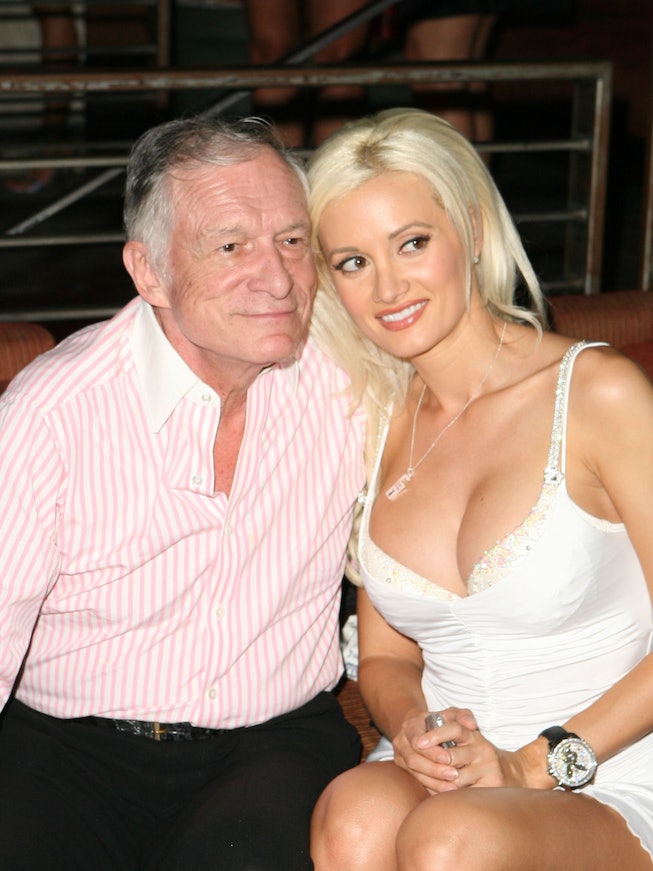 The more we learn about Hugh Hefner, the more demonic he is. Holly Madison, former girlfriend of Hefner and star of E!’s The Girls Next Door is on a singular mission to speak her truth and uncover the dark underbelly of Playboy. She is extraordinary candid in her 2015 memoir Down the Rabbit Hole: Curious Adventures and Cautionary Tales of a Former Playboy Bunny, on TikTok, and even more so in the recent 10-part A+E series Secrets of Playboy, which reveals the extend of the disturbing and abusive treatment of women at the hands of a company they were told would empower them.

Now, Madison is spreading the gospel truth of the darkness of Playboy on her podcast Girls Next Level, which she hosts with former girlfriend and Girls Next Door star and bestie Bridget Marquardt.

“He wouldn’t move. He would be like a bump on the log in the middle of the bed,” Madison said, of having sex with Hefner. “We thought of it as a chore that we had to do or else we’ll get kicked out of the house. Everybody just wanted to make it go by as quickly as possible.”

Madison went on to talk about the infamous required group sex that women were coerced into at the mansion. “I can’t explain to you guys how embarrassing that whole routine was, especially as we got later down the road when there would be a lot of conflict with the other girls,” Madison said. “You’re literally sitting there naked having sex in front of a group of people who hate you and talk sh*t about you while you’re having sex — and you can hear it. It was just like hell.”

Madison continued, saying she felt there was “no other option” than to move into the mansion and “be a girlfriend” after the first night she and Hefner were intimate.

In the Secrets of Playboy docuseries, it was revealed that there were countless reports of rape and physical assaults in the mansion, and that Hefner also engaged in beastiality; everything that is revealed about this man paints him to be increasingly monstrous. Madison said she stayed in the mansion for eight years because of “Stockholm Syndrome.”

Girls Next Level premieres August 22 with two episodes, where they also dive into the 2000s LA nightclub scene, what it was like posing nude for the first time, and their first visits to the Playboy mansion. You can listen here.

NEXT UP
Culture
Phoebe Dynevor Will Not Return for Bridgerton Season 3
Culture
Succession Season 4 Trailer Explodes With Family Drama
Culture
Spice Girls May Reunite For King Charles’ Coronation
Culture
The Cutest Couples At The 2023 Grammys
Style + Culture, delivered straight to your inbox.