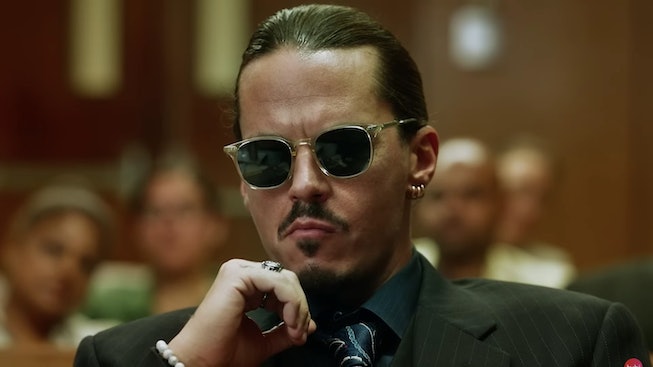 Despite the fact that the Johnny Depp and Amber Heard trial was only a few short months ago (not to mention, as of very recently, still being played out), there is already going to be a movie about it. And no, we’re not talking about the documentary, which premiered in July on NBC News — but a fictionalized retelling.

Tubi, the least relevant streaming platform, released an official trailer for the film Hot Take: The Depp/Heard Trial on Wednesday, which stars Mark Hapka of Days of Our Lives and Megan Davis of Alone in the Dark. It premieres Friday, Sept. 28, on the platform.

The film follows the relationship between the couples two months prior to the trial, which found both parties guilty of defamation. (Depp will be paid $15 million in damages, but the jury’s decision was split, finding that they also awarded Heard $2 million in compensatory damages after discovering one of the three statements at the center of Heard’s lawsuits was defamatory.) Social media was a big point of contention throughout the trial, as it was overwhelmingly negative towards Heard.

The film appears to take some language from the trial itself, as well as some creative liberties. “This is not life — no one should have to go through this,” Hapka as Depp says in the trailer. “I have the right to say what happened to me,” Davis as Heard says. In one scene, they’re making out. The film alludes to the effect the media had on the trial, with an off-brand TikTok app showing a woman saying: “Girl just wants some attention.”

People are desperate for profit as we know, and making a movie based on something that is still happening is like when Hillary Clinton released a memoir called What Happened the month after losing the 2016 presidential election, or Andrew Cuomo releasing a memoir about how he conquered the pandemic before a vaccine even arrived. These desperate cash-grabs only come off as embarrassing and inaccurate, and it’s a safe bet that this film will be the same.

Nevertheless, Tubi persists. According to Variety, the platform fast-tracked the movie into production “to capture a timely take on a story that became part of the cultural zeitgeist, painting a unique picture of what millions watched play out in the headlines over the summer,” according to Tubi chief content officer Adam Lewinson.

Hot Take: The Depp/Heard Trial is out on Friday. In the meantime, you can watch the full trailer here. (Or not.)