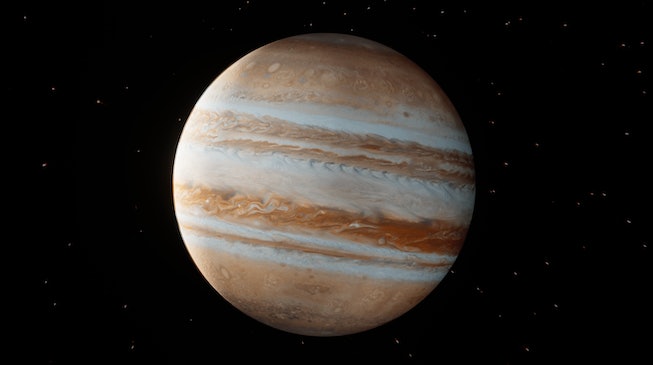 Thanks to meme accounts and fear-mongering astrology, a planet undergoing a retrograde is met with pure trepidation. Astrology should never induce panic, especially a transit as commonplace as a retrograde; for starters, Mercury goes retrograde a few times each year, and most outer planets spend months at a time “moving backward” in the sky. As one of the aforementioned outer planets, Jupiter stationed retrograde on July 28, and will continue to move through Aries and Pisces, until November 23. Yes, a four month long retrograde is quite a stretch of time, but this transit is not the undertaking you may expect it to be. Instead, it’s a time to do some rigorous spiritual inventory and prepare to make the most of the planet once it stations direct once again. Find out everything you need to know about 2022’s Jupiter retrograde in Aries and Pisces, below.

Jupiter is the great benefic of the cosmos, magnifying everything it touches and imbuing it with abundance and luck. “Jupiter is named after the king of the gods, who hurled lightning bolts of intuition from the heavens and roamed freely among his human subjects, seeking coital pleasures and adventure without boundaries,” writes astrologer David Odyssey. “Wherever the planet goes, it’s showtime, with a grand cosmic spotlight on a certain area in your chart.”

Jupiter in Pisces is a powerful astrological transit; in its sign of exaltation, Jupiter in Pisces launches us into the realms of the unknown, through the cinematic imagination, per Odyssey. When Jupiter moves through Aries, the first sign of the zodiac, the transit “drops us back into our bodies, and into the immediate sensation of action and desire.”

Jupiter begins its retrograde in Aries on July 28 until it returns to the Piscean waters on October 28. From there, it will station direct on November 23. This retrograde may feel like a stall on the pure fire of the previous months, so take this transit as a chance to review, especially when Jupiter returns to Pisces. Remember that Jupiter is an outer planet, so the changes that this retrograde brings about are of a more gradual nature. With its retrograde through Pisces, Jupiter can help new inspirations or motivations becomes aligned more seamlessly into the bigger picture. Jupiter will finally return to Aries on December 21, where it will remain until May 16, 2023.

“On another level there is a tremendous amount of deja vu experiences inherent in the retrograde of Jupiter. Times and places of the past all blend into a continuous present. Consciousness expands through these two dimensions simultaneously, and often without limitation. He does not know how to mind his mind totally inward to a fine point of focus. Instead, he absorbs all the symbols of his thoughts from his environment, ultimately to learn that anywhere is home, and anytime is now. The more these outers symbols represent the truths he learned in a former life, the more comfortable he becomes.”