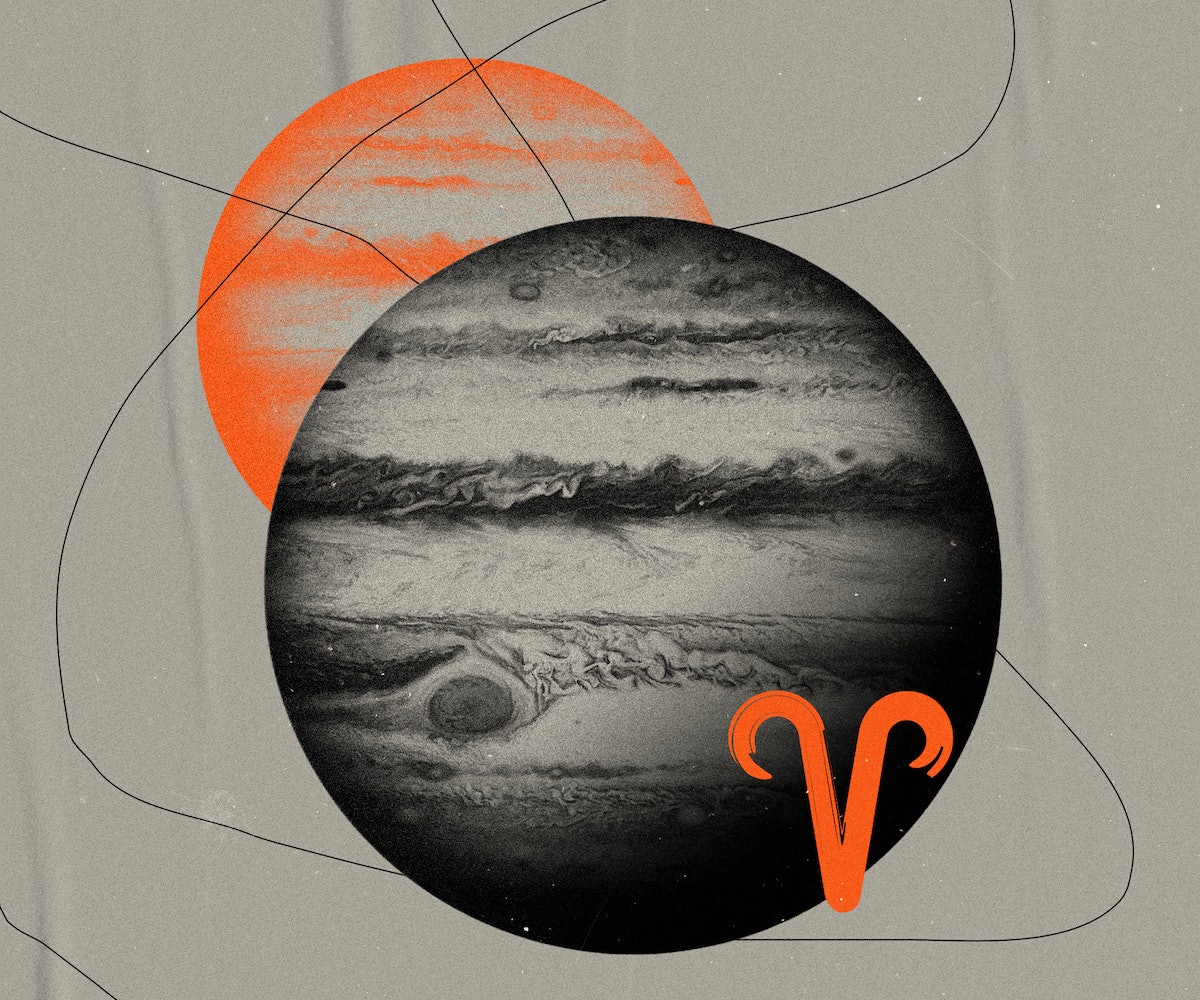 Summertime begins in earnest on May 11 as the great planet Jupiter enters Aries, staying in the fire sign through October 28. For the first block of 2022, the planet of wisdom and expansion has been in Pisces, the grand ocean where all of human history washes up. In Pisces, Jupiter has inspired the return from isolation to communion, melting hardened feelings, dreams, and possibilities from the ice. The Piscean connection has nearly drowned us in a tidal fury of hyper-empathy and then dissociation. But one way or another, we’re all we’ve got.

This summer, we crawl out of the ocean (or the void) and return to dry land, and the direction of our own two feet, as Jupiter enters Aries for a summer vacation. While in the sign of individuality, drive and new beginnings, Jupiter inspires action, and starts the new decade in earnest. What does this shift from global to personal signal, from watery enmeshment to fiery courage, mean for you? How do retrogrades affect Jupiter’s progress? Read our Jupiter in Aries 2022 guide below to meet this epic transit in full gallop.

As the largest planet in our solar system, Jupiter acts as a beacon of light, power and synthesis wherever it travels. If the sun is the main character of your chart, Jupiter is the exalted self: the Jedi in harmony with the Force, the Avatar mastering all four elements, the One freezing bullets with his hand. Wherever Jupiter lands in your chart, it opens a gate to expansion, through travel, study, and experience.

Because Jupiter tends to spend about a year in every sign, its transits help elucidate larger cultural changes without getting too macro (Uranus) or generational (Pluto). For its early 2022 tour, Jupiter has melted the boundaries of consciousness in classically Piscean fashion: dredging up the past (And Just Like That); pushing ecstasy to disenchantment (Euphoria); warping time (Severance) and reality (Everything Everywhere All At Once). Pisces is the final sign of the zodiac, the source wall at the edge of the universe, the synthesis point of all lessons learned. Jupiter’s time here has brought us to a saturation point, where the last twelve years of human development are melded, subverted and cannibalized. Everything is postmodern, overstimulating, and exhausting.

But before Pisces can fully detach us from reality, Aries marches in to save the day. The first sign of the zodiac launches the spring, and with it a surge of sexual and creative inspiration. If Pisces links us to the one consciousness, Aries rips out the cord and returns us to our bodies. The Aries pantheon includes the Vampire Slayer Sarah Michelle Gellar, warrior princess Lucy Lawless, spy girlie Jennifer Garner, and bonafide romantic Sarah Jessica Parker. To be clear, this is the sign of the protagonist, the star, the one who answers a higher calling.

Jupiter’s time in Pisces has brought with it grim prophecies for climate change and global conflict; it’s become cliché to complain about the end of the world. Count on Jupiter in Aries to deliver us new heroes, artists, and visionaries who’d rather build a better world than complain about the old one. Aries is the sign of battle, and at its healthiest vibration, sparks combustive energy through confrontation and conflict. Saturn’s current transit through Aquarius has locked us into a paralyzing culture echo chamber, fueled by isolation and misunderstanding. Gaining momentum as it charges forward, the ram can’t be canceled — and doesn’t care who gets offended. Just take a look at Aries legends like Lil Nas X, Quentin Tarantino, and Camille Paglia for proof.

Clearly, the existing cultural order needs a shakeup. Though the new decade is two years underway, its growth has been vastly stunted — for obvious reasons. Jupiter in Aries wakes us up from the collective dream and launches us on our own individual paths. The age of reacting to the world around us, and then virtue signaling about it, is over. In Pisces, Jupiter has revealed the corruptions and distortions of a globally connected social media. Once in Aries, the planet of wisdom inspires you to cultivate your individual point of view, to stop commenting and start creating. Grant Morrison writes in Supergods that “the only thing that made me, or any of us, special was that no one in the whole of history would ever see the universe exactly the same way any other of us saw it.” What calls to you — and only you — regardless of the consequences?

Jupiter last transited Aries throughout 2010 and 2011, another cultural interregnum, a static transition after the financial crisis burned down the old world order of the Bush years. Of course, two fire sign champions, incapable of subtlety, took the reins and charged ahead: the Sagittarius Nicki Minaj with her world-dominating debut Pink Friday, and the Aries Lady Gaga, with her blunt, batsh*t magnum opus Born this Way. But while the queens took the limelight in a transition year, the great artists of the decade were busy cooking the future: a then-indie darling named Lena Dunham was filming her new series Girls; Marvel was preparing to put all six of its Avengers in one movie for the very first time; and Charli XCX, Grimes, Azealia Banks, Lana Del Rey and Frank Ocean were preparing their first great works, largely in anonymity. All of this would come to release, and culmination, in 2012, when Jupiter hit Taurus.

Consider this summer, and then Jupiter’s early 2023 dip into Aries, as a similar period of new creative involvement. The world is in a fugue, and needs your specific talent, or knowledge, or experiences to wake it up. Don’t think yet about the rewards of your efforts: Aries doesn’t have time to stop and consider the payoff. The focus is on action, combustion, and anything that excites or stimulates you. This time next year, when Jupiter hits Taurus, you’ll be releasing something new into the world, and shifting the cultural discourse forward. Stop complaining. Start doing.

Though Jupiter transits Aries from May 11–October 28, it will only be direct (as in, not retrograding) from May 11 through July 28. Consider May, June, and July as the time for maximum adventure. Jupiter loves travel and new stimulation, so book any trips, courses or training that can open up your world. Aries, meanwhile, gets off on contact, so take every invitation, hit every party, and show up for every date. Each new impact fuels the next conquest. Bravery will be rewarded.

Jupiter retrogrades in Aries beginning July 28 until it returns to the Piscean waters on October 28, where it will then resume its direct course on November 28. Once this retrograde begins, you’ll likely feel a stall on the pure fire of the previous months. Consider this a review, especially when Jupiter returns to Pisces, when you can align any new inspirations or motivations into the bigger picture. Jupiter will return to Aries on December 21, where it will remain until May 16, 2023. This is your time in the studio, to plan what comes next.

Of course, even when Jupiter is unbound in Aries, other planets will be stuck in their own backwards rotations, among them Mercury (May 10–June 2 and again September 10 through October 2) and Saturn (June 4–October 23). Like last summer, this one promises to be confusing, full of starts and stops, false beginnings, and dreams dashed. But Jupiter gains mastery through all forms of experience, and what you learn in the transitions, or silent moments, will further strengthen your new course. Cherish every lesson and enjoy the silence, but don’t question your calling, or get off the horse. The new decade is only just beginning. Why stop yourself now?